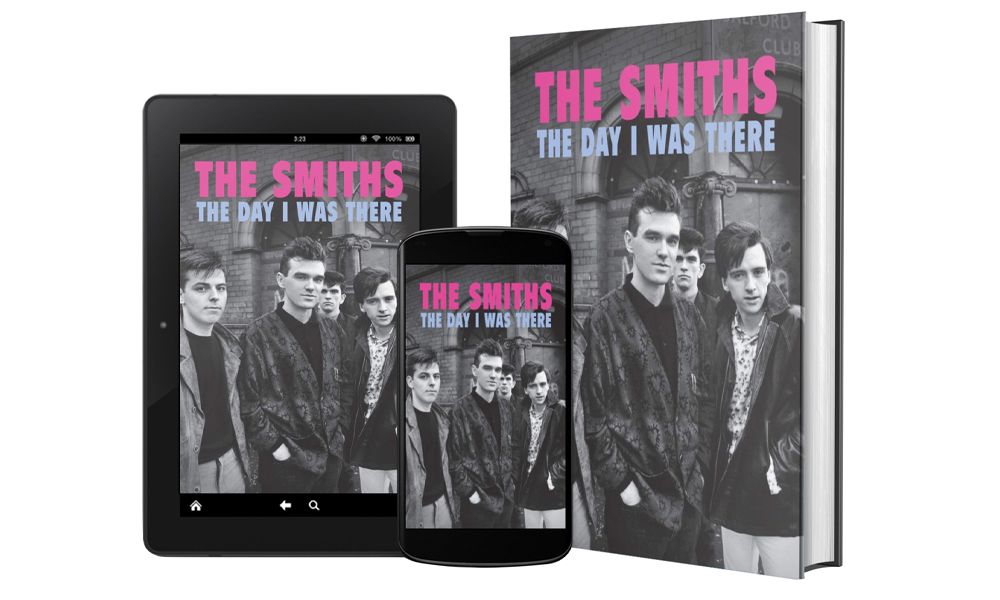 The Smiths – The Day I Was There tells the story of The Smiths in the words of over 400 fans from Britain and the US. With memories from the earliest Smiths shows at UK clubs through to the last ever gig at London’s Brixton Academy, you’ll see a portrait of The Smiths from the perspective of fans, promoters and support acts with personal photographs, memorabilia, fascinating anecdotes and stories that have never been published before.

Based on the songwriting partnership of Morrissey and Marr, The Smiths are one of the most important bands to emerge from the British independent music scene of the 1980s.

All four of their studio albums reached the top five of the UK Albums Chart, including Meat Is Murder which hit number one. They won a significant following and remain cult favourites. The band broke up in 1987 due to internal tensions and have turned down several offers to reunite.

Richard has also co-written a book about the ‘semi legendary’ indie band The Wedding Present with lead singer David Gedge, and worked with Orchestral Manoeuvres in the Dark on their book, Pretending To See The Future, as well as books about the Rolling Stones, The Beatles, The Who, Pink Floyd, Led Zeppelin and Jimi Hendrix, all of which are compilations of fan memories of seeing these legendary artists live.

In the excerpt from the book below, we travel back to July 1985, as photographer Stephen Wright snaps The Smiths outside Salford Lads Club.

I took the photograph of The Smiths outside Salford Lads Club that was used for the sleeve of The Queen is Dead. The shoot really should have gone to a big-name photographer – an Anton Corbijn or a Pennie Smith – but it went to me, a fan using my first Nikon with the ‘wrong’ lens. I’d sent Rough Trade pictures of the band playing, and Morrissey liked them. The first Smiths live show I shot was in 1984 at the Free Trade Hall. I was so skint I could only afford one reel of film and had to walk a long way home. From this show I caught the shot of dead flowers hanging from Morrissey’s jeans. My favourite live shot is of Morrissey waving flowers above his head. I took it from the side of the stage hidden in the lighting rig.

More live shows followed and then Rough Trade asked me to shoot the Salford Lads session. Morrissey wanted an iconic Manchester location. We also tried Victoria Station but it was too dark, so we ended up at Salford Lads Club. It was shot on a cold, dark, winter day – yet somehow it has a darkness that sets the right mood. You can see Johnny Marr shivering in some shots. I like the casual, staggered way they are standing, and they’re nicely framed by the arches. But I always say it’s the band, not the photo, that is classic. Morrissey has a Mona Lisa expression: it’s neither a smile nor a smirk, but he’s very much in command. If you look at the body language, you can tell he was king of the pack.

My darkroom was also my bedroom. I kept my processing chemicals in old lemonade bottles. I think the cheap equipment, and the fact there was so little light, gave the photo a grittiness, like a 1950s picture.

Morrissey ultimately chose the picture for the sleeve. He sent me a postcard afterwards to say thank you. It was written in his famous spidery handwriting: ‘A sweeter set of pictures were never taken. I smiled for a full minute (phone Roy Castle – that’s a record).’

Apparently it’s the most famous photo of The Smiths and that makes me smile. Fans come from all over the world to recreate the shot. The round trip from the centre of Manchester is probably £25 by cab, so I’ve done my bit for taxi-drivers over the years. Years later I’ve got to go into the Salford Lads club and meet the people there, which has been a real honour. I gave an image to the Salford Lads Club to raise funds and they managed to raise over £60,000 from t-shirt sales using it.

I love it that people enjoy the image years later and that I caught them at their magnificent peak. I count myself as very lucky, as a huge fan, to have got the opportunity to see and shoot them live and then to get to meet them and produce the Salford Lads image. Of all the bands I shot it was The Smiths I loved seeing most and none of the albums really beat the atmosphere of their live shows.