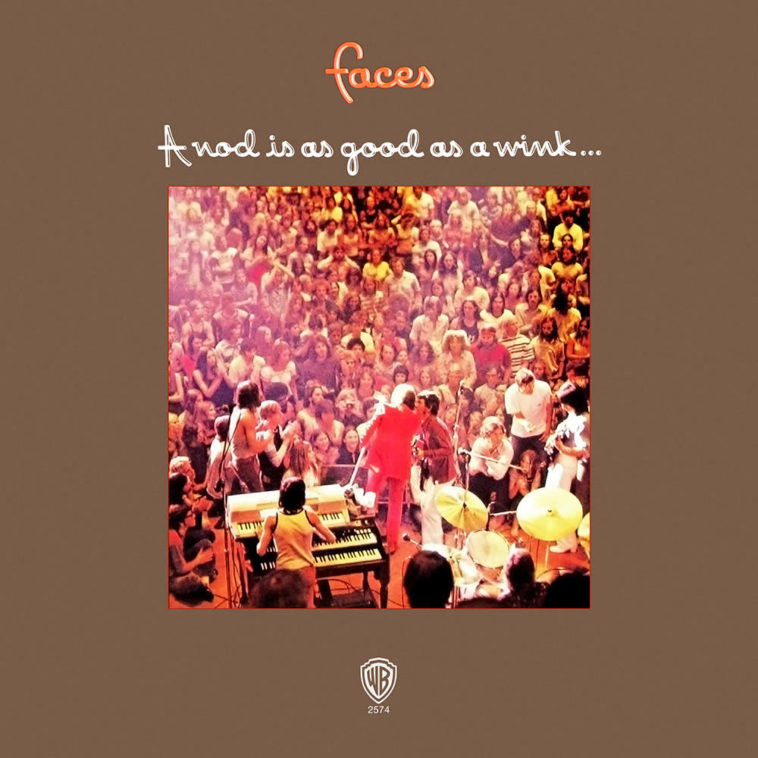 Given a preference, The Faces always chose to be onstage or in a pub (ideally on stage in a pub) rather than inside a studio. However, A Nod… comes very, very close to capturing the band’s loose-limbed live spirit. It’s messy but cohesive at the same time. Stay With Me sounds more like a barroom bust-up than an actual song, while Too Bad is a throat-scorching shot of the piano-driven hard stuff.

As well as the UK hit single, Stay With Me, which got to #6 in December 1971, the album’s opener, Miss Judy’s Farm, That’s All You Need, plus bass player Ronnie Lane’s eclectic songs Debris and You’re So Rude (co-written with keyboardist Ian McLagan), are all absolute Faces classics.

A Nod’s As Good As A Wink… To A Blind Horse was their third album and their second of 1971, following the charming but uneven Long Player, which mixed group originals with some live recordings from New York’s Fillmore East. Those live recordings, though, included one of the best things The Faces ever did, a version of Paul McCartney’s Maybe I’m Amazed, the vocal started off by Ronnie Lane and brilliantly followed through by Rod Stewart.

But A Nod’s As Good As A Wink… was a far more disciplined affair, marshalled at Olympic Studios in Barnes, south London, by the notoriously authoritarian Glyn Johns, a man with strong views about how rock’n’rollers should behave in the studio. Johns had worked with The Small Faces, so knew three of the band but not Stewart or lead guitarist Ron Wood. In the Faces biography Had Me A Real Good Time he is quoted as saying: ‘I was terribly impressed with Ronnie Wood, who I hadn’t known prior to those sessions and I was thrilled to be reunited with the rhythm section again.’

Recording began at Olympic during September and October, interrupted only briefly by a triumphant appearance performing at the Concert For Bangladesh at the London Oval on 18 September. The Faces more than held their own on a bill that included Mott The Hoople, Lindisfarne, Atomic Rooster, America, and The Who, whom even The Faces couldn’t upstage, although they did give them a run for their money, introducing a British audience to Stay With Me for the first time.

In the sleeve notes to the Faces 4-CD retrospective Five Guys Walk Into A Bar…, Ron Wood is quoted, talking about Stay With Me, ‘I had the structure of the song, but Rod knew where the breakdowns would be., how to shuffle the parts: verse here, the buildup, chorus there, interlude, back to verse.’ The jump in tempo at the end was, Wood notes, standard Faces procedure. ‘Most of our songs – Stay With Me, Miss Judy’s Farm, Too Bad – started in one groove, built up energy, then finished in double time. We’d go ‘Woooooaaahhh!’ till the song burst.’

Earlier that summer, Rod Stewart’s third solo album Every Picture Tells A Story had been released, breaking him wide open with a #1 hit on both sides of the Atlantic, and, although his solo success was eventually to cause a schism between him and The Faces, in the short term, it made them into a very hot property indeed, especially since Mac, Woody, Kenney, and Ronnie played on I Know I’m Losing You and Woody everywhere else on Rod’s album. This made anticipation for the third album from The Faces all the more eager and probably made it easier to get the first single on radio too.

Notwithstanding the need for a big album, Rod and Woody didn’t agonise too much over the writing process. Wood said later: ‘We didn’t do a lot of research. Rod would say ‘Do a riff in this tempo.’ I’d grind something out on slide guitar, and he would experiment with words. Miss Judy’s Farm and Stay With Me – they came from a riff and the first lyrics that came into his head. We did most of our writing in the dressing room before a show.’ Three years after the recording, Wood remarked to Barbara Charone that Stay With Me had been written in a Georgia hotel room (in March 1971), with Kenney [Jones] pounding away on the telephone books, so we had the feel for that one before we went into the studio.’

As mentioned, Stay With Me did get a positive reception, preceding the album by a week, and huge UK airplay saw it peak at #6 in the UK singles chart. It took a while longer in the US, but charted in January, rising to #17 on the Billboard chart.

Following the single, A Nod’s As Good As A Wink… was The Faces’ most successful album, peaking at #6 in the US, and reaching #2 in the UK. The original issue of the album came with a poster consisting of a picture collage, including images of pills and pharmaceutical capsules, as well as photos apparently taken on tour of band and crew members revelling with naked groupies in hotel rooms. Within weeks of release, the record company had second thoughts and re-issued the album without the poster, making original copies with the poster collector’s items.

The album cover shot was taken from the lighting rig above the stage at a 1971 arena show in Houston, Texas, at the now-defunct Houston Coliseum. As Ian McLagan noted in the sleeve notes to Five Guys Walk Into A Bar…, [photographer] ‘Tom Wright got credit for the picture, but he didn’t like heights. He asked Chuch [Magee, a longtime roadie for The Faces and later The Rolling Stones] to go up into the rigging and take it.’

The Faces’ career with the classic line-up of Rod Stewart, Ronnie Lane, Ronnie Wood, Ian McLagan and Kenney Jones, didn’t hang around too long, and when Stewart’s solo career kicked into gear, the band slowly became subservient to his personality.

Ronnie Lane had quit in 1973, and after a tour in 1974, the band called it a day. Ron Wood joined the Rolling Stones, drummer Kenney Jones eventually became part of the Who, Ronnie Lane formed Slim Chance and Ian McLagan became a sought-after session musician, joining both The Stones and Dylan on stage.

Still, The Faces’ influence is huge, with guitar rock bands from The Replacements to The Black Crowes taking their cue from the Faces as much as the Stones, while Steve Jones and Glen Matlock of The Sex Pistols were always huge Faces fans. The Faces have recently been fronted for some shows by Mick Hucknall, keeping Rod’s seat warm until he might choose to return, and the band’s reckless, loose and joyous spirit has stayed alive in much of the best rock & roll of the subsequent decades.