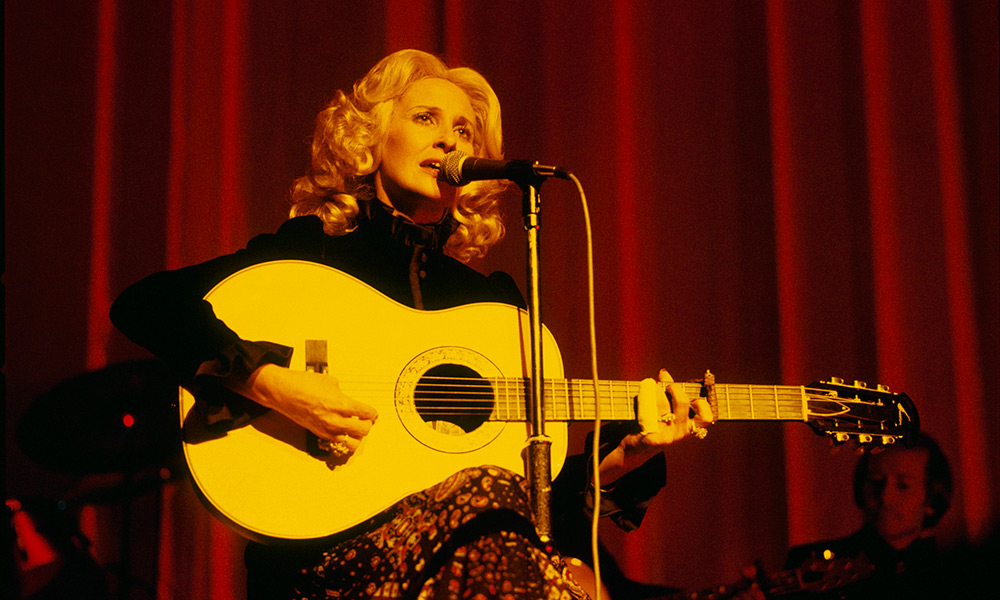 Wynette was called the First Lady of Country Music, and her best-known song, “Stand by Your Man”, was one of the best-selling hit singles by a woman in the history of country music. Many of her hits dealt with classic themes of loneliness, divorce, and the difficulties of man-woman relationships. During the late 1960s and early 1970s, Wynette charted 23 #1 songs. Along with Loretta Lynn and Dolly Parton, she is credited with having defined the role of women in country music during the 1970s.

Born Virginia Wynette Pugh on May 5, 1942, on a cotton farm in Itawamba County, Mississippi, Tammy spent her youth picking cotton, working as a beautician, a waitress, and a shoe-factory employee before her rise to stardom.

By the age of seven, Tammy was working the cotton fields along with other relatives on the family farm. Her father’s legacy – a piano, a guitar and the dream that his daughter would make music her life. Years later, Tammy would still keep a crystal bowl full of cotton in her home to remind her of these meager beginnings.

As a teenage bride, she found times even harder than she’d known at home. She had two children within three years and her husband, an itinerant construction worker, was unemployed more often than not. They were finally forced to move into an abandoned log house with no indoor plumbing.

Fed up with poverty and worn out from the drudgery of her life, Tammy enrolled in beauty school in nearby Tupelo, funding her schooling with money given to her by her mother. (Never believing her own hype, Tammy kept her beautician’s license up to date regularly noting “she could always go back to hairdressing.”)

After becoming a beautician, Tammy moved to Birmingham, Alabama, where she gave birth to a third daughter, a 1 lb. 8 oz. premature baby who suffered a near-fatal bout with spinal meningitis before she was four months old. Her shaky marriage crumbled, and while getting a divorce she worked 10 hour days as a hairdresser, after getting up at 4 a.m. each day to sing on the local Country Boy Eddie TV show.

Beginning in 1965 she began making regular trips to Nashville meeting producers and trying to attain a recording contract. In 1966, after months of rejections and on the brink of giving up, she made the daring decision to move to Nashville anyway. She had no job, no place to live, and three small children totally dependent on her.

She eventually auditioned for Epic records producer Billy Sherrill who signed her and changed her stage name to Tammy. Her first single, “Apartment #9,” was released within weeks, hitting the charts almost as soon as it hit the record racks. Her next 11 albums went to #1 and within four short years, Tammy had won two Grammys and three CMA Female Vocalist of the Year awards.

No other female country singer conveyed the emotion of heartbreak like Tammy Wynette. She endeared herself to millions by singing about topics of everyday life – divorce, loneliness, parenting, passion. Her tearful singing style was the voice of every heartbreak a woman has ever known. Perhaps it’s that Tammy herself lived through such tumultuous times that she could convey the emotion of such weighty topics.

Like her career, Tammy’s personal life filled the papers. In 1968 she married her idol, George Jones, creating a union that captured the imaginations of country music fans like no other couple before them. For the next seven years, they lived, sang, wrote, recorded and performed in a romantic, stormy and much-publicized relationship that ultimately brought Tammy more headlines than happiness. Jones’ drinking sprees were almost as legendary as his music, and it was this problem that eventually destroyed the marriage. They had one child, Tamala Georgette, born in 1970.

On July 6, 1978, she finally found lasting happiness when she married her longtime friend, George Richey. The well-known songwriter had co-written several of Tammy’s chart-toppers and produced hits for Tammy and many other artists.

Throughout the next two decades, Tammy suffered a variety of health problems and underwent several operations. Still, she managed to rise to the top of the international charts once again when she teamed with British pop act KLF to create the dance hit “Justified and Ancient.” She continued her streak when she joined forces with Dolly Parton and Loretta Lynn on their landmark album, Honky Tonk Angels.

Eventually, her poor health caught up to her. Tammy passed away in her sleep at her home in Nashville, Tennessee on Monday, April 6, 1998. Three days later fans and members of the music industry honored her with a world-wide televised memorial service broadcast from Nashville’s Ryman Auditorium. Later that year, Wynette was elected into the Country Music Hall of Fame.