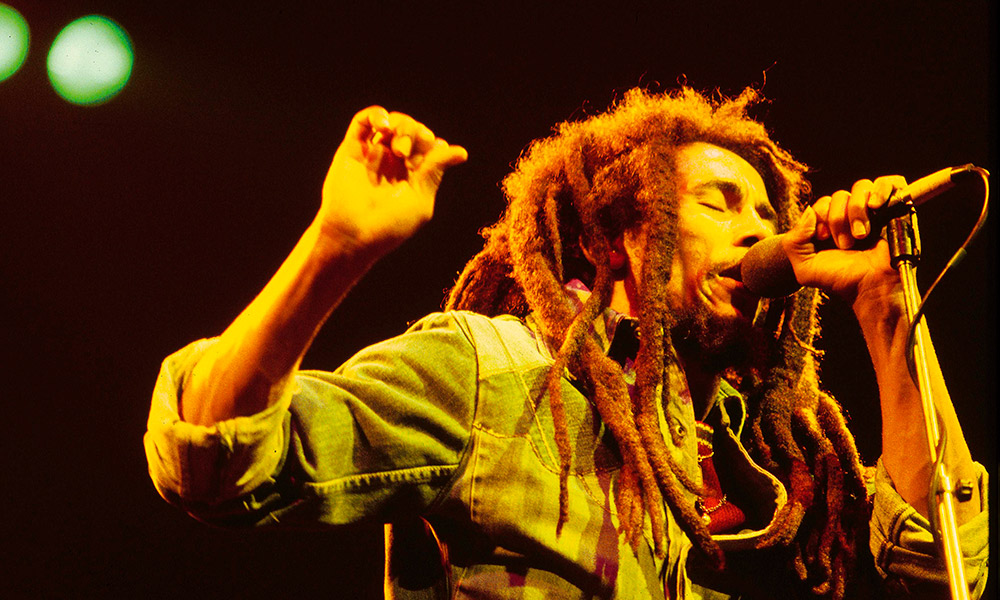 Marley’s influence is unparalleled, irrespective of race, colour or creed, he is credited with helping spread both Jamaican music and the Rastafari movement to a worldwide audience.

Bob Marley was born Robert Nesta Marley on February 6, 1945, to 50-year old white quartermaster Captain Norval Marley of the British West Indian Regiment and an eighteen-year-old black Jamaican woman, Cedella Malcolm, (the last time Marley saw his father was when he was five years old). He grew up in Trench Town in squatter-settlements that housed a minimum of four families, the teenage Marley quickly learned to defend himself against Trench Town’s rude boys and bad men. Bob’s street-fighting skills earned him the respectful nickname Tuff Gong.

By the early 1960s, the island’s music industry was beginning to take shape, and its development gave birth to an indigenous popular Jamaican music form called ska. A local interpretation of American soul and R&B, with an irresistible accent on the offbeat, ska exerted a widespread influence on poor Jamaican youth while offering a welcomed escape from their otherwise harsh realities. Within the burgeoning Jamaican music industry, the elusive lure of stardom was now a tangible goal for many ghetto youths.

Marley became friends with Neville “Bunny” Livingston (later known as Bunny Wailer), and later at 16 years old Bob Marley met another aspiring singer Desmond Dekker who introduced Marley to another young singer, Jimmy Cliff, future star of the Jamaican film The Harder They Come, who, at age 14, had already recorded a few hit songs. In 1962 Cliff introduced Marley to producer Leslie Kong; Marley cut his first singles for Kong: “Judge Not”, “Terror” and “One More Cup of Coffee”, a cover of the million-selling country hit by Claude Gray. All these failed to sell but Marley was now a full-time musician.

In 1963, Marley, Bunny Wailer, Peter Tosh, Junior Braithwaite, Beverley Kelso, and Cherry Smith formed a ska and rocksteady group, calling themselves “The Teenagers”. They later changed their name to “The Wailing Rudeboys”, then to “The Wailing Wailers”, at which point they were discovered by record producer Coxsone Dodd, and finally to “The Wailers”.

The Wailers recorded demos, toured the UK and signed a deal with CBS records, which was short lived. It was Island Records founder and producer Chris Blackwell who eventually paid for studio time for the musicians who delivered the album Catch A Fire which was released in 1973 and immediately earned worldwide acclaim.

The hits followed “Jamming,” “Waiting in Vain,” “One Love/People Get Ready”, “I Shot the Sheriff”, “No Woman No Cry”.

In July 1977, Marley was found to have a type of malignant melanoma under the nail of one of his toes. Marley turned down doctors’ advice to have his toe amputated, citing his religious beliefs. The final concert of Bob Marley’s career was held September 23, 1980, at the Stanley Theatre in Pittsburgh, Pennsylvania. Shortly after, Marley’s health deteriorated and he became very ill; cancer had spread throughout his body.

In December 1999, his 1977 album Exodus was named Album of the Century by Time Magazine and his song “One Love” was designated Song of the Millennium by the BBC. Since its release in 1984, Marley’s Legend compilation has annually sold over 250,000 copies according to Nielsen Sound Scan and has now sold over 10 million copies worldwide. In 1990, February 6th was proclaimed a national holiday in Jamaica to commemorate his birth.

As a musician and spokesperson for his generation, Bob Marley had the political drive of John Lennon, the poetic side of Bob Dylan and a groove coupled with hypnotic melodies that were unmistakably Bob Marley.

Important Dates In The Life Of Bob Marley:

On this day in music
ShareTweet
ADVERTISEMENT
Related Topics:Bob MarleyBob Marley And The Wailers
Click to comment