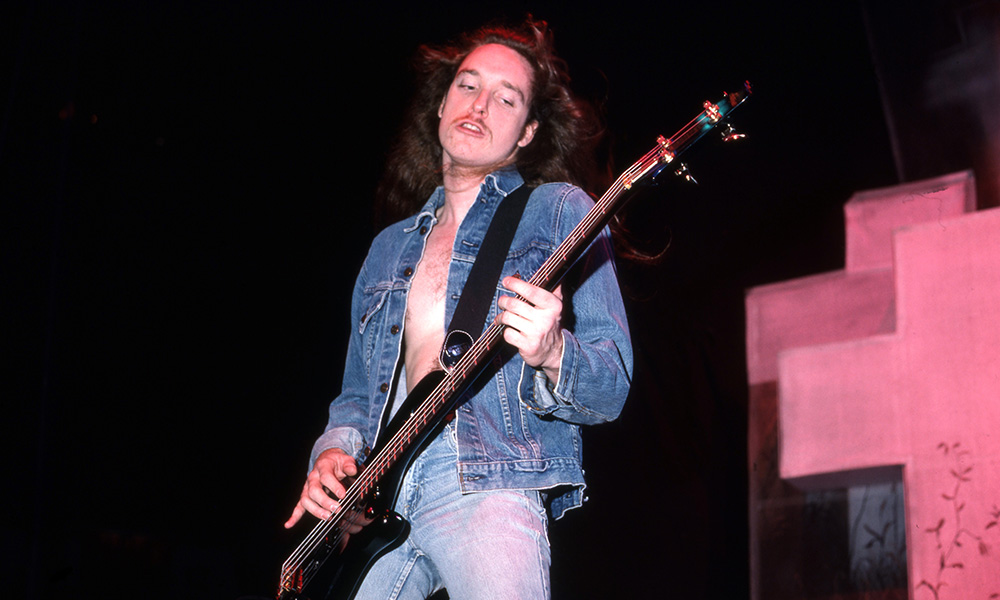 On 27th Sept 1986, Metallica bass player Cliff Burton was crushed to death after the band’s tour bus crashed between Stockholm and Copenhagen. During a European tour, members from the band drew cards for the most comfortable bunk on the tour bus, Burton had won the game with an Ace of Spades and was asleep when the tour bus ran over a patch of black ice and skidded off of the road. He was thrown through the window of the bus, which fell on top of him.

Burton was born on February 10th 1962, to Jan and Ray Burton. Ray was a native of Tennessee and worked as an Assistant Highway Engineer in the San Francisco Bay Area.

After leaving high school Burton joined local group Trauma. In 1982, Trauma traveled to Los Angeles to perform at the Whisky a Go Go, among those in attendance was his future bandmates, drummer Lars Ulrich and singer-rhythm guitarist, James Hetfield.

Both were impressed with his bass playing skills and Burton was asked to join Metallica. Apparently, he took some persuading, as he didn’t want to leave the Bay area.

Now a full-time member Cliff contributed largely in the songwriting department of Metallica performing on its debut studio album, Kill ’em All, (which was going to be titled Metal Up Your Ass).

The band’s second studio album, Ride The Lightning, showcased the band’s increasing musical growth along with Burton’s own songwriting abilities – he received credit on six of the album’s eight songs. One of the highlights of the album was the last track, “The Call Of Ktulu,” an instrumental that displayed Cliff’s “lead bass” approach.

1986 was also a very eventful year for Metallica. It saw the release of their 3rd album; they went out on the road supporting Ozzy Ozbourne for a US tour.

After touring the US, they headed over to Europe, continuing their Damage Inc. tour in support of the latest album, Master of Puppets.

On September 26th, Metallica played in Stockholm, Sweden. It was an especially great night for the band. It was the first time James resumed his rhythm guitar duties in months after he had broken his left arm. It seemed nothing could stop the mighty Metallica machine.

Metallica was en route on a road between Stockholm and Copenhagen, to their next gig that was scheduled for September 27th. Earlier that night the band drew cards for the assignment of the bunks on the tour bus. As fate would have it, Cliff drew the ace of spades and chooses Kirk Hammett’s bunk. Around dawn, the bus driver lost control of the bus and overcorrects with the steering wheel to get back on the road. The bus begins to skid out of control and rolls several times before coming to a halt.

Cliff was ejected and pinned underneath. The band scrambled out the bus to find Cliff motionless. The emergency services arrived along with a crane to lift up the bus, the band hoped Cliff could be saved. However, after lifting the bus up, a cable snapped causing the bus to fall on Burton again. According to Mick Hughes, Metallica’s sound engineer, no one was sure if Cliff was still alive at that point but after this terrible misfortune, nothing could save him.

Burton wasn’t just a metal bassist. He loved music and life. When travelling with the band in the tour bus it was always Cliff who commandeered the tape-deck, deciding what they would all be listening to as they ate up the miles that day. Special Cliff mix-tapes included varied selections from the likes of Lynyrd Skynyrd, Bach, Kate Bush, Simon & Garfunkel, Peter Gabriel, The Police, Velvet Underground, R.E.M., Stanley Clarke, ZZ Top and Motorhead.

On October 3, 2006, a memorial stone was unveiled in Sweden near the scene of the fatal crash. It is located by the parking lot to Gyllene Rasten.

Burton was posthumously inducted into the Rock and Roll Hall of Fame with Metallica on April 4, 2009.

Important Dates In The Life Of Metallica: