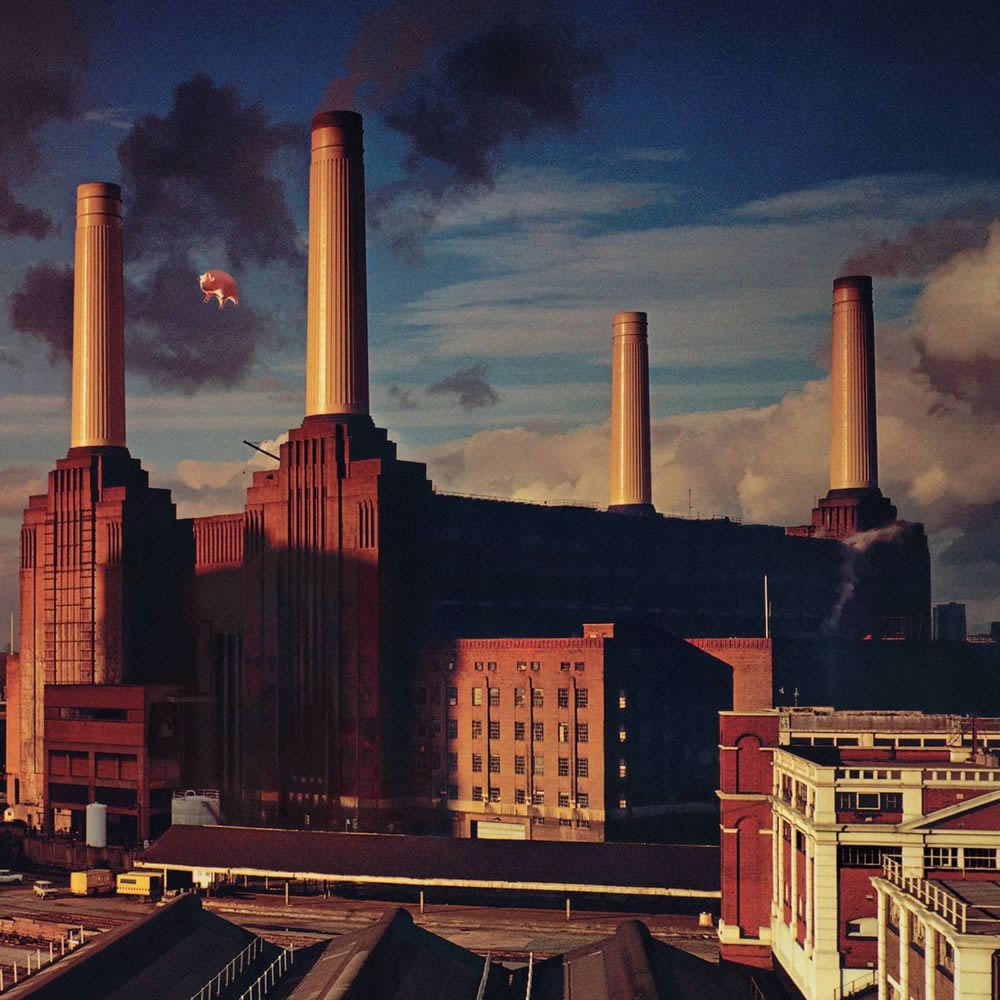 The genesis of the Animals album was in the writing rehearsals that produced Wish You Were Here. Working at Unit rehearsal studios, near London’s King’s Cross, Pink Floyd had created two songs that were ultimately left off the Wish You Were album: ‘Raving And Drooling’ and ‘You’ve Got To Be Crazy’.

With the emergence of the central theme that was to link together the songs to be included on Wish You Were Here, ‘Raving And Drooling’ and ‘You’ve Got To Be Crazy’ were set aside. The Wish You Were Here album and related touring were major successes, so Pink Floyd were able to dedicate time in 1975 to setting up their own recording studios, three linked spaces at 35 Britannia Row, Islington, London, and from Spring 1976 began recording their next album there.

Roger Waters’ Animals theme relates some humans as having the characteristics of three classes of creature: sheep, dogs and pigs, so accordingly the lyrics from the two existing songs were rewritten. Sheep was a re-working of ‘Raving And Drooling’, and ‘Dogs’ was a makeover of You’ve Got To Be Crazy, to which were added an acoustic ballad ‘Pigs On The Wing’, in two parts, and a further number, ‘Pigs (Three Different Ones)’.

Although the two parts of ‘Pigs On The Wing’ are very short, at 1:25 each, the other songs make up for it, ‘Dogs’ weighing in at an epic 17:04, ‘Pigs (Three Different Ones)’ at 11:22, and Sheep at 10:24. With a harder sound than the most recent Floyd albums, it was wrongly regarded by some as having been influenced by punk rock. Since it was written and recorded throughout 1976, when punk in the UK was only just getting started, it actually predated punk, but nevertheless reflected the mood of the times: dark and dangerous. In an ironic coda, in 1977 Nick Mason was to produce actual punk band The Damned’s second album Music For Pleasure at Britannia Row.

NME called it ‘One of the most extreme, relentless, harrowing, downright iconoclastic pieces of music this side of the Sun’, which didn’t prevent it from hitting the album charts in the UK at No. 2 and No. 3 in the US, going Gold there on the day of release. It went to No. 1 in The Netherlands, followed by Switzerland, France, Italy, Spain, West Germany and Portugal.

The album sleeve cover image of a pig floating between two chimneys on Battersea Power Station was conceived by Roger Waters and executed by long-time collaborators Hipgnosis, who organised the three-day shoot. On the first day, there was no need for the marksman who had been hired to shoot down the pig if it escaped its mooring ropes, but it took so long to inflate the pig that the photographers could only capture the building, in front of dramatic clouds. On the second day the pig was installed but did break free before it could be photographed properly, rising into the air and sailing away, untroubled by bullets, since the marksman hadn’t been rehired. ‘Algie’, as the pig had been dubbed, eventually came to rest in a field on East Stour Farm, Chilham, near Ashford in Kent. Finally on the third day, Algie was retrieved, repaired and lashed to the towers but the sky was less dramatic, so the final cover was a composite of Day 3 pig and Day 1 location. The image became one of Pink Floyd’s most iconic.

The In The Flesh Tour supporting the Animals album saw the addition to the band’s live lineup of Terence ‘Snowy’ White, who turned up at Britannia Row to audition for the band. Without having heard him play, they offered him a solo to link the two parts of ‘Pigs On The Wing’, which he performed on one of David Gilmour’s guitars. The solo isn’t included on the vinyl or CD versions of the album, but it was used to link the 2 parts on the 8-track cartridge version, which runs in a continuous loop.

It was also on the tour that an incident occurred which was to have a major consequence. On July 6th, the last night of the tour, at the Montreal Stade du Parc Olympique, the 78,000-strong crowd was so rowdy – screaming, yelling and letting off fireworks – that in sheer frustration Roger Waters ended up spitting at a fan. Horrified by the way in which his dreams of stardom had become an unpleasant reality, Waters’ musings on the schism between the musicians and their audience became the catalyst for the creation of The Wall.