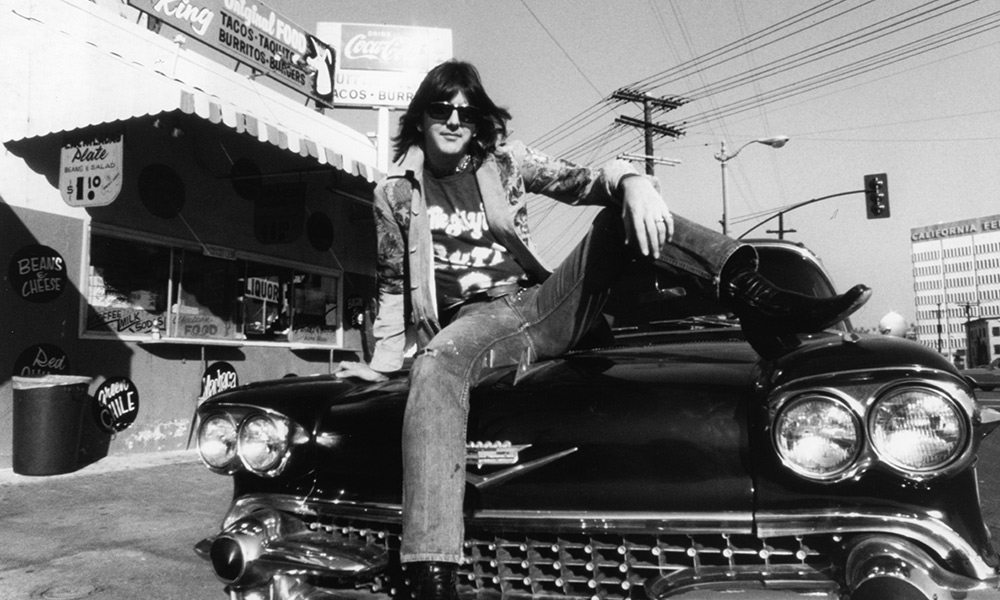 On 19th Sept 1973, country rock singer/songwriter Gram Parsons, formerly of The Byrds and The Flying Burrito Brothers, died under mysterious conditions in Joshua Tree, California at the age of 26. His death was attributed to heart failure but later was officially announced as a drug overdose.

His coffin was stolen by two of his associates, manager Phil Kaufman and Michael Martin, a former roadie for The Byrds, and was taken to Cap Rock in the California desert, where it was set alight, in accordance to Parson’s wishes. The two were later arrested by police.

This is one of the most bizarre tales in the history of rock and roll — but in fact, it was a very sad end to one of the most original performers who ever graced us with their presence. Parsons, I think, had he lived, would’ve been the Springsteen of country rock.

Born Ingram Cecil Connor III, his life changed after seeing Elvis Presley perform in concert in 1957. Five years later, while barely in his teens, he played in rock and roll cover bands such as the Pacers and the Legends.

He came from a wealthy background and attended Harvard University, where he studied theology but departed after a single semester. Despite being from the South, he did not become seriously interested in country music until his time at Harvard, where he heard Merle Haggard for the first time. In 1966, he and other musicians from the Boston folk scene formed a group called the International Submarine Band.

By 1968 Parsons had come to the attention of The Byrds’ bassist, Chris Hillman, as a possible replacement band member following the departures of David Crosby and Michael Clarke from the group; he passed an audition to join the group.
While in England with The Byrds in the summer of 1968, Parsons left the band due to his concerns over a planned concert tour of South Africa, citing opposition to that country’s apartheid policies. During this period, Parsons became acquainted with Mick Jagger and Keith Richards.

Parsons developed a close friendship over the next few years with Richards, reintroducing the guitarist to country music. According to Stones’ confidant and close friend of Parsons, Phil Kaufman, the twosome would sit around for hours, playing obscure country records and trading off on various songs with their guitars.

Returning to Los Angeles, Parsons formed the Flying Burrito Brothers with bassist Chris Ethridge and pedal steel player Sneaky Pete Kleinow. By this time, Parsons’ own use of drugs had increased and much of his time was diverted to partying with the Stones, who had briefly relocated to America in the summer of 1969 to finish their forthcoming album, Let It Bleed.

The early ’70s saw Parsons touring with Emmylou Harris as well as working with Neil Young and Linda Ronstadt. Parsons also recorded his final album, Grievous Angel, which included the standout and much-covered track “Brass Buttons” which was released after his death.

Before recording the album, Parsons played a mini-tour; the backing band the Fallen Angels included Clarence White. On July 14, 1973, White was killed by a drunk driver while loading equipment in his car. At White’s funeral, the distraught and drunken Parsons reportedly informed his tour manager Phil Kaufman that if anything happened to him, his final wish was to be cremated in Joshua Tree.

Gram Parsons had been hanging out at the Joshua Tree National Monument for several years. He went there regularly, with Chris Hillman when they were bandmates, and later with Keith Richards, to get high and watch the sky for UFOs.

Parsons died September 19, 1973, in Joshua Tree, California at the age of 26 from an overdose of morphine and tequila; although rushed to the Yucca Valley Hospital, he was pronounced dead on arrival.

And this is where it all gets a bit strange.

Parsons’ body disappeared from the Los Angeles International Airport where it was being readied to be shipped to Louisiana for burial. Prior to his death, Parsons stated that he wanted his body cremated at Joshua Tree and his ashes spread over Cap Rock, a prominent natural feature there; however, Parsons’ stepfather arranged for a private ceremony back in New Orleans and neglected to invite any of his friends from the music industry.

To fulfill Parsons’ funeral wishes, Phil Kaufman and a friend stole his body from the airport and in a borrowed hearse drove it to Joshua Tree where they attempted to cremate it by pouring five gallons of gasoline into the open coffin and throwing a lit match inside. What resulted was an enormous fireball. Police chased them, but the pair got away. The two were arrested several days later and were fined $750 for stealing the coffin.

The site of Parsons’ cremation was marked by a small concrete slab and was presided over by a large rock flake known to rock climbers as “the Gram Parsons memorial hand traverse”. The slab has since been removed by the US National Park Service and was relocated to the Joshua Tree Inn which was where he was staying at the time of his death.

He’s been called the father of country rock; he pioneered the concept of a rock band playing country music. Gram was not with us long enough, but he accomplished what he set out to do. He touched a vast array of musicians who have Gram to thank for loosening the invisible, yet powerful, restraints that shackled the music he loved so dearly.

Important Dates In The Life Of Gram Parsons: