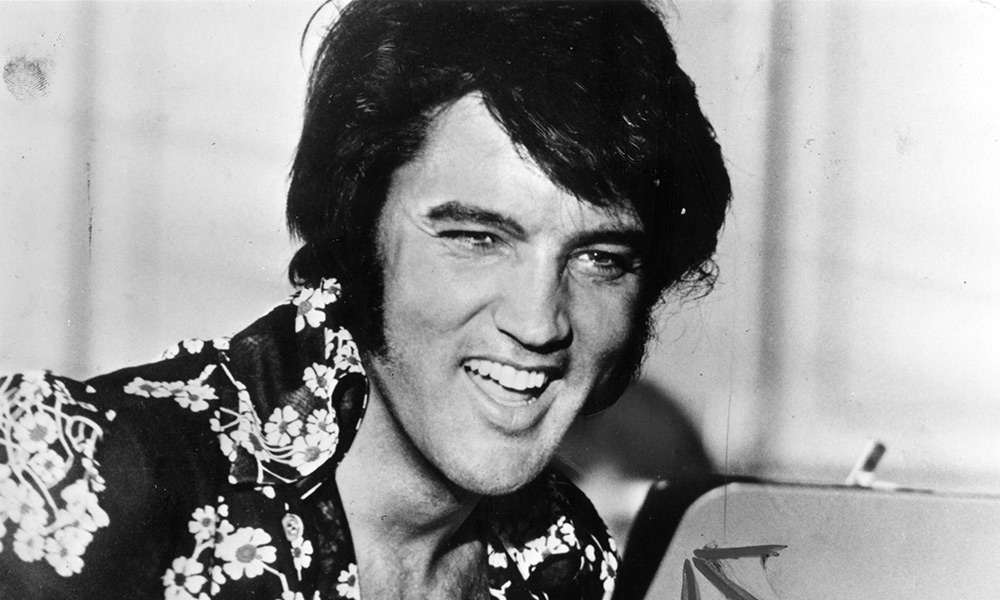 On Aug 16th 1977, Elvis Presley was found dead lying on the floor in his bathroom by his girlfriend Ginger Alden; he’d been sitting on the toilet reading The Scientific Search For Jesus. He died of heart failure at the age of 42.

The King of rock & roll dead at 42! I was 19 at the time and working at HMV records, the largest record store outside of London. I wasn’t important, in fact as well as making the tea, I worked the shrink-wrapping machine that all records were covered in before going out in the racks. This was well before the days of CD’s. Our stock consisted of vinyl, cassettes and 8-track cartridges.

I didn’t know of Presley’s demise until I arrived for work that morning. I was in shock, as was everyone else – except the boss. He saw a huge marketing opportunity. All the rival shops would soon sell out of everything Elvis, as would we. So, here’s the plan: Cossar and a mate can get on a train to London, (just over 200 miles away) and go to RCA records, and buy as many Elvis Presley records as you can fit into a black cab taxi. Bring them back on the train and HMV will be the only shop in the north of England with any Elvis records for sale.

I was terrified. Not only was I being forced to travel to London, (which I’d never visited before), but I had over £500 in cash tucked away in my jeans! I’d never seen so much cash. What if I was mugged? Or murdered? What if I lost the cash on the train?

Anyway, all went well and I returned that afternoon triumphant in my task. We returned with hundreds of Greatest Hits albums and sold every last copy.

But enough about me – Elvis was dead.

I can’t think of another performer who has been the subject of so much posthumous attention, so many urban myths and so many tales. Everything that needs to be written about Elvis has already been written. So it just leaves me to leave you with some facts about Elvis you might not know.

In 1960, after completing his national service and flying back to America, he stepped on British soil for the first and only time in his life when the plane carrying him stopped for refuelling at Prestwick Airport, Scotland.

Elvis made his first ever public appearance in a talent contest at the Mississippi, Alabama Dairy Show, singing ‘Old Shep’, Elvis was 10 years old at the time and came second.

He was fired from his job at Loew’s State Theatre during 1952 after punching a fellow usher who told the manager that Elvis was getting free candy from the girl at the concession stand.

Elvis Presley was a big Monty Python fan. His favourite film was The Holy Grail. It was in his video recorder when he died.

In 1957, Elvis was rushed to a Los Angles hospital after swallowing a porcelain cap from one of his front teeth which then lodged itself in one of his lungs.

Sheet metal worker Louis Balint punched Elvis at a Hotel in Toledo claiming that his wife’s love for the singer had caused his marriage to break up. Balint was fined $19.60 but ended up being jailed after he was unable to pay the fine.

In 1957, Elvis purchased the stately mansion ‘Graceland’ in Whitehaven, Memphis. He paid $102,500 for the property which had previously been used by the Graceland Christian Church.

In 1958, Elvis Presley’s ‘Hound Dog’, exceeded three million copies in the USA, becoming only the third single to do so ( Bing Crosby’s White Christmas & Rudolph The Red Nose Reindeer by Gene Autry being the other two).

In 1988, Hound Dog was named the most played record of all time on American Juke Boxes.

Elvis became the first rock ‘n’ roll artist to be honoured by the US Postal Service with a commemorative stamp.

In 1997, a report showed that Elvis was the worlds best selling posthumous entertainer. With worldwide sales over 1 billion, over 480 active fan clubs and an estimated 250,000 UK fans still buying his records.

In Switzerland it is illegal to cut a front lawn while dressed as Elvis Presley.

The lightest Elvis ever weighed as a six foot tall adult was 170 lbs in 1960 following his discharge from the U.S. Army. The heaviest was at the time of his death, which was 260 lbs.

Elvis became a karate black belt in 1960 and went on to use karate moves in his stage shows.

Preseucoila imallshookupis is a species of gall wasp derived from the Elvis Presley song ‘All Shook Up’.