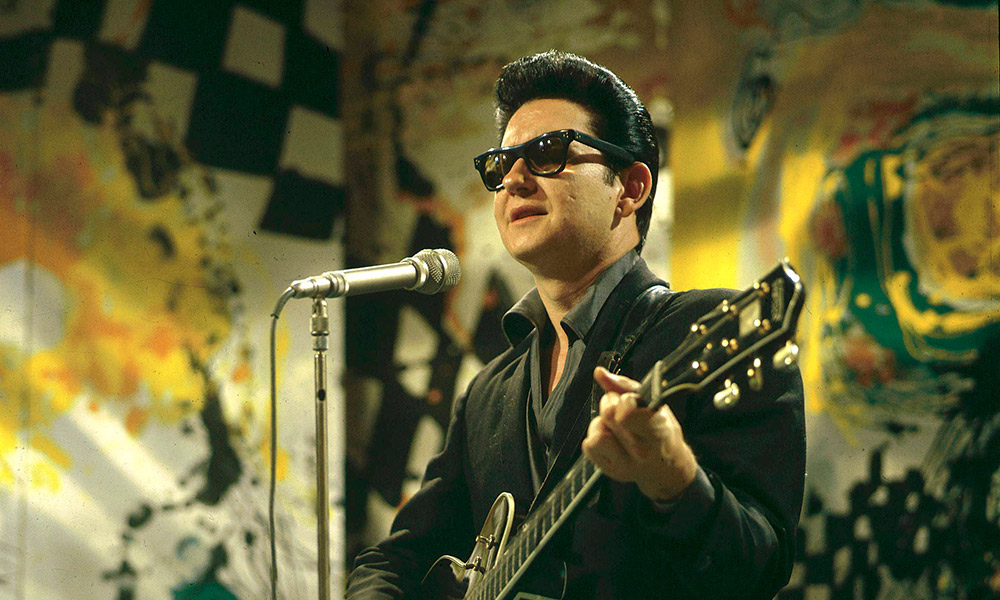 Roy Orbison had his first UK No.1 single in 1960, with “Only The Lonely” which was the first of 33 UK hits. The song was turned down by The Everly Brothers and Elvis Presley so Orbison decided to record it himself.

Roy had teamed up with songwriter Joe Melson who had recently quit his band The Cavaliers. The pair went on to write a string of hits for Monument Records including: “Running Scared,” “Crying,” “Blue Bayou,” and “Only The Lonely,” which became Orbison’s first major hit.

I find it funny to think that various budding English rock musicians were in awe of Orbison, and before they became famous would buy his singles, listening, learning and attempting to copy his singing and writing skills. I am, of course, talking about The Beatles, who at this time were playing the endless sets in Liverpool and Hamburg, Germany, but would later meet their hero, tour with him and Harrison would end up working alongside Roy in the Traveling Wilburys where Roy was known as ‘Lefty Wilbury’ and Harrison ‘Nelson Wilbury’.

Roy Orbison was born in Vernon, Texas, the middle son of Orbie Lee Orbison, an oil well driller and car mechanic. On his sixth birthday, Orbison’s father gave him a guitar. He became a fan of Hank Williams, Jimmie Rodgers and country singer, guitarist Lefty Frizzell (who Roy named himself after in the Wilburys).

In high school, Orbison and some friends formed The Wink Westerners (what a brilliant name), a band that played country standards and Glenn Miller songs. When they were offered $400 to play at a dance, Orbison realised that he could make a living in music.

Later, after hearing about a new rising star by the name of Elvis Presley, Orbison drove 355 miles to Dallas to see the on-stage antics of Presley. Orbison also got to meet Johnny Cash when he toured in 1955, playing on the same local radio show as Roy, who suggested that Orbison approach Sam Phillips at Sun Records. Roy Orbison and the Teen Kings signed to Sun in 1956, and their first release “Ooby Dooby” became a chart hit, but the follow-up singles failed.

Then in 1958, Roy’s luck changed. He was offered a spot on an Everly Brothers show in Hammond, Indiana. It turned out The Everlys needed a song for their new single and asked Roy if he had anything. He sang his new composition “Claudette” and they asked him to write the words down. So he did, on the top of a shoebox. The Everlys’ “Claudette” was released in late March 1958 as the B-side of “All I Have To Do Is Dream.”

Now signed to Fred Foster’s Monument label, Roy was up and running as a solo artist. “Only the Lonely” peaked at No.2 on the Billboard Charts and became No.1 in the UK. “Only the Lonely” became the first song that truly probed the frightening potential of Roy Orbison’s voice, and established his uniqueness.

And then he gave us “Oh Pretty Woman” which became his biggest hit. Few songs have boasted such a memorable guitar riff; the song sold about seven million copies in 1964 alone. Roy was now a true star; he toured with The Beatles in the UK, The Rolling Stones and toured with The Beach Boys in Australia.

Sadly during the mid-’60s, Roy suffered two major personal tragedies: Roy and his wife Claudette shared a love for motorcycles; however, tragedy struck on June 6, 1966, when Orbison and Claudette were riding home from Bristol, Tennessee.

Claudette was struck by a semi-trailer truck and died instantly. Two years later, on Sept. 14, 1968, tragedy struck again when, horrifically, two of his three sons lost their lives in a house fire. Roy Dwayne Orbison was ten years old; his brother, Anthony, was just six. Unable to write songs in the wake of such crushing loss, Orbison nonetheless continued to tour, seeking solace in music and in the support of fans.

The last two years of Orbison’s life were among his most productive. In 1987, he began collaborating with Electric Light Orchestra frontman Jeff Lynne on a new album. At the same time, Lynne was completing production work on George Harrison’s album Cloud Nine, and all three had lunch one day when Orbison accepted an invitation to sing on Harrison’s album. They contacted Bob Dylan, who allowed them to use a recording studio in his home. Along the way, Harrison had to stop by Tom Petty’s house to pick up his guitar; Petty and his band had backed Dylan on his last tour. By that evening, the group had written “Handle with Care,” which led to the concept of recording an entire album. They called themselves the Traveling Wilburys, representing themselves as half-brothers from the same father.

Now that’s the way to form a band!

The Wilburys gave Roy a new lease on life and he took on a heavy workload during the following year. After performances in Germany, the UK and the US Orbison became ill and died of a heart attack. He was just 52 years old, but his spirit seemed far older and wiser than his chronological age. Roy appeared older than he actually was.

Roy wasn’t a rock ‘n’ roller, and he wasn’t a cheesy pop artist, he was ‘The Big O’. He had the biggest voice and sang like nobody else. He wrote some of the best classic pop songs and was known for his motionless performances. Roy didn’t dance or move when he sang. He didn’t have to.

I’ll let this other singer have the last word on Roy:

“In 1975, when I went into the studio to record Born to Run, I wanted to make a record with words like Bob Dylan, that sounded like Phil Spector’s production, but most of all, I wanted to sing like Roy Orbison. Now, everybody knows that nobody sings like Roy Orbison” Bruce Springsteen

Important Dates In The Life Of Roy Orbison: