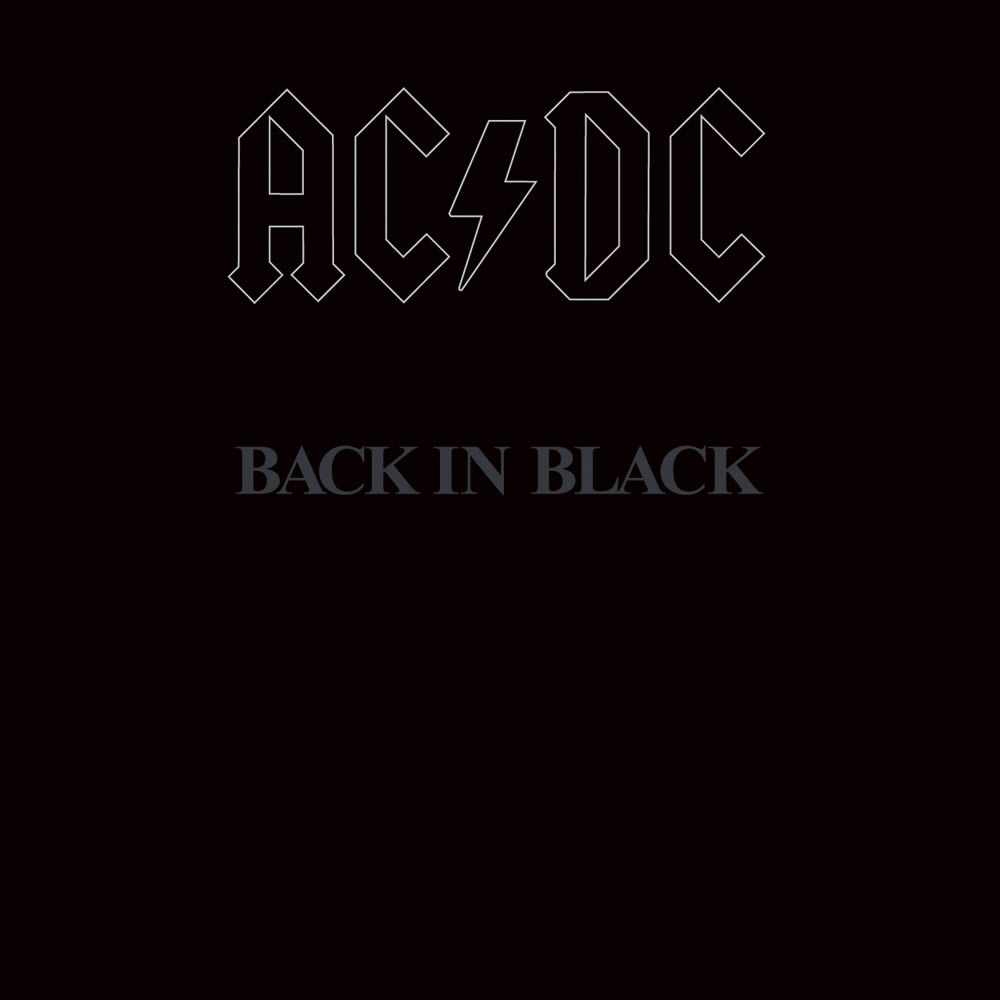 If ever there was an album that created a triumph out of a tragedy, it was Back In Black. The band had slogged their way from town to town in Australia, weathered personnel changes as they honed the lineup into the perfect riffing machine, toured the world bringing their blue-collar rock to an ever-increasing audience, and had finally been within sight of conquering the US with their most recent album Highway To Hell. The album was released in June 1979 and instantly outperformed their four previous releases, staying in the US Billboard chart for some 83 weeks and peaking at number 17, as well as gracing the UK album chart for more than 6 months.

The title track alone justified the appointment of new producer Robert John ‘Mutt’ Lange, who had replaced Hendrix engineer Eddie Kramer before any tracks were laid down. With its combination of hard-hitting guitar riff, devil may care lyrics and mighty chorus, ‘Highway To Hell’ was the quintessential AC/DC song, propelling the album to Gold in the US, (becoming their first million-seller and certified more than 6 times Platinum by 2011) and it seemed as though all the pieces had finally fallen into place for the band.

Until one of the most vital pieces, wild and charismatic frontman Bon Scott, died, in February 1980. Always a committed and social drinker, he had been out for the evening to see Protex and The Trendies at the Music Machine venue in London’s Camden Town, before being driven home by a friend, Alistair Kinnear, who lived in South London. Judged to be too intoxicated to move from the car, Scott was left there overnight, to be discovered dead the following afternoon, officially from inhaled vomit.

Scott, previously the singer with Australian bands The Valentines and Fraternity, had hooked up with the earliest incarnation of AC/DC when he moved from Perth to Adelaide, and was instrumental in getting them their record deal. He was something of an older brother to guitarists Angus and Malcolm Young, who weren’t nearly as wild as their stage show suggested. There were very few limits for Bon Scott (christened Ronald and nicknamed ‘Bon’ as a contraction of ‘Bonnie Scotland’, his birthland), and his lyrics, including those for Highway To Hell, encapsulated the ‘live fast, and to the max’ philosophy that was making AC/DC the guarantee of a good time for rock lovers.

So the loss of Scott was a severe blow to the AC/DC camp, and could have been terminal for the band, if it wasn’t for the natural toughness and resilience of the Young brothers, who, after a suitable period of stasis from shock, decided to at least get back into rehearsing as a form of therapy.

Gradually, as they began to come to terms with their loss, they decided that keeping the band going was the best thing to do to honour Bon’s memory. The songs were written, and had just been awaiting Bon’s lyrics to complete them. So they started the very difficult process of deciding who was a fitting successor and in the process remembered a singer that Bon himself had tipped.

Angus Young later recalled, ‘I remember Bon playing me Little Richard and then telling me the story of when he saw Brian singing’. Scott had apparently reported: ‘There’s this guy up there screaming at the top of his lungs and then the next thing you know he hits the deck. He’s on the floor, rolling around and screaming. I thought it was great, and then to top it off – you couldn’t get a better encore – they came in and wheeled the guy off!’ Ironically it wasn’t actually Brian Johnson’s usual stage act; he was suffering from appendicitis and was in agony, later being rushed to hospital.

After an audition, a disbelieving Johnson – who travelled 200 miles from his native Gateshead to London, only to be sidetracked from performing by playing pool with the road crew, already demonstrating his unpretentious character – was in.

It only remained for Johnson to come up with some suitable lyrics for the band to start laying down some tracks, which they did in the Bahamas, at Compass Point studios. Mutt Lange was again at the helm, and although the Young Brothers made sure the performances were recorded in their trademark style, it can’t be a coincidence that the album, like its predecessor, started to burn up the airwaves on release.

With no disrespect intended to Bon Scott, Back In Black is the essence of AC/DC. Brian Johnson’s more raspy vocal style, honed for years in North of England pop-rock band Geordie, seemed to create a new hard rock measure by which all others were judged – one that was greater than the sum of the parts. Although the parts, individually, are rock-solid, Back In Black is not an album noted for its overdubs; it gives the impression of a recording of a band delivering on the first take on every song, at 100% of their power.

Mutt Lange is, of course, renowned for his painstaking approach to recording, most memorably in his recordings with Def Leppard, which tended to span years. Back In Black, by contrast, was a speedy affair – Bon Scott died in February 1970 and the album was released in August of that year – but its two guitar/bass/drums and vocals sound have never been bettered. At the time, there was much discussion about how to make recordings sound punchy on US car radios, and one of Lange’s continuing strengths has been the creation of a sonic landscape that will make his tracks stand out, which certainly is the case with Back In Black: no special effects, not even a huge reverb-drenched drum sound – just well-recorded guitars with plenty of space, and, as importantly, arrangements which save the kitchen sink for the choruses before dropping right back down to the essentials in the verses.

In fact, it’s remarkable how restrained Lange was in relation to the production, given that he’d started his career as a songwriter, contributing a large portion of the material for early production clients like Supercharge, for instance, while his co-composing credit is all over the Def Leppard recordings. It is probably down to the iron will of the Young brothers that their single-minded vision has kept any producer from becoming more important than the essential AC/DC sound – and rightly so.

And so to the songs. Brian Johnson was to quit writing the lyrics for AC/DC after the Blow Up Your Video album in 1988, but in his way he helped move them on, making the words more ambiguous, albeit only slightly, and rather tongue in cheek, although it’s fairly obvious that to rock bands like AC/DC, rock music is synonymous with sex, drink, cars, gigging, and more sex. And why not?

‘Hell’s Bells’ is an apt opener, dealing with the darker aspects of existence. Stylistically, it showed that AC/DC had returned triumphantly, with more of the same, but somehow bigger. All the trademarks were there – Malcolm Young’s distorted Gretsch with layers of brother Angus’ Gibson SG, deceptively simple but rock solid patterns from long-time member Phil Rudd on drums and only slightly more recent recruit Cliff Williams on bass, (previously of Home, Stars and Bandit), who made a virtue of simplicity. Over the whole thing sat Brian Johnson’s hoarse yelling, fitting right in. There are memorable riffs, there’s plenty of light and shade, interesting chord changes over the solos and of course Angus Young’s anguished meld of Chuck Berry riffage, Eric Clapton’s melodic sense and Paul Kossoff’s tremolo, creating his unique and distinctive blend. In 3 minutes, AC/DC showed that they were back! BACK! B-AC-K! – and with enough force to quell any doubts.

The rest of the tracks maintain the same high standard – no ballads, but no filler either, just slabs of rocking sound, honed from years of gigging, to produce possibly AC/DC’s most consistent album. The first side of the original LP is plenty good enough: after ‘Hell’s Bells’, we get ‘Shoot To Thrill’, ‘What Do You Do For Money Honey’, ‘Given The Dog A Bone’ and ‘Let Me Put My Love Into You’, so anyone at the time looking for a value for money rock album would be happy enough.

But then you turn the album over, and, on the sixth song in, you’re hit with one of the most popular guitar riffs of all time – ‘Back In Black’, introducing a song that doesn’t stop there, but continues into a complex array of riffs, chords, soloing and choruses that takes the album to a new level. And if you still don’t appreciate the Young brothers’ guitar playing, take a look at any of the many clips on YouTube of aspiring guitarists purporting to play the ‘Back In Black’ riffs – they can’t play them like the Youngs. Then it’s straight into ‘You Shook Me All Night Long’, one of the contenders for Top 3 AC/DC tune and as short as it is excitingly effective. And after another two piledrivers in ‘Have A Drink On Me’ and ‘Shake A Leg’, the album wraps up with the call to arms of ‘Rock n Roll Ain’t Noise Pollution’, although if you haven’t been moved by the previous 9 tracks, you’re deaf anyway.

The album put the new incarnation of AC/DC right to the top of the rock tree, where they have remained ever since. It topped the UK chart, followed by a Top 40 entry for ‘You Shook Me All Night Long’, which also became the band’s first US Top 40 single. In November 1980, Back In Black hit number 4 on the Billboard album chart in the US, going on to sell 10 million copies there over the next ten years. And it’s kept on going – Back In Black is now in the Top 3 of worldwide album sellers of all time, having now sold an estimated 49 million copies worldwide. It’s the best-selling hard rock album of all time, and the best-selling album released by an Australian musical act (although Malcolm and Angus Young were born in Scotland, and Brian Johnson and Cliff Williams are British). Forget the sales, though, what’s important is that Back In Black rocks mightily from start to finish.