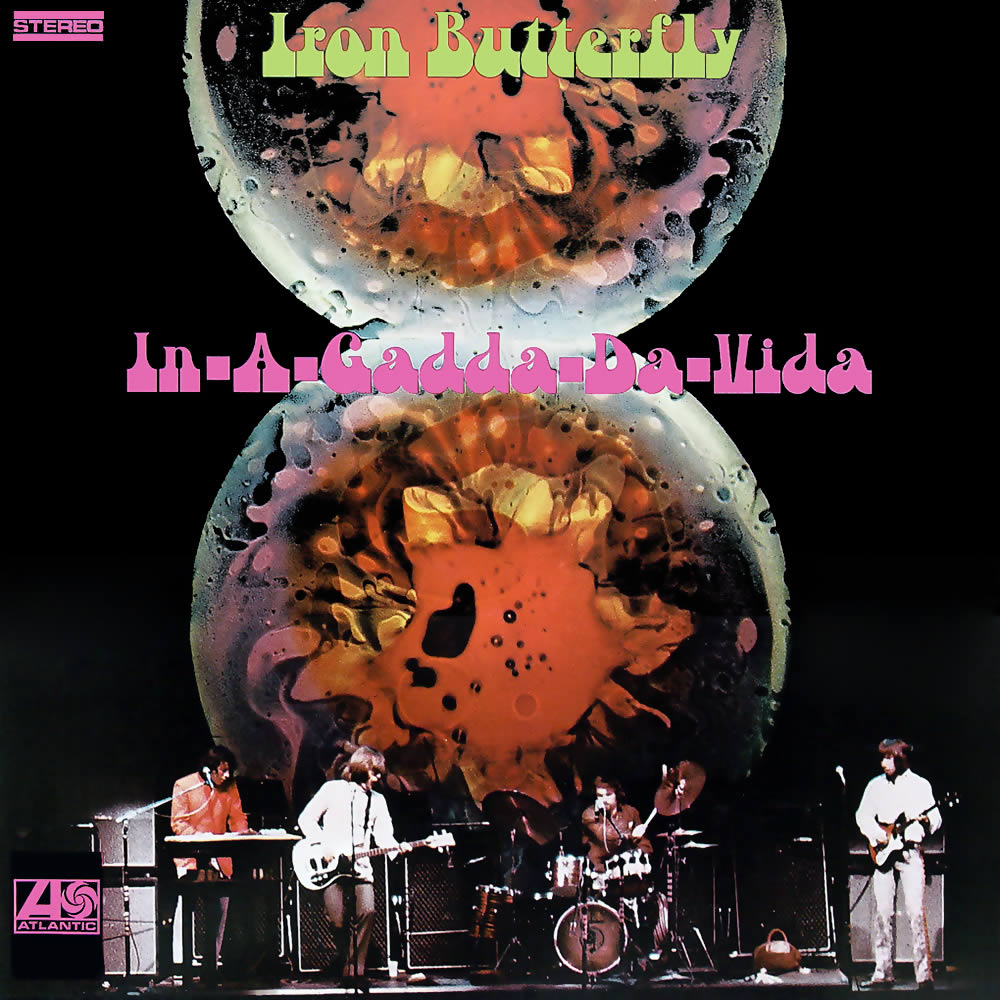 Not a lot was happening in music today in 1968. No one was making headline news. During a live interview, Jane Asher announced she was breaking up with her boyfriend Paul McCartney. Hugh Masekela was at #1 on the U.S. singles chart with “Grazing In The Grass”, and Cream started a four-week run at #1 on the album chart with Wheels On Fire.

A little further down the listings, Iron Butterfly’s second album, In-A-Gadda-Da-Vida, entered the album chart for the first time – with a bullet at… #117.

O.K. not the highest of chart debuts I admit, but some would say this now legendary set of tunes, became the first heavy metal album to hit the charts – and opened the floodgates for many a longhaired, guitar-wielding group to blast us with heavy riffs and overlong guitar solos.

The track was recorded on May 27, 1968, at Ultrasonic Studios in Hempstead, Long Island, New York. The story goes that the recording that is heard on the album was meant to be a soundcheck for engineer Don Casale – while the band waited for the arrival of producer Jim Hilton. However, Casale had rolled the tape, and when the rehearsal was completed it was agreed that the performance was of sufficient quality that another take was not needed.

According to legend, the group were so stoned when they recorded the track that they could neither pronounce the title “In the Garden of Eden” or end the track, so it ended up filling the whole side of the album coming in at a full 17 minutes, of psychedelic rock.

The song’s title was originally “In the Garden of Eden” but at one point in the course of rehearsing and recording, singer Doug Ingle became intoxicated and slurred the words, creating the mondegreen that stuck as the title.
However, another side to the event of the day says that drummer Ron Bushy was listening to the track through headphones, and could not clearly distinguish what Doug Ingle answered when Ron asked him for the title of the song.

An alternate explanation, as given in the liner notes of the 1995 re-release of the “In-A-Gadda-Da-Vida” album, is that Ingle was drunk or high, or both, when he first told Bushy the title, and Bushy wrote it down. Bushy then showed Ingle what he had written, and the slurred title stuck.

Well, either way, it didn’t matter. The album that contained the 17-minute title track went on sell over four million copies in the U.S. alone. Not bad for a stoned jam in the afternoon.

Founding member Doug Ingle became physically and emotionally exhausted after several years of nonstop touring; he resigned from the group in 1971. The organist, vocalist and primary composer for the band went on to form one of the best-named bands ever – Stark Naked and the Car Thieves.

They never troubled the charts, but the original ‘In-A-Gadda-Da-Vida’ album has the distinction of being the first album to go Platinum (shipping more than 1,000,000 copies) in the US, when the Platinum Award was instituted in 1976.