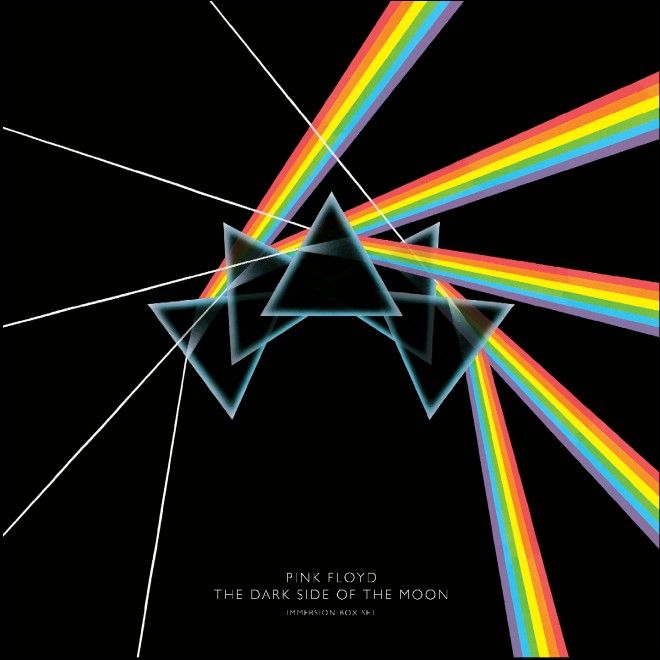 ‘Brain Damage’ is the only track on The Dark Side Of The Moon which mentions the title of the album.

‘The Great gig In The Sky’ became the first Pink Floyd song to be used in a TV commercial; advertising Neurofen painkiller tablets.

The chiming clocks heard on The Dark Side Of The Moon were originally recorded as a quadraphonic test tape by studio engineer Alan Parsons for EMI records.

The Dark Side Of The Moon is a reference to the occult name for the subconscious.

Roger Waters wrote all the lyrics on The Dark Side Of The Moon.

To simplify the design on the sleeve there is no colour purple in the spectrum.

‘Money’ was released as a single with ‘Any Colour You Like’ on the B-side. A two-sided white label promotional version of the single, with mono and stereo mixes, was sent to radio stations. The mono side had the word ‘bullshit’ removed from the song – leaving ‘bull’ in its place – however, the stereo side retained the uncensored version. This was subsequently withdrawn; the replacement was sent to radio stations with a note advising disc jockeys to dispose of the first uncensored copy.

Roger Waters created the early demo tracks for the album at his Islington home in a small studio built in his garden shed.

Pink Floyd devised and recorded unconventional sounds for the album such as an assistant engineer running around the studio’s echo chamber (during ‘On the Run’), and a specially treated bass drum made to simulate a human heartbeat (during ‘Speak to Me’, ‘On the Run’, ‘Time’ and ‘Eclipse’).

Some of the profits from The Dark Side Of The Moon were invested in the film production of Monty Python and the Holy Grail.

Clare Torry who’s vocal can be heared on The Great Gig in the Sky has also performed as a session singer with Kevin Ayers, Olivia Newton-John, Shriekback, The Alan Parsons Project, Culture Club, Meat Loaf and Tangarine Dream. The singer also covered the Dolly Parton single ‘Love Is Like a Butterfly’ for the opening titles of the BBC TV series Butterflies, which ran for four series between 1978 and 1983.

Recording the track ‘Money’ Roger Waters had created effects loops from recordings of various money-related objects, including coins thrown into a food-mixing bowl taken from his wife’s pottery studio.

The Dark Side Of The Moon remained in the US charts for 741 weeks from 1973 to 1988, longer than any other album in history.

Engineer Alan Parsons received a Grammy Award for ‘best engineered album’ for The Dark Side of the Moon in 1973.

‘Us and Them’ was originally a 21 minute track intended for use on the Zabriskie Point soundtrack, but found it’s way onto the album.

English saxophonist Dick Parry who played the parts on ‘Money’, started his career as a friend of David Gilmour and was part of a mid-1960s band also including Gilmour called Joker’s Wild.

If you listen close to the end of ‘Eclipse,’ the album’s closing track, a passage from an orchestral version of The Beatles’ ‘Ticket to Ride’ can be heard; the song was apparently playing in the background at the studio while Abbey Road doorman Gerry O’Driscoll (who delivered the immortal lines, ‘There is no dark side of the moon, really. Matter of fact, it’s all dark. The only thing that makes it look light is the sun.’) was being recorded.

The album was originally released in a gatefold LP sleeve and the band were so confident of the quality of Waters’ lyrics that, for the first time, they printed them on the album’s sleeve.

During recording sessions for the album Roger Waters a supporter of Arsenal Football Club, would often take a break from recording to see his team compete.

In a Rolling Stone readers poll ‘The Great Gig in the Sky’ was selected as the second greatest vocal performance of all time behind ‘Bohemian Rhapsody‘.

The five tracks on each side of the album reflect various stages of human life, beginning and ending with a heartbeat, exploring the nature of the human experience, and (according to Waters) ’empathy’.

Dark Side of the Moon: A Piece for Assorted Lunatics, as it was then known, was performed in the presence of an assembled press on 17 February 1972 – more than a year before its release – at the Rainbow Theatre,London, England and was mainly critically acclaimed. A review in Melody Maker was less enthusiastic: ‘Musically, there were some great ideas, but the sound effects often left me wondering if I was in a bird-cage at London zoo.’

With estimated sales of over 45 million copies, The Dark Side Of The Moon is Pink Floyd’s best seller, and one of the best-selling albums worldwide.