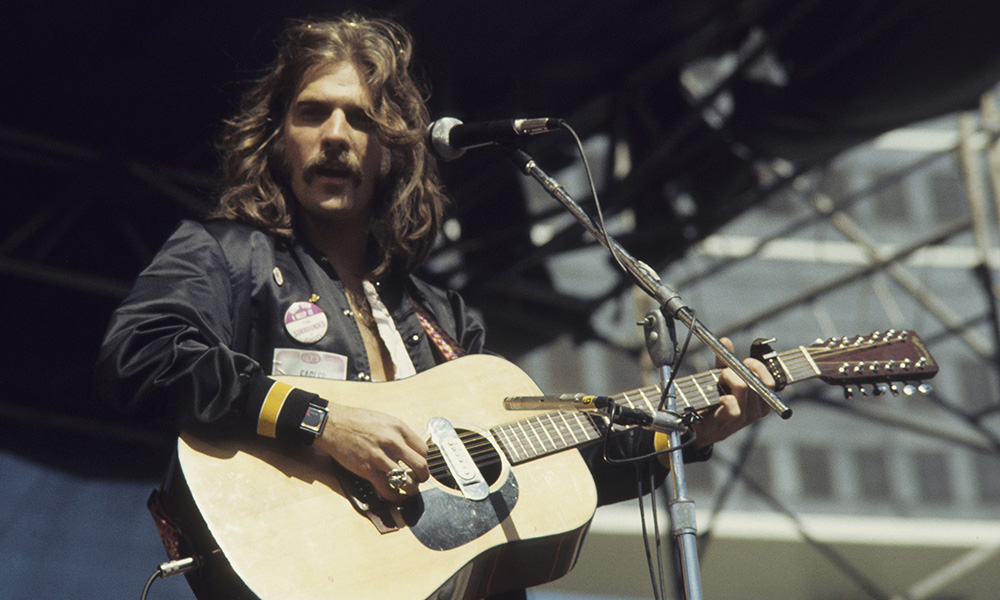 Singer, songwriter Glenn Frey died on 18 Jan 2016 at the age of 67 in New York City from complications arising from rheumatoid arthritis, colitis and pneumonia. Frey co-founded the Eagles with Don Henley, Bernie Leadon and Randy Meisner. After the breakup of the Eagles in 1980, Frey embarked on a successful solo career and went on to score the Top 40 hits “The One You Love”, “Smuggler’s Blues”, “The Heat Is On”, and “You Belong to the City”.

The Eagles formed in Los Angeles in 1971, drummer Don Henley had migrated west from Texas with his band, Shiloh, (and was living at the home of fellow Texan Kenny Rogers); guitarist Glenn Frey was a rocker from Detroit who headed to Los Angeles, where he befriended fellow musicians Jackson Browne and John David Souther. Bernie Leadon had a bluegrass background (The Scottsville Squirrel Barkers, Dillard and Clark), and later the Flying Burrito Brothers with ex-Byrd, Gram Parsons. Bassist and high-harmony singer Randy Meisner had worked with Rick Nelson, James Taylor and Poco.

After working together on Linda Ronstadt’s on her eponymous album they went off on their own, honing the repertoire of songs that would appear on their debut album, which was recorded in England in 1972 with producer Glyn Johns.

Bernie Leadon first suggested the name of the band during a peyote and tequila-influenced group outing in the Mojave Desert, when he recalled reading about the Hopis’ reverence for the eagle.

The first single and lead track, “Take It Easy”, was a song written by Frey with his then-neighbour, Jackson Browne. Browne had written the majority of the song, up until the line “I’m standing on a corner in Winslow, Arizona”, where he became stuck. Frey added the next line “It’s a girl, my Lord, in a flatbed Ford” and Browne carried on to finish the song. When released the song reached number 12 on the Billboard Hot 100 and was the start of a succession of hit singles; “Witchy Woman”, “Peaceful Easy Feeling”, “Best of My Love”, “One of These Nights”, “Lyin’ Eyes” and the bands signature tune “Hotel California”. 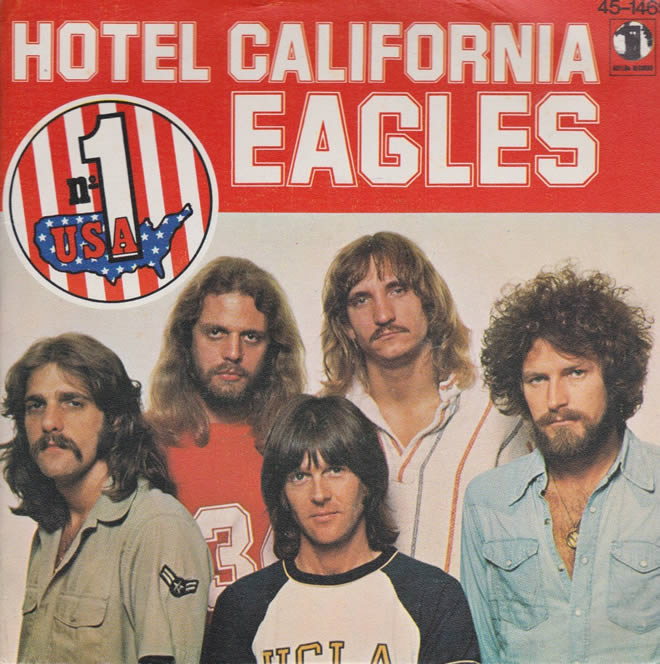 They released four consecutive Number One albums between 1975 and 1979: One of These Nights, Their Greatest Hits 1971-1975, Hotel California and The Long Run. Collectively, those four albums topped Billboard’s album chart for 27 weeks.

Former James Gang leader, Joe Walsh joined the Eagles in 1975 as the group’s keyboardist and guitarist following the departure of their founding member Bernie Leadon, with Hotel California being his first album with the band. After leaving The James Gang, Walsh had seen success as a solo artist with his debut album The Smoker You Drink, the Player You Get and solo hits included “Rocky Mountain Way”, and “Life’s Been Good”.

Timothy B. Schmit joined the Eagles after the Hotel California tour, replacing Randy Meisner on bass/vocals after Meisner quit. As well as being a member of Poco, Schmit was an in-demand session player working with Steely Dan on Pretzel Logic, The Royal Scam and Aja. Schmit also sang backing vocals on “Never Let Her Slip Away”, a top 5 UK hit for Andrew Gold in 1978.

By 1980, the Eagles were the biggest band in America, but their success took a horrible toll on the group. Don Henley and Glenn Frey were intense and driven men, and original members Bernie Leadon and Randy Meisner had already quit because the atmosphere had become toxic. Joe Walsh was often too drunk and stoned to complain about his lack of control by this point. The band broke up in 1980, following a difficult tour and personal tensions that arose during the recording of The Long Run. 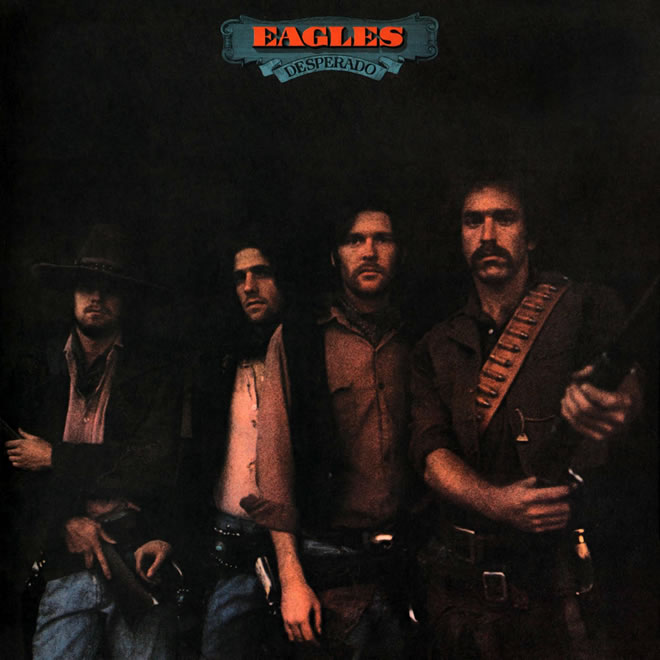 Things came to a head on July 31, 1980, in Long Beach, California, when tempers boiled over into what has been described as the “Long Night at Wrong Beach”. The animosity between Felder and Frey boiled over. Frey and Felder spent the entire show telling each other about the beating each planned to administer backstage. “Only three more songs until I kick your ass, pal”, Frey recalls Felder telling him near the end of the band’s set. Felder recalls Frey telling him during “Best of My Love”, “I’m gonna kick your ass when we get off the stage.”

During the 80’s various members (particularly Don Henley, Glenn Frey and Joe Walsh) launched or resumed successful solo careers. Walsh released a successful album in 1981, There Goes the Neighborhood and Henley achieved arguably the greatest commercial solo success of any former Eagle. In 1981, he sang a duet with Stevie Nicks, “Leather and Lace.” In 1982, he released I Can’t Stand Still, featuring the hit “Dirty Laundry.” His next release, Building the Perfect Beast (1984), features the classic “The Boys of Summer”. Henley’s next album, The End of the Innocence (1989), was also a major success and includes “The End of the Innocence,” “The Last Worthless Evening” and “The Heart of the Matter.”

Meanwhile, the Eagles’ on-going influence inspired the renegade “new country” movement. When 13 of country music’s hottest acts recorded the tribute album Common Thread: The Songs of the Eagles in 1993, its triple-platinum success helped trigger an Eagles reunion a year later.

Country star Travis Tritt insisted on having the Long Run-era Eagles in his video for “Take It Easy” and they agreed. Following years of public speculation, the band formally reunited the following year with Frey, Henley, Walsh, Felder, and Schmit.

When released in 1994, the live album Hell Freezes Over (named for Henley’s recurring statement that the group would get back together “when hell freezes over”), debuted at number 1 on the Billboard album chart. The group’s first best-of collection, Their Greatest Hits 1971-1975, is among the best-selling albums of all time, having sold more than 26 million copies.

In February 2013 the Eagles released a career spanning documentary called History of the Eagles and kicked off the supporting tour. Don Henley said that the tour, which would continue until 2015, “could very well be our last…”

Important Dates In The Life Of Glenn Frey: