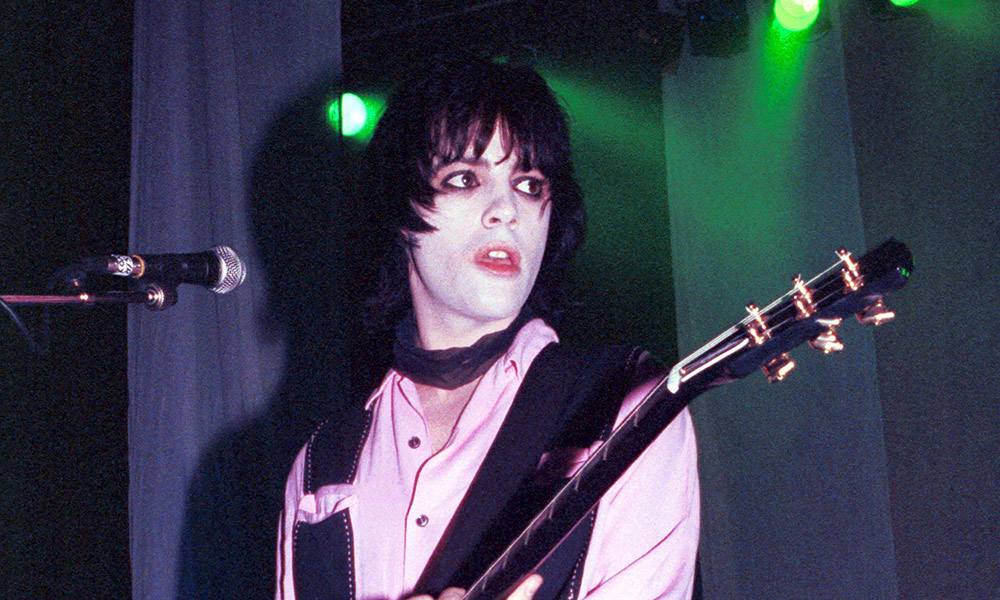 On 1st February 1995, Richey Edwards, guitarist with the Manic Street Preachers, vanished, leaving no clues to his whereabouts. He left the Embassy Hotel in London at 7am, leaving behind his packed suitcase. His car was found on the Severn Bridge outside Bristol, England 16 days later. Edwards has never been found, despite constant searching, and in November 2008 he was declared officially dead.

Edwards (often referred to as ‘James’ during his years with the Manics) grew up in Blackwood, Caerphilly in Wales, where he attended Oakdale Comprehensive School. From 1986 to 1989, he attended the University of Wales in Swansea and graduated with a 2:1 degree in political history. Edwards was initially a driver and roadie for the Welsh group but he soon became accepted as the band’s main spokesman and fourth member.

On 15 May 1991, after a gig at the Norwich Arts Centre in England, Edwards made headlines following an argument with NME journalist Steve Lamacq, who had questioned the Manics’ authenticity and values. He questioned Edwards’ seriousness and commitment towards his art, and Edwards responded by carving the words “4 Real” into his forearm with a razor blade. The injury required 18 stitches. It later transpired that Ritch had a history of self-harming, mainly through stubbing cigarettes on his body and occasionally cutting himself.

Edwards also suffered severe bouts of depression in his adult life and had been open about it in interviews. “If you’re hopelessly depressed like I was, then dressing up is just the ultimate escape. When I was young I just wanted to be noticed. Nothing could excite me except attention so I’d dress up as much as I could.” After the release of the band’s third album The Holy Bible, he checked himself into the Priory psychiatric hospital, forcing the band to appear as a three-piece at two major UK festivals, the Reading Festival and T in the Park in Scotland.

Edwards’ final live appearance with the band was at the London Astoria, on 21 December 1994. The concert ended with the band infamously smashing their equipment prompted by Edwards’ destruction of his guitar towards the end of set-closer “You Love Us.”

On 1 February 1995, James and Manics singer James Dean Bradfield were due to fly to the US on a promotional tour. As the mystery unfolded, events running up to this day were noted: In the two weeks before his disappearance, Edwards withdrew £200 a day from his bank account, which totalled £2800 by the day of the scheduled flight.

He checked out of the Embassy Hotel in Bayswater Road, London at seven in the morning, and then drove to his apartment in Cardiff, Wales. In the two weeks that followed, he was apparently spotted in a passport office and a bus station, both in Newport, Wales. On February 7, a taxi driver from Newport supposedly picked up Edwards from the King’s Hotel and drove him around the valleys, including Blackwood (Edwards’ home as a child). The passenger got off at the Severn View service station.

On February 14, Edwards’ Vauxhall Cavalier received a parking ticket at the Severn View service station and on February 17, the vehicle was reported as abandoned. Police discovered the battery to be flat, with evidence that the car had been lived in. Due to the service station’s proximity to the Severn Bridge (which has been a renowned suicide location in the past, sadly), it is widely believed that he took his own life by jumping from the bridge.

Finally, in November 2008 Richey’s parents were granted a court order for him to be declared presumed dead, despite alleged sightings all over the world many believed to be Edwards — whose car was found near the Severn Bridge, where he was thought to have taken his own life at the age of 27.

Important Dates In The Life Of The Manic Street Preachers: