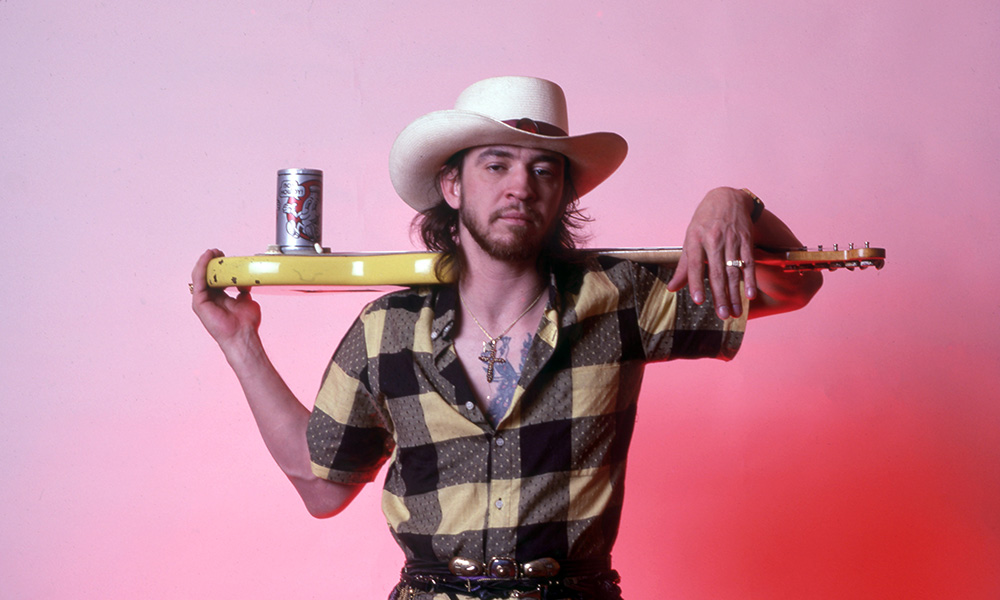 Before his untimely death in 1990, guitarist Stevie Ray Vaughan had become the leading figure in the blues-rock-revival he spearheaded in the mid-’80s. Vaughan drew equally from bluesmen like Albert King, Buddy Guy and Albert Collins as well as rock guitarists like Jimi Hendrix and Lonnie Mack, whose 1985 comeback, Strike Like Lightning, Vaughan would co-produce. In spite of a short-lived mainstream career spanning just seven years, he is widely considered one of the most influential electric guitarists in the history of blues music.

Born and raised in Dallas, Vaughan began playing guitar when he was just 7 years old, inspired by older brother Jimmie, (who later helped form the Fabulous Thunderbirds). By 12 he was playing in garage bands, and within a few years joined semi-professional bands that occasionally landed gigs in local nightclubs. At 17 he dropped out of high school to concentrate on playing music full time. By 1970 Stevie was playing in a nine-piece horn band and then formed his first blues band, Blackbird, a year later. Blackbird moved to Austin and after a few more stints in various bands, Vaughan joined Paul Ray and the Cobras in 1975, (who won Austin’s Band of the Year in 1976).

Stevie then formed Triple Threat in 1977 which also featured bassist W.C. Clark and vocalist Lou Ann Barton. Barton left the band in 1979 and the group became Double Trouble, the name inspired by the Otis Rush song. Double Trouble featured Jack Newhouse on bass, Chris Layton on drums and Vaughan became the band’s lead singer. In 1981 Tommy Shannon (a bassist who had played with Johnny Winter in the late ’60s joined on bass and the blues-based power trio was set.

By 1982 the band’s reputation was spreading and reached the Rolling Stones, who hired Double Trouble to perform at a private party in New York. That same year, veteran producer Jerry Wexler arranged for Vaughan’s band to play the Montreux Jazz Festival, the first time an unsigned group had done so. David Bowie happened to see their performance and invited Vaughan to play on his next album. Vaughan’s gritty guitar work became one of the unexpected highlights of Bowie’s No.1 hit ‘Let’s Dance’.

Inspired musically by American and British blues-rock, he favored clean amplifiers with high volume and contributed to the popularity of vintage musical equipment. He often combined several different amplifiers together and used minimal effects pedals.

Vaughan received several music awards during his lifetime and posthumously. In 1983, readers of Guitar Player voted him as Best New Talent and Best Electric Blues Guitar Player. In 1984, the Blues Foundation named him Entertainer of the Year and Blues Instrumentalist of the Year, and in 1987, Performance Magazine honored him with Rhythm and Blues Act of the Year. Earning six Grammy Awards and ten Austin Music Awards, he was inducted into the Blues Hall of Fame in 2000, and the Musicians Hall of Fame in 2014. Rolling Stone ranked Vaughan as the twelfth greatest guitarist of all time.

Before the last song of the last show of a two-night stand at Alpine Valley Music Theatre, guitar legend Eric Clapton stepped up to the microphone. “I’d like to bring out to join me, in truth, the best guitar players in the entire world: Buddy Guy, Stevie Ray Vaughan, Robert Cray… Jimmie Vaughan.” The band played an extended jam of the classic “Sweet Home Chicago,” with 40,000 people soaking up blistering guitar licks as the performers traded vocals.

After the show, four helicopters were on site to take people to Chicago. According to interviews in Hopkins’ book, Vaughan took the last remaining seat, eager to get to his hotel so he could call his girlfriend.

About 6:30 a.m. Aug. 27, the wreckage of the Bell JetRanger was found about three-fourths of the way up the northeast side of the ski hill, a half-mile from the lodge, with the debris scattered across 150 feet. The helicopter had lifted only about 100 feet off the ground and traveled about 3,000 feet before the crash.

Pilot Jeff Brown was experienced, with more than 5,000 hours of flight time, including 4,327 in a helicopter. But the National Transportation Safety Board report that followed in 1992 indicated the pilot didn’t gain altitude quickly enough to clear the 150-foot ski hill.

After the crash, Vaughan’s music quickly sold out in local record stores, according to the Sentinel, and two subsequent posthumous albums — “Family Style” with his older brother Jimmie in 1990, and studio outtakes collection “The Sky is Falling” in 1991 — debuted in the top 10 on the Billboard charts.