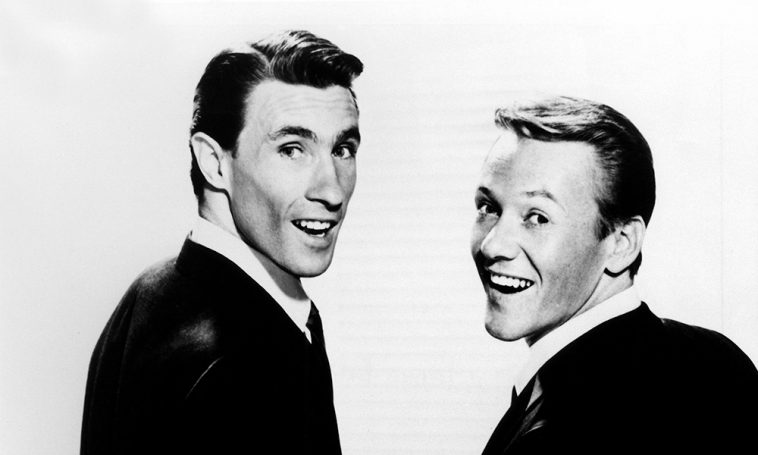 On Nov 3rd 1990, 25 years after their version was recorded, The Righteous Brothers went to No.1 on the UK singles chart with “Unchained Melody”. The track had been featured in the Patrick Swayze film Ghost. Written by Alex North and Hy Zaret, “Unchained Melody” is one of the most recorded songs of the 20th century, with over 500 versions in hundreds of different languages.

One of the most romantic and durable modern songs to emerge from the world of film, “Unchained Melody” had its roots in an obscure movie called Unchained. The picture was the brainchild of one man, Hal Bartlett who wrote, produced, and directed this movie about life in the California Institute of Men, an “honor farm” state prison at Chino.

For the film, the song was sung by Todd Duncan. The idea behind the song was to portray the feelings of the movie character who was imprisoned and was constantly thinking about his lover whom he sorely missed.

“Hang on a minute,” I hear you cry, “who is Todd Duncan?” I didn’t know either but after a quick dive into the depths of the interweb, I’ve discovered Duncan was a very talented young man, and George Gershwin’s personal choice as the first performer of the role of Porgy in Porgy and Bess in 1935, going on to play the role more than 1,800 times. In 1945, he became the first African American to sing with a major opera company, and the first black person to sing in an opera with an otherwise white cast when he performed the role of Tonio in Leoncavallo’s Pagliacci with the New York City Opera.

Back to the song and its origins. Alex North, who composed the music, wrote the first jazz-based film score (A Streetcar Named Desire). North is one of only two film composers to receive the Lifetime Achievement Academy Award, the other being Ennio Morricone. Lyricist Hy Zaret also wrote the popular hit novelty song “One Meatball,” based on a song popular among Harvard undergraduates.

Popular music and the charts in the mid-’50s were very different from today’s chart-toppers. Artists and record companies would spot a good song and record their own versions; no fewer than three versions of the song, by Les Baxter, Al Hibbler, and Roy Hamilton, all hit the Top Ten, with Hibbler’s version ranking as the best known for the next ten years. The song was also recorded successfully by Jimmy Young in the UK and all-round entertainer Liberace.

The song was revived briefly in 1963 when Vito and the Salutations recorded a version that peaked at number 66. This was the first “fast” version of the song.

The Righteous Brothers’ version was produced by Phil Spector in 1965, and was credited to The Righteous Brothers, but performed as a solo by Bobby Hatfield, who later recorded versions credited solely to him. This version climbed to No. 4 on the charts. (Hatfield died at the age of 63 in 2003; he was found dead in a hotel room in Michigan 30 minutes before he was due on stage.)

When Jerry Zucker was filming the movie Ghost in 1990, he used their version for the hot and heavy lovemaking scene between the movie’s co-stars, Patrick Swayze and Demi Moore. Thanks to the composing stylings of Maurice Jarre, an instrumental version of “Unchained Melody” was created and played in various important scenes of Ghost.

Bobby Hatfield, one half of the Righteous Brothers died at the Radisson Hotel in downtown Kalamazoo, Michigan on November 5, 2003, found by an employee at the hotel. He apparently died in his sleep, hours before a scheduled Righteous Brothers concert. In January 2004, a toxicology report concluded that an overdose of cocaine had precipitated a fatal heart attack.

Even Simon Cowell has seen a piece of the action. One of the many examples of the song’s popularity is a recording that was never meant to be released. Instead, it was simply to be a performance featuring British actors Jerome Flynn and Robson Green, who starred in the UK military drama Soldier, Soldier. The actors performed the song in a scene during one of the episodes. Even though Flynn and Green thought nothing more of their performance after it was over because they felt their singing skills were not on par with their acting skills, the audience thought otherwise. Soon after their performance, the television station received calls from viewers who wanted to buy the version sung by the two actors.

Simon Cowell, who was working as a tea boy at BMG Records, approached the duo about recording their version. With great reluctance, they agreed and their recording topped the UK charts for seven weeks. (I made the bit up about him being a tea boy). It has often been said by Simon Cowell to be his favorite song.

The song has been nominated for 15 Oscars but was unsuccessful each time.

In 1955, The Goons produced a comic version of the song, sung in an inappropriately upbeat manner.

Just six weeks before his death in 1977, Elvis Presley performed “Unchained Melody” for what would be his last television appearance.

The Smashing Pumpkins released a cover of the song.

During Queen Elizabeth’s 50th Anniversary celebration, fans gathered outside Buckingham Palace and sang “Unchained Melody” – one of her favorite songs.

Paul McCartney the current owner to rights of “Unchained Melody”, makes $$$ every time the song is played.