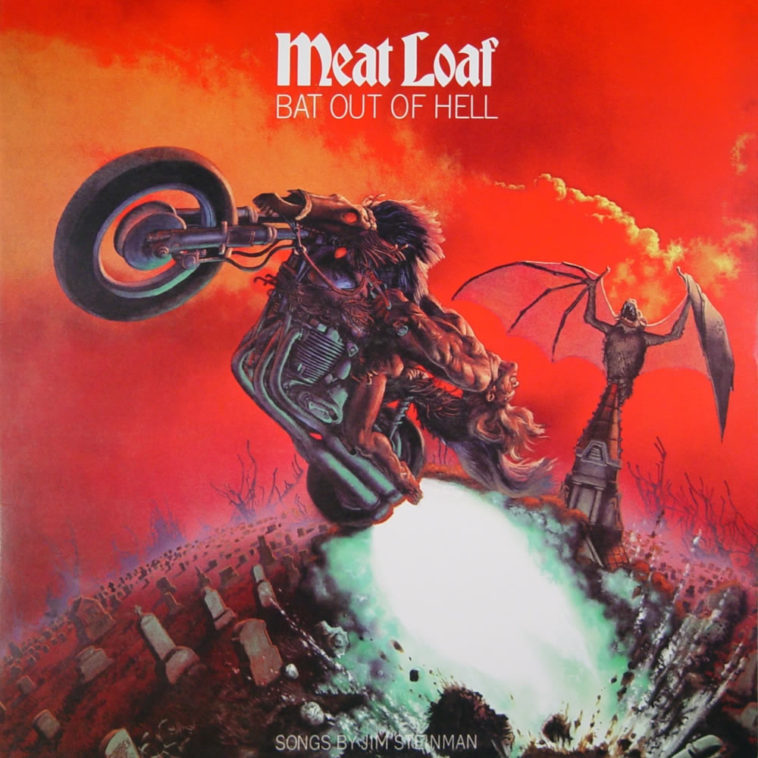 Bat Out Of Hell is an album that’s excessive in every way; big, brash and loud – just like the singer. It’s 1978. Punk is rife, and the forces of classic rock have been scattered to the winds. The last thing anyone needs is an overblown record full of ridiculous gothic imagery and cod-sexual appetites. So Bat Out Of Hell was destined to be one of the year’s more forgettable efforts. Waste of time, waste of money… hang on! We’re actually talking about a record that’s one of the decade’s landmark releases; Bat Out Of Hell is one of the best-selling albums in the history of recorded music, having sold over 43 million copies worldwide.

Meat Loaf was, in reality, a collaboration between the operatic vocals of Meat (born Marvin Lee Aday – September 27, 1947), and the compositional charms of classically trained pianist Jim Steinman. The pair had worked together in a musical during the mid-70s, after which Steinman then plotted his magnum opus, a musical, Neverland, a sci-fi update of Peter Pan, which Steinman wrote for a workshop in 1974, and performed at the Kennedy Center Music Theatre Lab in 1977.

That never happened, but some of the songs were put to good use on Bat Out Of Hell. This was rock opera writ large and taken to excess. If Tommy saw The Who becoming introspective, then Steinman and Aday had no such qualms. This was excess: biker anthems with everything louder than everything else.

The title track sets the scene. A monumental story of love, death and betrayal, it was an epic in every sense. “Paradise By The Dashboard Light”, meantime, was a trailer trash soap opera. “You Took The Words Right Out Of My Mouth (Hot Summer Night)” cast the male as the hapless victim of female guile, being preceded by a spoken word piece (featuring Steinman) that mixed the romanticism of the werewolf with the cynicism of the age. “Two Out Of Three Ain’t Bad” is a ballad that hides a streetwise truth, while “All Revved Up With No Place To Go” (originally called “The Formation of the Pack”), captures the frustration of rampant teenage hormones. “Paradise by the Dashboard Light”, is an epic story about teen romance and sex. A duet between Meat Loaf and Ellen Foley, the couple reminisce about driving to a secluded spot, at which he plans to have sex.

At every turn, the brilliance inherent in Steinman’s lyrics and the simplicity of Phil Spector-inspired post-60s pop is matched by Meat Loaf’s magnificent over the top performance. And this is backed by some of the greatest musicians of the time. The inspired move of the choice of Todd Rundgren to produce the record (no, contrary to popular myth, Steinman didn’t do the job), was matched by Rundgren’s equally inspired decision to hire members of Bruce Springsteen’s E Street Band (Max Weinberg on drums and Roy Bittan on keyboards). Plus we have Edgar Winter on saxophone on three tracks, and Rundgren’s own proto-metal guitar throughout, from buzzsaw backing to searing lead, even evoking motorcycle noises where required.

When the album was ready for release, Steinman had wanted equal billing with Meat Loaf on the album’s title. He wanted it to be called “Jim Steinman presents…” or “Jim and Meat,” but for marketing reasons, the record company wished to make ‘Meat Loaf’ the recognizable name. As a compromise, the words “Songs by Jim Steinman” appear relatively prominently on the cover.

A mega-seller at the time, Bat Out Of Hell continues to enjoy almost iconic status – one of those rare albums that is both a coffee table necessity, but also vital in any Classic Rock-approved collection. Why? Because everything is pushed to the limit – and way beyond. Now, that’s rock ’n’ roll!