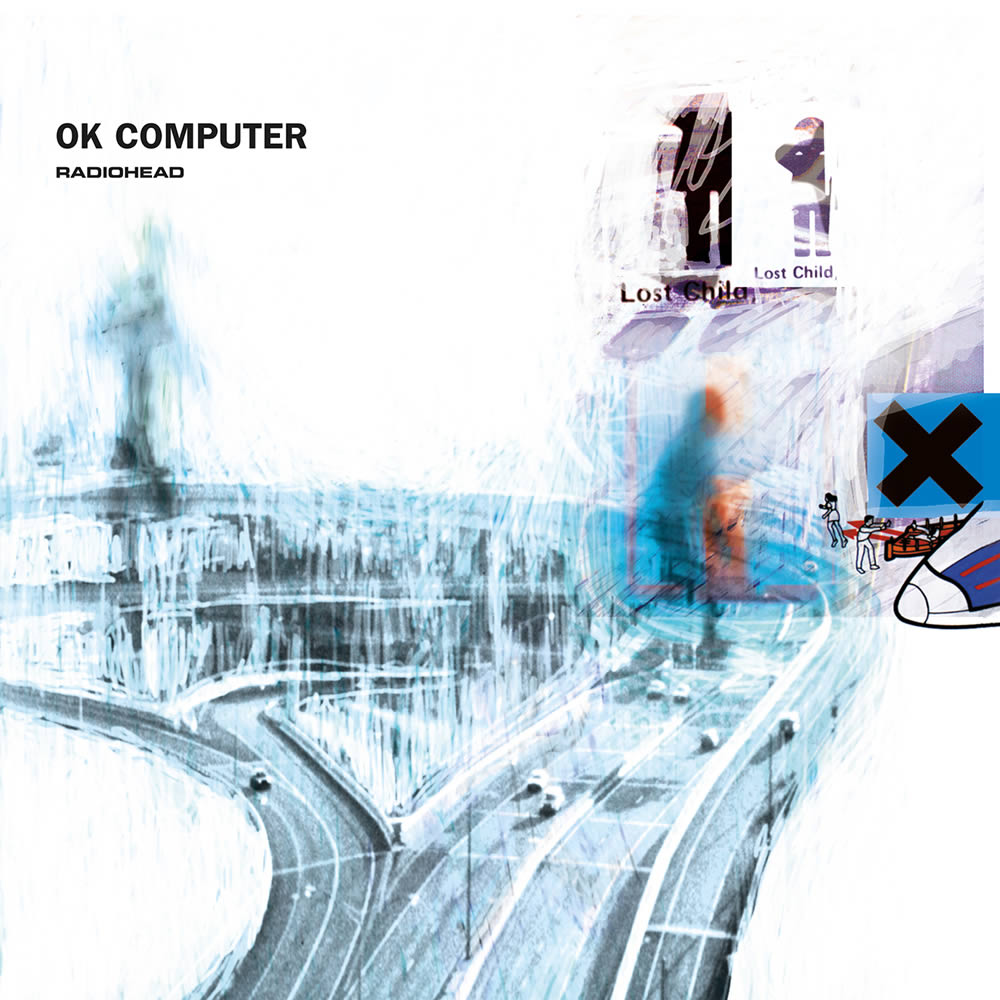 The release of their second studio album, The Bends, in 1995 saw Radiohead cracking the top 5 in the UK chart, playing to sold out crowds in the UK and Japan, but still not making an impression on that ever-important US market. The five lads from Oxford (Thom Yorke, Jonny Greenwood, Colin Greenwood, Phil Selway and Ed O’Brien) made six promotional trips to America, but still The Bends stalled there at number 88.

The pressure on the band was immense and by the time the US tour for The Bends officially began, Yorke had a build-up of fluid in his ears from his regular airplane flying, worrying him that he might be going deaf. On the debut show of the tour in Boston, Yorke lashed out at moshers in the crowd, yelling and hitting one with his guitar. On 29 May, Yorke had a ‘breakdown’ and begged tour manager Tim Greaves to book him a flight back to England.

January 1996 saw a drained Radiohead taking a break. The Bends had been a critical success, and it gave the band the self-confidence to want to produce their third album themselves. Having considered a number of collaborators, including major figures like Scott Litt, the band were encouraged to be their own producers by recording sessions with engineer Nigel Godrich, who had assisted John Leckie with The Bends and had produced several Radiohead B-sides. The group prepared for the recording sessions by buying their own recording equipment, including a plate reverb unit purchased from Jona Lewie, the Stiff recording star from the 1980s who scored the hit ‘You’ll Always Find Me in the Kitchen at Parties’. Radiohead consulted Godrich for advice on what equipment to use, and, although Godrich sought to shift the focus of his production work away from rock music and to electronic dance music, he outgrew his role as advisor and became co-producer of the album.

In early 1996 and with no deadline or pressure from their label EMI, the band started rehearsing and recording tracks for what would become OK Computer in the Canned Applause studio, a converted shed near Didcot, Oxfordshire. Bassist Colin Greenwood said of the experience, ‘We had this mobile studio type of thing going where we could take it all into studios to capture those environments. We recorded about 35% of the album in our rehearsal space. You had to piss around the corner because there were no toilets or no running water. It was in the middle of the countryside. You had to drive to town to find something to eat.’

These early sessions gave Radiohead four songs: ‘Electioneering’, ‘No Surprises’, ‘Subterranean Homesick Alien’ and ‘The Tourist’, but the remoteness and lack of toilet and eating facilities at Canned Applause made the group look for alternative arrangements. Yorke later explained that the starting point for the record was the ‘incredibly dense and terrifying sound’ of Bitches Brew, the influential 1969 avant-garde jazz/fusion album by Miles Davis.

Around this time, the band took a break from recording to embark on a 13-date American tour opening for Alanis Morissette, where they performed early versions of several of their new songs. During the summer 1996 tour one of the new songs, ‘Paranoid Android’, evolved from a fourteen-minute song featuring long organ solos into one closer to the six-minute album version.

During the tour, filmmaker Baz Luhrmann commissioned Radiohead to write a song for his upcoming film William Shakespeare’s Romeo + Juliet. Luhrmann having given the band footage of the final 30 minutes of the film, Thom Yorke stated: ‘When we saw the scene in which Claire Danes holds the Colt 45 against her head, we started working on it immediately.’ Soon afterwards, the band wrote and recorded ‘Exit Music (For A Film)’; the track plays over the film’s end credits but was not included on the soundtrack at the band’s request. Yorke later said that the song helped shape the direction of the rest of OK Computer, and that it ‘was the first performance we’d ever recorded where every note of it made my head spin – something I was proud of, something I could turn up really, really loud and not wince at any moment.’

Back from the US, Radiohead resumed recording sessions in September 1996 at St Catherine’s Court, a historic mansion near Bath, owned by actress Jane Seymour. The isolation from the outside world allowed the band to work at a different pace, with more flexible and spontaneous working hours. The group made much use of the different rooms and atmospheres throughout the house: the vocals on ‘Exit Music (For A Film)’ featured an echo effect achieved by recording on a stone staircase, and Let Down was recorded at 3 AM in a ballroom.

By Christmas 1996, Radiohead had 14 songs from the sessions, and took a break for the festive period, going back to work in January 1997 to add string parts at Abbey Road Studios in London. During the making of OK Computer, the band expanded their instrumentation to include electric piano, Mellotron, cello and other strings, glockenspiel and electronic effects. According to Yorke, the band strived to achieve an ‘atmosphere that’s perhaps a bit shocking when you first hear it, but only as shocking as the atmosphere on The Beach Boys’ Pet Sounds.

OK Computer was the original title for the song Palo Alto, which had been considered for inclusion on the album, and, although the song was abandoned, its first title stuck with the band. According to Jonny Greenwood, ‘It started attaching itself and creating all these weird resonances with what we were trying to do.’

For OK Computer, Radiohead stripped away many of the obvious elements of guitar rock, creating music that is subtle and textured, yet still has the feeling of rock & roll. Thom Yorke’s voice effortlessly shifts from a sweet falsetto to vicious snarls, while many of his vocals were first takes; he felt that if he made other attempts he would ‘start to think about it and it would sound really lame.’

When the band delivered the album, the band’s American label Capitol saw ‘more or less, commercial suicide’. They were reportedly disappointed with the lack of potential marketable singles, especially the absence of anything resembling their initial hit, Creep. In an attempt to secure radio play and reviews, Capitol Records sent 1,000 cassette players to prominent members of the US music industry, each with a copy of the album permanently glued inside. It worked: the album saw the band breaking the US, resulting in a healthy number 21 chart position.

‘Paranoid Android’ was chosen as the first single, despite the lack of a catchy chorus. But much UK radio play helped it reach number 3 in the charts there, Radiohead’s highest single chart position to date. The album followed on 16th June in the UK, where it became the band’s first number 1 album. It stayed in the top 10 for weeks and became the country’s eighth best-selling record of the year, remaining in the album chart for 76 weeks. ‘Karma Police’ and ‘No Surprises’ were also released as singles, both reaching the UK Top 10. The US release was 01 July, and the widespread rock radio airplay for Karma Police helped to ultimately sell more than a million copies there, with a total of 4.5 million worldwide.

OK Computer is filled with moody masterpieces, from the shimmering ‘Subterranean Homesick Alien’ and the sighing ‘Karma Police’ to the gothic crawl of ‘Exit Music (For A Film)’, establishing Radiohead as one of the most inventive and rewarding guitar rock bands of the 1990s.