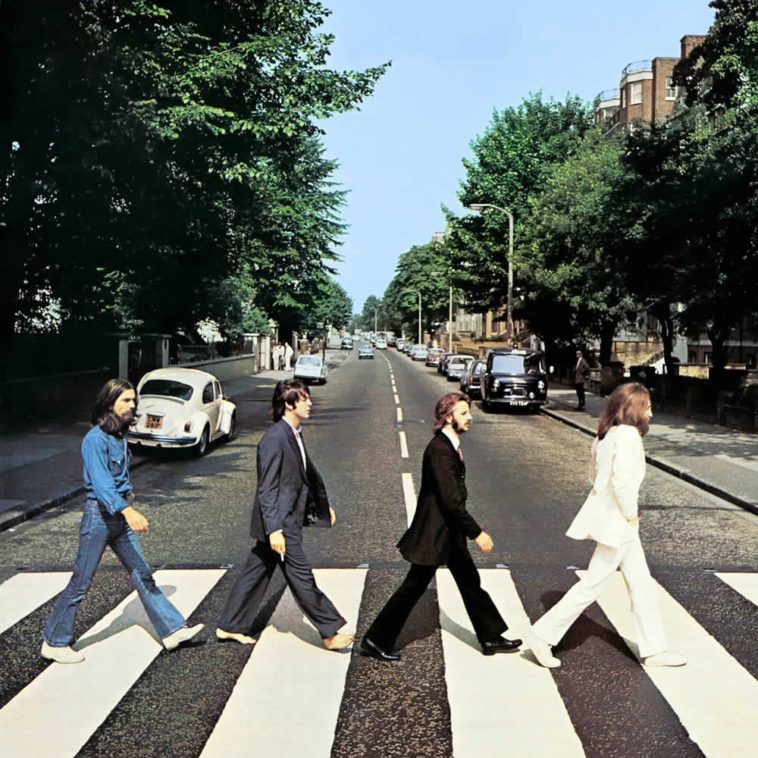 On 26th Sept 1969, The Beatles released Abbey Road in the UK. The final studio recordings from the group featured two George Harrison songs ‘Something’ (Harrison’s first A-side single), and ‘Here Comes The Sun’. In their interviews for The Beatles Anthology, the surviving band members stated that, although none of them ever made the distinction of calling it the “last album”, they all felt at the time this would very likely be the final Beatles product and therefore agreed to set aside their differences and “go out on a high note”.

The photo session for the cover of The Beatles Abbey Road album took place a month earlier on 8th August, on the crossing outside Abbey Road studios. Photographer Iain McMillan, balanced on a step-ladder in the middle of the road took six shots of John, Ringo, Paul, and George walking across the zebra crossing while a policeman held up the traffic. The band then returned to the studio and recorded overdubs on ‘The End’, ‘I Want You (She’s So Heavy)’ and ‘Oh! Darling’.

The man standing on the pavement in the background on The Beatles Abbey Road album sleeve is Paul Cole, an American tourist who was unaware that he was being photographed until he saw the album cover months later.

When released in 1969 the cover of The Beatles Abbey Road album supposedly contained clues adding to the ‘Paul Is Dead’ phenomenon: Paul is barefoot and the car number plate ‘LMW 281F’ supposedly referred to the fact that McCartney would be 28 years old if he was still alive. ‘LMW’ was said to stand for ‘Linda McCartney Weeps.’ And the four Beatles, represent; the priest (John, dressed in white), the Undertaker (Ringo in a black suit), the Corpse (Paul, in a suit but barefoot), and the Gravedigger (George, in jeans and a denim work shirt).

Abbey Road was voted 14th on Rolling Stone magazine’s list of the “500 Greatest Albums of All Time”. In 2009, readers of the magazine also named Abbey Road the greatest Beatles album.

“Something” became George Harrison’s first A-side single. The track was initially given to Joe Cocker but was subsequently recorded for Abbey Road. Frank Sinatra once commented that “Something” was “the greatest love song ever written”.

In their interviews for The Beatles Anthology, the surviving band members stated that, although none of them ever made the distinction of calling it the “last album”, they all felt at the time this would very likely be the final Beatles product and therefore agreed to set aside their differences and “go out on a high note”.

“Octopus’s Garden”, was Ringo’s second (and last) solo composition released on a Beatles album. It was inspired by a trip to Sardinia aboard Peter Sellers’ yacht that occurred when Starr left the band for two weeks with his family during the sessions for The Beatles. While there, he composed the song.

The climax of the album is the 16-minute medley consisting of several short songs, both finished and unfinished, blended into a suite by McCartney and Martin.

The album opener “Come Together” was inspired by a song Lennon originally wrote for Timothy Leary’s campaign for governor of California titled “Let’s Get It Together”.

“Here Comes the Sun” is one of George Harrison’s best-known songs; it was written in Eric Clapton’s garden in Surrey, England.

“Her Majesty”, tacked on the end of the album, was included in a rough mix of the side two medley, appearing between “Mean Mr. Mustard” and “Polythene Pam”. McCartney disliked the way the medley sounded when it included “Her Majesty”, so he had it cut out of the tape. However, second engineer John Kurlander had been instructed never to throw out anything, so after McCartney left, he picked it up off the floor, spliced 14 seconds of red leader tape onto the reel, and then spliced in “Her Majesty” onto the leader tape, resulting in the track coming at the end of side two.

The image of the Beatles on the crossing has become one of the most famous and imitated in recording history. The crossing is a popular destination for Beatles fans and there is a webcam featuring it. In December 2010, the crossing was given grade II listed status for its “cultural and historical importance”; the Abbey Road studios themselves had been given similar status earlier in the year.