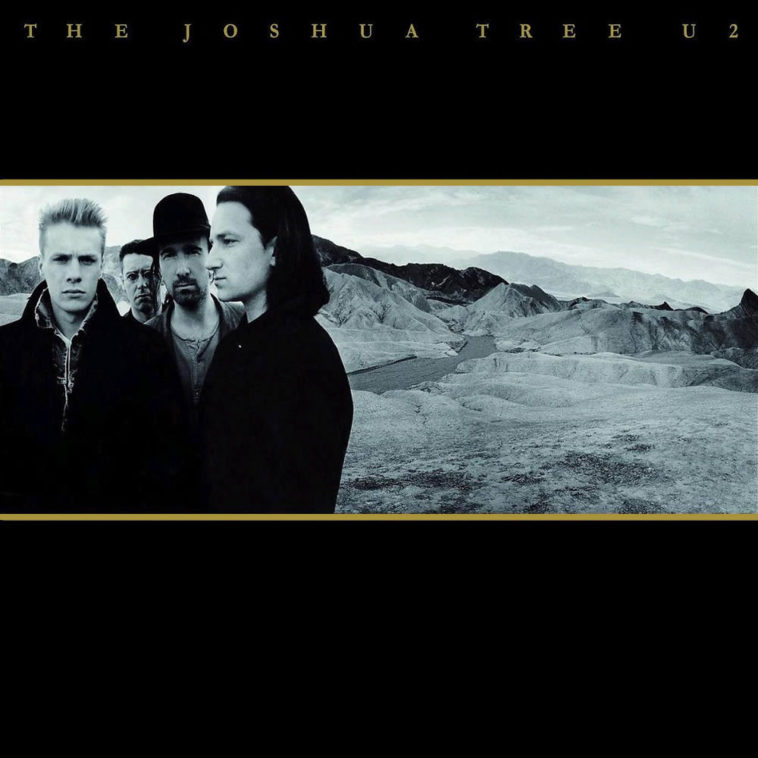 Back in the 1980’s, U2 under-took a gruelling nine-month tour following the release of The Unforgettable Fire, which took in 54 US dates and led to the band’s unforgettable appearance at Live Aid in July 1985. Was it Queen or U2 who stole the show? In the middle of “Bad” Bono jumped off the front of the stage trying to pick out some girls to dance with, and returned with a female fan (who we later discovered was called Melanie Hills).

They didn’t realize it at the time but it was a set that would alert a whole new audience to their music but it was another two years before the band released, The Joshua Tree in 1987, the original working title of which was ‘The Two Americas’.

Inspired by American tour experiences, literature, and politics, U2 chose America as a theme for the record and recording began in January 1986 in comfortable surroundings in Ireland, Throughout the sessions, U2 sought a “cinematic” quality for the record, one that would evoke a sense of location, in particular, the open spaces of America.

They represented this in the sleeve photography depicting them in American desert landscapes, which were designed by Steve Averill, and their regular photographer Anton Corbijn was sent out to search for locations in the US.

In December 1986, the band travelled with Corbijn and Averill on a bus around the Mojave Desert in California for a three-day photo shoot. The group stayed in small hotels and shot in the desert landscape, beginning in Bodie, a ghost town in the Bodie Hills east of the Sierra Nevada mountain range before moving to locations such as Zabriskie Point and other sites in Death Valley which is the lowest, driest, and hottest area in North America.

On the evening after the first day’s shooting, Corbijn told the band about Joshua trees, hardy and twisted plants in the deserts of the American Southwest, and he suggested their use on the sleeve. The following day, Bono declared that the album should be titled ‘The Joshua Tree’.

The Joshua Tree was released on 9 March 1987, the first new release to be made available on the compact disc, vinyl record, and cassette tape formats on the same date. Record stores in Britain and Ireland opened at midnight to accommodate the large amount of fans who had queued outside to buy the album.

“With or Without You” was released as the album’s lead single on 21 March 1987. The song was the group’s most successful single at the time, becoming their first number one hit in the United States.

More hits followed, “I Still Haven’t Found What I’m Looking For”, for which the music video was filmed on Fremont Street in Las Vegas on 12 April 1987 following their Joshua Tree Tour concert in the city, “Where the Streets Have No Name” and “In God’s Country”.

The track “One Tree Hill” was written in memory of Greg Carroll, a Māori man the band first met in Auckland during The Unforgettable Fire Tour in 1984. He became a very close friend with Bono and served as a roadie for the group. Carroll was killed in July 1986 in a motorcycle accident in Dublin. Carroll was the roadie with curly hair seen by millions at Live Aid, who untangled Bono’s microphone cord as he jumped from the stage.

The Joshua Tree is the band’s best-selling album, with 25 million copies sold worldwide and at the 1987 Grammy Awards, won the band ‘Album Of The Year’ and ‘Best Rock Performance’, the first of what has become a record-breaking run of Grammy wins.

In 2007 a re-mastered version of the album was released to mark the 20th anniversary of its original release and in their book, ‘U2byU2’ the band talked in detail about how many of the songs came together. At the 1987 Grammy Awards, U2 won Album Of The Year and Best Rock Performance for The Joshua Tree, their first Grammy Award wins.