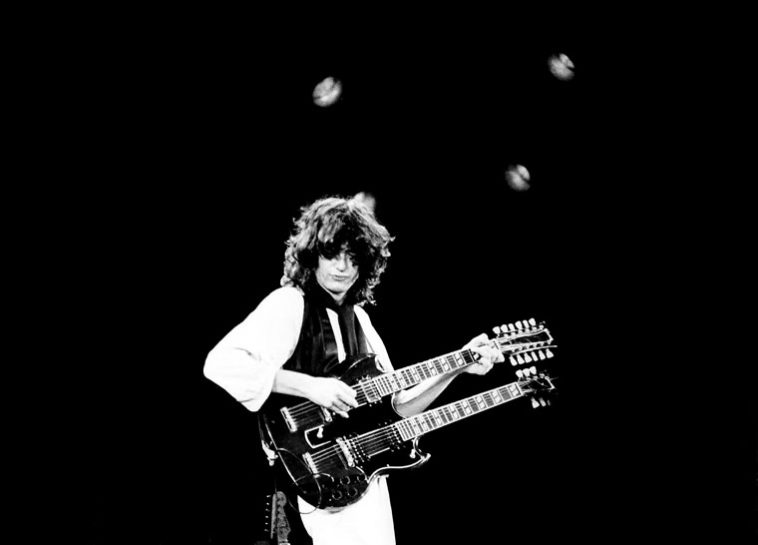 Jimmy Page was born on 9 January, 1944, guitarist and producer, member of the Yardbirds and Led Zeppelin. The band’s fourth album, released in 1971 and featuring the rock classic “Stairway To Heaven,” has sold over 37 million copies.

Page has also worked with The Black Crowes, Roy Harper, The Firm, Coverdale Page, Puff Daddy, and has released solo recordings and soundtracks as well as recording and touring with his old mate Robert Plant.

Jimmy Page is my guitar hero!

I’ve always been a massive Zeppelin fan and was lucky enough to see them live in 1972 when I was in my last year at school. They blew me away. I’d never experienced such a raw, exciting, loud, explosive gig like it; nobody could touch Zeppelin live at that stage. My ears rang for several days afterwards.

Page knew exactly what he was doing when he formed Zeppelin. The young guitarist had not only developed his live performing skills during his time with The Yardbirds, but had also previously become a master of the studio after playing on countless recordings as a much sought-after session guitarist.

In 1966, Keith Moon, John Paul Jones, Jeff Beck, and Jimmy Page recorded Beck’s Bolero. The experience gave Page an idea to form a new supergroup featuring Beck, along with The Who’s John Entwistle on bass and Keith Moon on drums. During this time, Moon suggested the name Lead Zeppelin for the first time, after Entwistle commented that the proceedings would take to the air like a lead balloon. Zeppelin manager Peter Grant later changed it to Led Zeppelin, to avoid a mispronunciation of Leed Zeppelin.

Page went on to join the Yardbirds, at first playing bass before switching to twin lead guitar with his friend Jeff Beck. At this stage The Yardbirds were falling apart; Beck quit, making them a quartet. They recorded one album with Page on lead guitar, Little Games. Though their studio sound was fairly commercial, the band’s live performances were just the opposite, becoming heavier and more experimental. These concerts featured musical aspects that Page would later perfect with Zeppelin.

After the departure of Keith Relf and Jim McCarty in 1968, Page reconfigured the group with a new lineup to fulfil unfinished tour dates in Scandinavia.

The story has been told many times of how the group came together: Page’s first choice vocalist, Terry Reid, recommended the young singer Robert Plant (who had already been in three bands); Plant pushed for his friend John Bonham, who was drumming for artists of the calibre of Tim Rose and had several offers to juggle. Fellow session player and veteran pop arranger/bassist John Paul Jones called up Jimmy Page and the lineup was set. Even so, things might not have jelled, but it was reportedly a magic affair when the foursome first rehearsed together on “The Train Kept A-Rolling”, an old Yardbirds favourite that was to feature in many a future Zeppelin set.

Bonham’s solidity and Jones’ fluidity, coupled with a mutual love of soul music, proved the ideal bedrock for Page’s structured folk and blues influences, combined with a talent for rock song arrangement that ensured the audience’s interest. On top of that came Robert Plant’s unique vocal style, rooted in blues but with incredible power in the upper range, plus a range of lyrical interests that extended beyond the straight pop and blues references of the time.

It’s hard, even with hindsight, to describe the impact that the first Led Zeppelin album had on its release in January 1969. Page and manager Peter Grant did it their way, they changed the rules. Massive US tours, no single releases in the UK, Zeppelin became one of the best-selling acts ever – their 111.5 million certified units in the United States rank them as the second-best-selling band in the US. Each of their nine studio albums reached the top 10 of the album chart in the US, with six reaching the number-one spot.

Led Zeppelin disbanded following drummer John Bonham’s sudden death in 1980. Page, Plant, and Jones didn’t want to continue without the powerhouse that was John Bonham — which in my opinion was a brave move but the correct one.

Jimmy has always kept himself busy, touring with Plant, The Black Crowes, and immersing himself in various Zeppelin-related re-mastering projects.

They say you should never meet your heroes, but I met mine. A couple of years back I was at the BBC in London and Mr Page was also in the building recoding a radio show. I’d noticed a small crowd gathering outside the building, which was made up of fans and photographers. Walking to the BBC canteen for lunch I mentioned to a colleague how great it would be to bump into Jimmy, as I was such a fan. It turned out my colleague had worked with the guitarist in the past, so said jokingly “If we bump into him, I’ll introduce you”.

A few minutes later we stood waiting for a lift. The doors opened and there was Jimmy, who immediately greeted my friend by shaking his hand. My friend kept his word and said to Jimmy, “Meet a good friend of mine, Neil Cossar, who is a huge fan of yours.” Jimmy held out his right hand — the hand that had played “Rock and Roll” a thousand times, the hand that came up with the riff to “Whole Lotta Love”, the hand that had composed “Stairway To Heaven”.

“Lovely to meet you,” said Jimmy, squeezing my hand in a firm but friendly handshake. I’m not sure what I said. I think I mumbled, “Great to meet you”. We all had a quick chat and off he went.

Over the next few days, I told anyone who would listen to my tale. I didn’t wash my hands for two days…