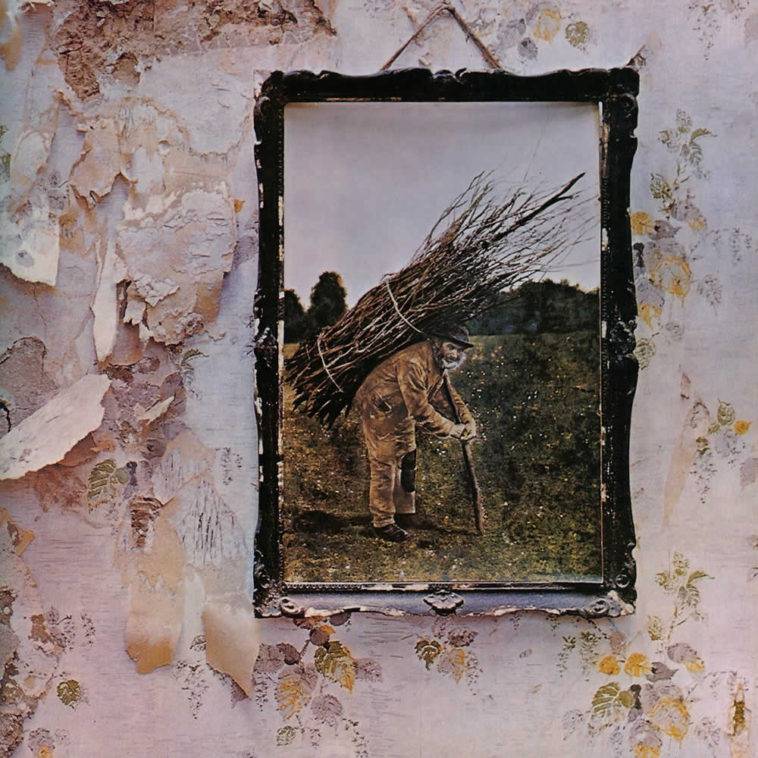 On 8th Nov 1971, Led Zeppelin released their fourth album. With no title printed on the album, and generally referred to as Four Symbols, The Fourth Album or Led Zeppelin IV, it has gone on to sell over 37 million copies worldwide. The 19th-century rustic oil painting on the front of the album was purchased by Robert Plant from an antique shop in Reading, Berkshire, England. The 20th-century urban tower block on the back of the full gatefold LP cover is Butterfield Court in Eves Hill, Dudley, England.

No title is printed on the album, because the band deliberately wanted it to be untitled, going as far as identifying themselves with four specially-chosen symbols. Even so, it is generally referred to as Led Zeppelin IV, following the naming standard used by the band’s first three studio albums, the symbols themselves having no verbal or written equivalent.

In October 1970 Jimmy Page and Robert Plant returned to Bron-Yr-Aur, the Welsh cottage where they had composed much of Led Zeppelin III and developed new song ideas. ‘Led Zeppelin III’ had been released in early October 1970, but only two months later they started work on its follow-up at Island Studios, Notting Hill, London.

Then in January 1971 Zeppelin decided to get out of town, back to the space where they could all contribute with the clock ticking a bit more slowly. For the previous album, they had begun working at Headley Grange in Headley, Hampshire, UK. An 18th-century former workhouse, the large house was popular with rock bands such as Humble Pie and Fleetwood Mac for rehearsal and routining tracks prior to recording, mainly because it was far enough from neighbours to avoid noise complaints. Zeppelin repeated the technique of recording there with the Rolling Stones mobile studio, continuing their working relationship with engineer Andy Johns.

Ian ‘Stu’ Stewart was a founder member of the Rolling Stones and managed their mobile studio, so he was on hand to help out, most notably on piano for ‘Rock And Roll’, the Headley Grange sessions yielding 6 out of the album’s 8 tracks. Perhaps surprisingly, the most classic and evocative track ‘Stairway To Heaven’, wasn’t recorded at Headley Grange, although the lyrics were conceived there. Jimmy Page had worked on the structure of the song with John Paul Jones, and based on that Robert Plant came up with most of the lyrics in a burst of inspiration, apparently on the spur of the moment, around the fire at Headley Grange. The band then recorded the final version at Island after they returned to London.

One track that certainly was recorded at Headley Grange was the much-sampled ‘When The Levee Breaks’, John Bonham’s overpowering drum sound captured with just two microphones in the hallway of the house. The album was first mixed at Sunset Sound, Los Angeles but only one of those mixes (‘When The Levee Breaks’) made it to the final version, the rest being remixed at London’s Olympic Studios.

As with the intention for the album to remain untitled, no lettering was included anywhere on the original LP sleeve, not even the catalogue number. This was an intentional move on the part of Zeppelin to be judged solely on their music, and, since the album continues to be hugely successful and influential, they probably were.

The 19th-century rustic oil painting on the front of the album was purchased by Robert Plant from an antique shop in Reading in Berkshire, then hung on the wall of a house in Eves Hill, Dudley, in the English Midlands, and photographed there. The original front cover showed only the painting of the old man with the bundle of sticks; only when the gatefold was opened out would the viewer see the more modern tower blocks beyond. In January 2010 the cover for Led Zeppelin’s fourth album was among the ten chosen by Britain’s Royal Mail for a set of ‘Classic Album Cover’ postage stamps.

The inside illustration was entitled ‘The Hermit’, reminiscent of the Tarot card of the same name, and credited to Barrington Colby MOM, although apparently this is a misprint and the artist’s surname is actually Coleby. Jimmy Page arranged the printing of the lyrics to ‘Stairway to Heaven’ on the inner bag. He came across the typeface in the 19th Century art magazine ‘Studio’ and had an alphabet created from it, in which the ‘Stairway To Heaven’ lyrics were reprinted. The album has alternatively been referred to as Four Symbols, Untitled, Runes, Sticks, ZoSo and The Hermit.