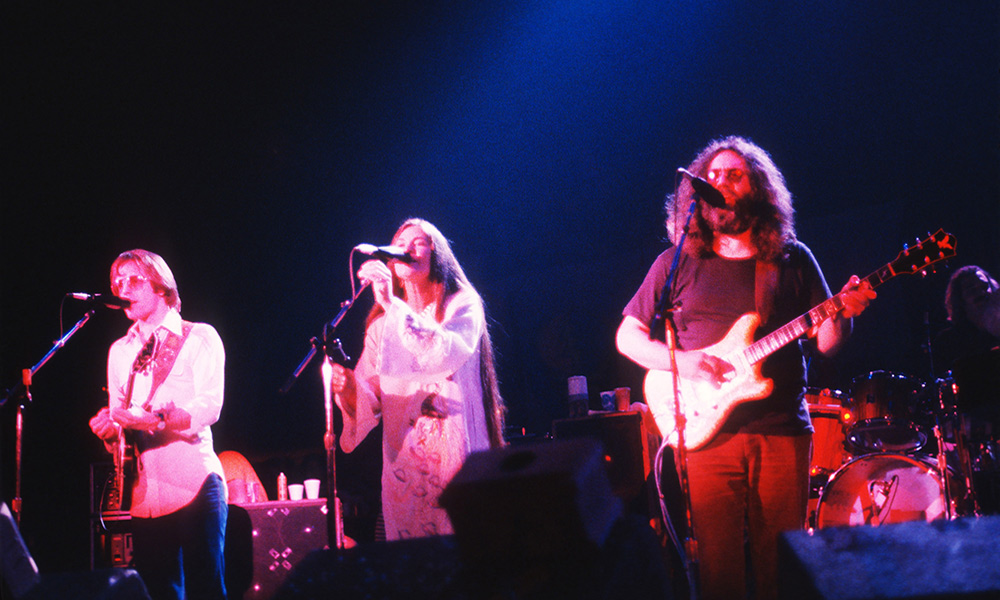 Jerry Garcia was destined to be a musician. Born in San Francisco on August 1, 1942, Garcia was named after legendary Broadway composer Jerome Kern, who wrote more than 700 songs in his lifetime including “The Way You Look Tonight,” “Smoke Gets in Your Eyes,” and “Ol’ Man River.”

The Grateful Dead began their career as the Warlocks, a group formed in early 1965 from the remnants of a Palo Alto, California jug band called Mother McCree’s Uptown Jug Champions.

After seeing Richard Lester’s 1964 Beatles film, A Hard Day’s Night, Garcia and company decided to go the rock route with their band.

Grateful Dead performed its first gig on Dec. 4, 1965, at a house near the San Jose Civic Auditorium, where the Rolling Stones were playing that same evening

In 1967, all six members of the Dead were busted by California narcotics agents for possession of marijuana at the groups’ 710 Ashbury Street House in San Francisco, California.

The band’s first LP, The Grateful Dead, was released on Warner Brothers in 1967.

In 1971 36 Grateful Dead fans were treated for hallucinations caused by LSD after they unwittingly drank spiked apple juice served at a gig at San Francisco’s Winterland.

The Dead built its brand of T-shirts with the use of so many iconic images, from dancing terrapins and patriotic skeletons to skulls and roses to dancing” bears.

Ron McKernan died aged 27 in 1973 from liver failure brought on by alcohol poisoning. He was a founding member and keyboard player with the Dead and played in the group from 1965 to 1972. Unlike the other members of the Grateful Dead, McKernan avoided psychedelic drugs, preferring to drink alcohol. By 1971, his health had been affected by alcoholism and liver damage and doctors advised him to stop touring.

The Grateful Dead played 2,317 shows during their career, and released 13 studio albums.

The Watkins Glen outdoor summer jam was held outside of Watkins Glen, New York in 1973 with The Allman Brothers Band, The Grateful Dead and The Band. Over 600,000 rock fans attended. Many historians claimed the event was the largest gathering of people in the history of the United States. 150,000 tickets were sold for $10 each, but for all the other people it was a free concert. The crowd was so huge that a large part of the audience was not able to see the stage.

The Dead were never a commercial success on the charts, yet several of the group’s albums have been certified platinum or better. The top-seller is the triple-platinum collection Skeletons from the Closet: The Best of Grateful Dead (1974).

Keyboard player Keith Godchaux died aged 32 in 1979 after being involved in a car accident. He also co-wrote songs with Lowell George (of Little Feat) and was a member of The New Riders of the Purple Sage.

They promoted a sense of community among their fans, who became known as “Deadheads”, many of whom followed their tours for months or years on end.

In 1947, young Garcia lost most of the middle finger on his right hand in a wood-chopping accident. His handprint, with the mostly missing finger, would become a signature logo.

In 1992 a range of eight ‘ties’, designed by Jerry Garcia went on sale in the US. President Bill Clinton bought a set. The collection grossed millions in the US by the end of the year.

Garcia enlisted in the Army at age 17 in 1960. He was discharged a few months later, reportedly due to “lack of suitability to the military lifestyle.”

Garcia was also a prolific artist, whose paintings and sketches can be seen in the book Harrington Street, and even on a range of ties.

In the 1990s, the Grateful Dead earned a total of $285 million in revenue from their concert tours, the second highest during the 1990s, with the Rolling Stones earning the most.

More than 2,000 of the band’s concerts have been preserved by tapers, who were given their own area behind the mixing desk in venues, and on occasion were allowed to connect directly to the desk.

Jerry Garcia died on August 9, 1995, and a few months later, the remaining members of the Grateful Dead decided to disband. Yet, many of them would continue to play together under different names, including Furthur, The Dead and The Other Ones.

The Dead threw a benefit show for the Springfield Creamery in Springfield, Oregon. Tickets were printed on the backs of the Creamery’s yogurt labels. It was one of the hottest days of the year, and mostly everybody was naked.

They had a very large PA system known as the Wall of Sound with 26,400 watts of audio power through 604 speakers. It was the largest concert sound system built at that time.

In the late 1990s, a Dead-loving taxonomist discovered a new species of cockroach (a wood roach) and named it Cryptocercus garciai after Garcia. In 1995, just three months after his passing, two astronomers named an asteroid after the late singer as well.

The newly refurbished Grateful Dead’s original tour bus went on display at the Volo Auto Museum in Volo, Illinois in 2005. The 1965 Gillig bus, which Jerry Garcia and the rest of the Dead dubbed ‘Sugar Magnolia’ was used by the band on their frequent tours across the US between 1967 and 1985. The ceiling was lined with hundreds of vintage rock posters featuring The Beatles, Jimi Hendrix, Janis Joplin and others who had visited the bus.

In 2015, the four surviving core members marked the band’s 50th anniversary in a series of concerts that were billed as their last performances together.

Important Dates In The Life Of The Grateful Dead: