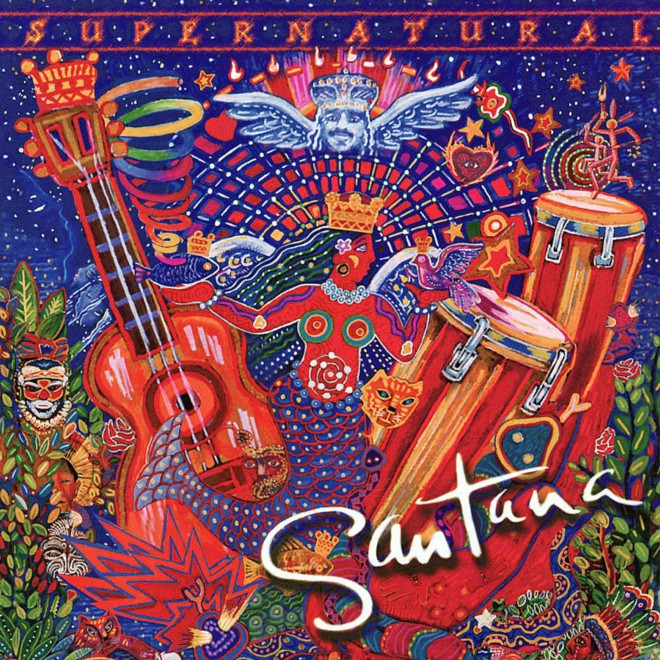 The sound of Carlos Santana is one of the world’s best-known musical signatures. For more than five decades, from Santana’s earliest days as a groundbreaking Afro-Latin-blues-rock fusion outfit in San Francisco – Carlos has been the visionary force behind artistry that transcends musical genres and generational, cultural and geographical boundaries. Long before the category now known as “world music” was named, Santana’s ever-evolving sound played on percussion instruments such as timbales and congas not generally heard in rock was always ahead of its time.

Carlos Santana was born July 20, 1947 in Autlán de Navarro, Jalisco, Mexico. He began playing the violin at age five; by age eight, however, he had switched to the guitar. As a teenager, he played in bands in Tijuana, Mexico, where he was exposed not only to the local norteño music but also to blues, especially to guitarists T-Bone Walker and B.B. King. Carlos was also heavily influenced by Ritchie Valens at a time when there were very few Mexicans in American rock and pop music.

His family moved to San Francisco in the mid Sixties and by late 1966, Santana had formed the Santana Blues Band with guitarist keyboardist/singer Gregg Rolie. During the group’s early days, the line-up was volatile, with the membership settling to Carlos, Rolie, bassist David Brown, drummer Bob “Doc” Livingston, and percussionist Marcus Malone in 1967, around which time the group lost the “Blues Band” from their name.

Promoter Bill Graham discovered the band and booked Santana to play his Fillmore West on June 16, 1968. The band then soon landed a deal with Columbia Records. Prior to recording their first album in early 1969, Santana swapped Livingston and Malone for Michael Shrieve and Mike Carabello, adding percussionist Jose Chepito Areas as well. This line-up recorded the group’s eponymous debut.

After appearing at the the Seattle Pop Festival in July 69 and the three day Atlantic City Pop Festival the following week, they had a career-making appearance at the Woodstock Festival along with Janis Joplin, Jimi Hendrix, Crosby Stills Nash & Young, The Who and Creedence Clearwater Revival. This appearance introduced them to an international audience resulting in their debut album becoming a swift success, climbing its way to number four on Billboard’s album charts during the course of its two-year run on the charts.

In April the following year Santana began sessions for what would be their breakthrough album Abraxas at Wally Heider Recording Studio, San Francisco, California. When released in September of this year, Abraxas peaked at number one on the US chart. The album’s mix of rock, blues, jazz, salsa and other influences was well received. The album included two of Santana’s most enduring and well-known hits, “Oye Como Va”, and the Peter Green penned “Black Magic Woman” (which appeared on the 1968 Fleetwood Mac album The Pious Bird of Good Omen). Abraxas spent six weeks at number one on the Billboard chart at the end of 1970 and remained on the charts for 88 weeks.

Santana albums conceived during the next ten years followed the same formula, and in 1990, Santana kicked off the decade with a new album Spirits Dancing in the Flesh. Santana toured widely over the next few years but there were no further new album releases, and eventually, he was even without a recording contract.

Their fortunes were revived when their old supporter Clive Davis signed the group to Arista in 1998. Davis designed a star-studded comeback for the band that took the form of Supernatural, released on June 15, 1999. The album exceeded any possible expectations reaching number one in eleven countries.

The single “Smooth,” a song featuring Matchbox Twenty singer Rob Thomas (who also co-wrote the tune), topped the US charts for 12 weeks, the first chart-topping song in Carlos Santana’s long-running career. On Billboard magazine’s rankings of the top songs of the first 50 years of the Billboard Hot 100 singles chart, “Smooth” was ranked as the number-two song overall (behind only “The Twist” by Chubby Checker) and the number one rock song in the history of the chart.

Supernatural became an international smash, topping the charts throughout the world, and winning eight Grammy Awards, including Record of the Year and Album of the Year. The album produced another number one single in the form of “Maria Maria,” which featured Wyclef Jean and the G&B Product. Carlos later collaborated with chef Roberto Santibañez to open five restaurants of the same name, after the song. The majority are located in the San Francisco Bay Area, and other locations are in Arizona and Texas.

On a personal note, during a Santana concert at First Midwest Bank Amphitheatre in Tinley Park, Illinois, Carlos proposed to his girlfriend, Cindy Blackman who had just finished a drum solo during the band’s set. The couple married in December 2010.

Carlos Santana published his memoir, The Universal Tone: Bringing My Story to Light in 2014.