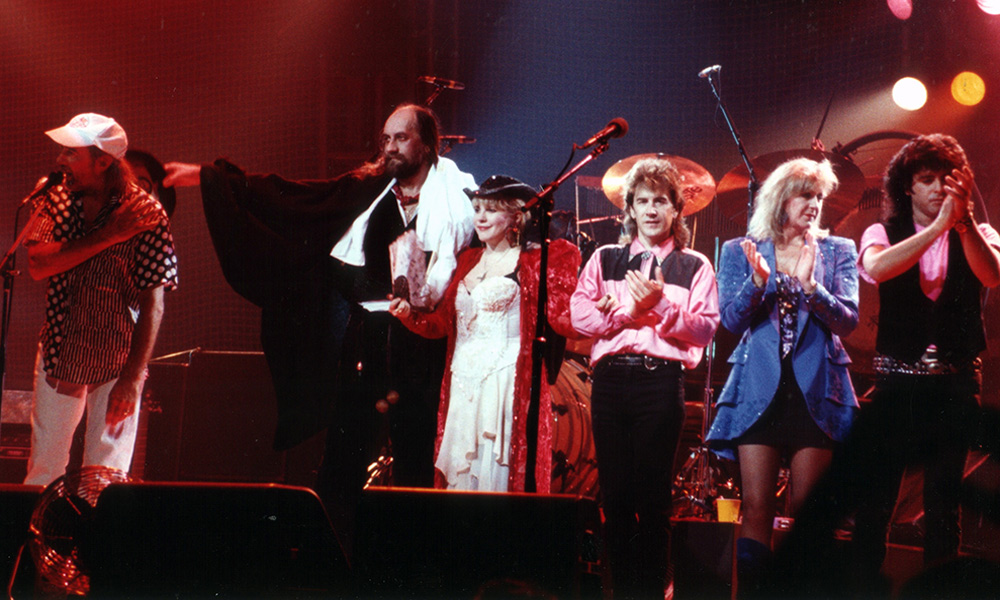 The story of Fleetwood Mac is complicated to say the least, and one of rock’s most famous soap operas. The British Blues band that formed in the late Sixties transformed into one of the biggest and best selling acts a decade later.

Guitarist and songwriter Peter Green was born in Bethnal Green, London on 29 October 1946. His brother, Michael, taught him his first guitar chords and by the age of eleven Green was teaching himself. He began playing professionally by the age of fifteen. He first played bass guitar in a band called Bobby Dennis and the Dominoes.

Green became a major figure in the British blues movement and in 1966, he played lead guitar in Peter Bardens’ band “Peter B’s Looners”, where he met drummer Mick Fleetwood. Around this time Green had the opportunity to fill in for Eric Clapton in John Mayall & the Bluesbreakers for three concerts and shortly after, when Clapton left the Bluesbreakers, Green became a full-time member of Mayall’s band.

John McVie (who originally trained as a tax inspector), was also a member of John Mayall & the Bluesbreakers (from 1964 to 1967) and joined Fleetwood Mac in 1967. His surname, combined with that of Mick Fleetwood, was the inspiration for the band’s name.

John McVie and Mick Fleetwood are the only two members of the group to appear on every Fleetwood Mac release, and for over forty years have been the group’s only remaining original members.

Born in Redruth, Cornwall, Mick Fleetwood lived in Egypt and Norway for much of his childhood years as his father travelled with the Royal Air Force.

In 1968 Fleetwood Mac scored a hit with Green’s “Black Magic Woman” (later covered by Santana), followed by the guitar instrumental “Albatross” (1969), which reached number one in the British singles charts.

“Sun King” from Abbey Road by The Beatles was based on Fleetwood Mac’s “Albatross.” George Harrison said the recording was inspired by the song which they all admired.

Danny Kirwan joined as a third guitarist in 1968. Keyboardist Christine Perfect, who contributed as a session musician from the second album, married McVie and joined in 1970.

In 1970 Peter Green talked about his plans to give all his money away. The following year Green confronted his accountant with a gun after he sent him an unwanted royalty check. The guitarist went to jail briefly before being transferred to an asylum and was committed to a mental hospital in 1973.

By early 1971, Spencer grew more disillusioned with the group. During a US tour he left the hotel abruptly one afternoon and disappeared. He was found several days later to have joined the religious cult Children of God.

The early 1970s was a rocky time for the band, with a revolving door of musicians. Furthermore, a group impersonating Fleetwood Mac (which later became Stretch) was touring the United States with encouragement from the band’s manager, Clifford Davis. The tour collapsed, but it led to a protracted lawsuit between Davis and Fleetwood Mac.

In late 1974, while Mick Fleetwood was scouting studios in Los Angeles, he was introduced to folk-rock duo Lindsey Buckingham and Stevie Nicks. Fleetwood Mac asked Buckingham to be their new lead guitarist, and Buckingham agreed on condition that Nicks would also join the band.

Buckingham had been in a psychedelic rock band, Fritz, but two of its musicians were leaving for college. He asked Nicks in mid-1967 to replace the lead singer. Fritz later opened for Jimi Hendrix and Janis Joplin from 1968 until 1970.

Their 1975 self-titled album, Fleetwood Mac, reached number one in the United States and was the best-selling album of the year of its release and to date has sold over 40 million copies worldwide.

In 1976, McVie began an on-the-road affair with the band’s lighting director, which inspired her to write “You Make Loving Fun”, a top-10 hit from Rumours. In November 1977, Stevie Nicks and Mick Fleetwood secretly began an affair. Fleetwood was still married to Jenny Boyd, (the younger sister of Pattie Boyd the first wife of George Harrison and subsequently wife of Eric Clapton). Mick Fleetwood later left Boyd for Nicks’s best friend, Sara Recor.

Nicks had been romantically linked to Eagles drummer, vocalist Don Henley during the late 1970s, and briefly to Eagles songwriter J. D. Souther.

Rumours Fleetwood Mac’s second album after the arrival of Buckingham and Nicks, produced four US Top 10 singles and remained at number one on the American albums chart for 31 weeks.

One of the more peculiar details of Herbert Worthington’s iconic Rumours cover photo is the pair of wooden balls dangling from the crotch of Mick Fleetwood’s extremely tight pants. More than a spur-of-the-moment boyish prank, the balls – actually “lavatory chains” – date back to one of the earliest Mac gigs.

With great success came wild extravagance, as their concert rider called for 14 limos to be available at a moment’s notice and for every room Nicks stayed in to be painted pink and equipped with a white piano (which often had to be lifted in by crane).

“The Chain” (from Rumours) has the distinction of being the only song credited to all five members of the late Seventies line-up.

The albums Tusk, Tango In The Night and Behind The Mask all reached number one on the US charts.

In 1981, while remaining a member of Fleetwood Mac, Nicks began her solo career, releasing the studio album Bella Donna, which topped the Billboard 200.

In June 1996, Peter Green was voted the third-best guitarist of all time in Mojo magazine.

In 1998 Christine McVie opted to leave the group and lived in semi-retirement for nearly 15 years.

In 1998, Ronald Anacelteo was arrested for stalking Stevie Nicks. After leaving his Denver psychiatric facility, he later told police he planned to kidnap and impregnate her, since he believed her witchcraft would cure his homosexuality.

Nicks became an ordained minister with the Universal Life Church and officiated at the wedding of Deer Tick singer John McCauley and singer-songwriter Vanessa Carlton in 2013.

Important Dates In The Life Of Fleetwood Mac: