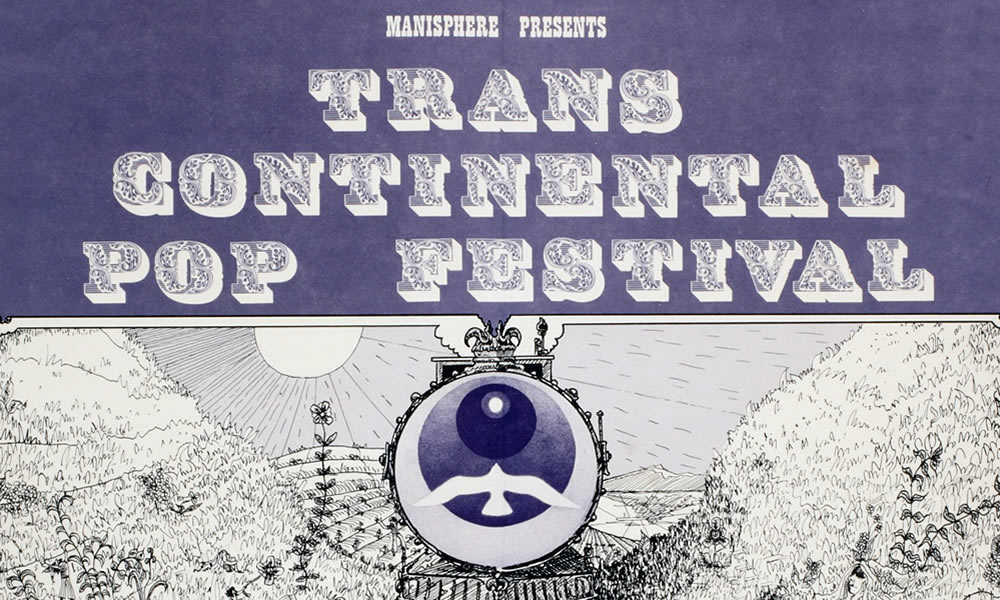 I wish I had a time machine. Like Marty McFly in Back To The Future. I would climb inside Doc Brown’s DeLorean DMC-12 and set the controls to 27th June 1970 and join Janis, Robbie, Levon and Jerry on the Trans-Continental Express, as they grooved their way across Canada by train.

The Trans-Continental Pop Festival (better known as the Festival Express) set off on a warm summer’s day in 1970. The now legendary tour was unique in that rather than flying to each city, most of the acts travelled on a chartered train. The Grateful Dead, Janis Joplin (with her Full-Tilt Boogie Band), The Band, Delaney & Bonnie and Friends, The Flying Burrito Brothers and Buddy Guy Blues Band all jammed, drank, slept and rode the train in between playing shows in Toronto, Winnipeg, Saskatoon and Calgary.

The chartered Canadian National Railways train consisted of 14 cars, equipped with lounges and sleeping compartments, with electricity sockets so that musical instruments could be plugged in. Allegedly, during the trip, a coke-fuelled Jerry Garcia talked his way into sitting in the driver’s seat and was left at the controls, regularly sounding the train’s whistle.

The train journey between cities ultimately became a combination of non-stop jam sessions and partying, fueled by alcohol. One highlight of the documentary is a drunken jam session featuring The Band’s Rick Danko, Jerry Garcia and Bob Weir from the Grateful Dead and Janis Joplin.

Unsurprisingly the passengers drank the bar dry and, as is shown in the film, the musicians passed around a hat and the train made an unscheduled stop to find a liquor store for much-needed supplies. I seem to remember that, much to the bemusement of the owner, they bought most of the contents of the store.

The tour had an original budget of about $900,000 but, largely due to less than predicted turnout, it ultimately lost between $350,00 and $500,000 for the promoters. Part of the reason for this was The May 4th Movement (inspired by the killing of four students by Ohio National Guardsmen at Kent State University), who demanded free music and an end to “The RRRRip-Off Express” decrying ticket prices; over 2,500 protestors gathered outside the first show in Toronto.

The tour featured now-legendary performances by the Grateful Dead, The Band and Janis Joplin. The Dead were in the process of transforming their sound from dense, jammed psychedelia to the country/folk harmonies of Workingman’s Dead and American Beauty, The Band’s performance showed them at the pinnacle of their powers and for Joplin, it would turn out to be some of her last performances, as she died two months later.

Because the Festival Express tour turned out to be a complete financial disaster, the film project was shelved as the promoters sued the film-makers, and the footage mysteriously disappeared. Some of the film’s reels turned up in the garage of the original producer Willem Poolman, where they had been stored for decades and used at various times as goal posts for ball hockey games played by his son Gavin.

Eventually, in 1999, a plan was hatched to resurrect the film, and many more reels were found in the Canadian National Film Archives vault, where they had been kept in pristine condition. Director Bob Smeaton (The Beatles ‘Anthology) was hired, and the eventual finished show was premiered in 2003, grossing more than $1 million in movie theatres before being released on DVD to much acclaim.

Showing that a good idea is never too good to keep down, in 1978, legendary UK Indie label Stiff records borrowed the idea for the ‘Be Stiff Route 78 tour’, all the acts travelling around the UK by specially-chartered train. Wreckless Eric, Lene Lovich, Jona Lewie, Mickey Jupp and Rachel Sweet were the recipients of the honour this time around, although the tour was a lot longer than the original Canadian week. The ‘Be Stiff’ Tour lasted from October 10 to November 19, 1978, a full 5 weeks of riding the rails, with a lot less excess: 16-year-old Rachel Sweet was doing sums rather than lines as the train crisscrossed the country.

Still, it’s the only way to travel…