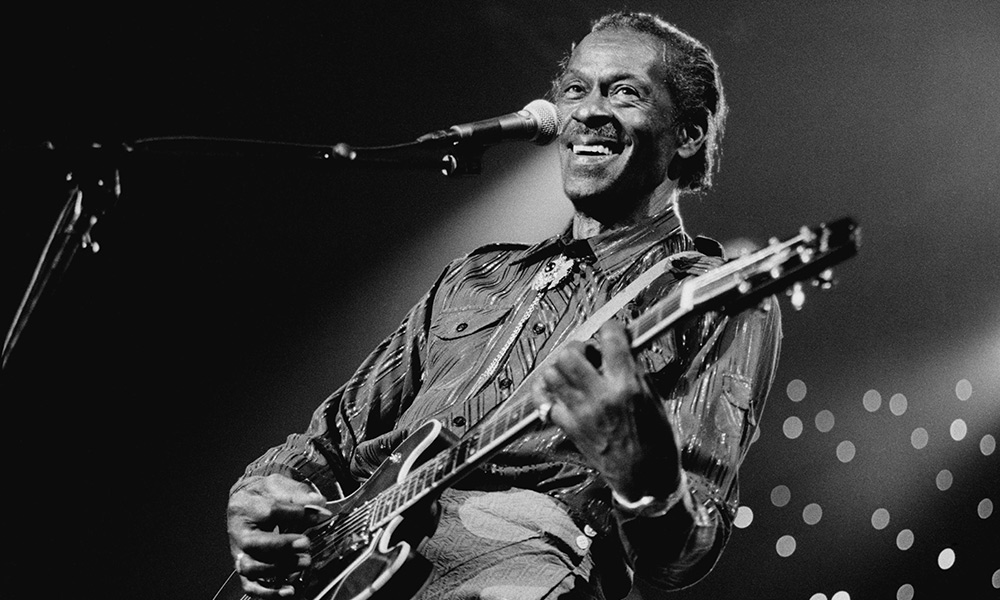 American guitarist, singer, and songwriter Chuck Berry was born on 18th Oct 1926. Berry was one of the pioneers of rock and roll music, he refined and developed rhythm and blues into the major elements that made rock and roll distinctive, with lyrics focusing on teen life and consumerism and his own brand of showmanship that became a major influence on subsequent rock music.

Without Chuck Berry, there’d be no Beatles and no Rolling Stones. Now can you imagine a world without the Stones? The only people who would’ve met Mick Jagger would have been his pupils at Dartford Boys Grammar School, where Mr. Jagger (or ‘Jumpin Jack Flash’ as he was known by his class) worked as a PE instructor. He retired when he was 60 and is now regularly sighted around local bars chasing young ladies. And Keith Richards? Well, I can’t actually think of anything The Human Riff could’ve done except play the guitar. So maybe Keith would be busking at the bottom of escalators deep beneath the London underground network in London.

“Johnny B. Goode” was one of the examples of music sent out into space In such good company as well. The musical selection was varied: Beethoven, Guan Pinghu, Mozart, Stravinsky, and Chuck Berry. You see, he IS the King of Rock and Roll, no Elvis Presley records in sight!

The Voyager Golden Records were included on both Voyager spacecraft, which were launched in 1977. They contain sounds and images selected to portray the diversity of life and culture on Earth, and are intended for any intelligent extraterrestrial life form, or for future humans, who may find them. The Voyager spacecraft are not heading toward any particular star, but Voyager 1 will be within 1.6 light years of the star AC+79 3888 in the Ophiuchus constellation in about 40,000 years. Now that might seem like a long time to you, but if I was an alien, I know it would be worth the wait.

Voyager will come crashing down on planet Zonk, the door will burst open on impact, and out will roll that disc. The three-headed men will excitedly gather around the smoldering craft, get out their record player (where did that come from?), and marvel at the sounds coming from that small disc.

First that guitar riff and then…

Deep down in Louisiana close to New Orleans
Way back up in the woods among the evergreens
There stood a log cabin made of earth and wood
Where lived a country boy named Johnny B. Goode
Who never ever learned to read or write so well
But he could play the guitar just like a-ringin’ a bell

And you know, it will sound even better to those aliens, because having three heads, they’ll all have six ears. All the better for listening to rock and roll music with.

“Johnny B. Goode” is Berry’s masterpiece, as it brought together all the elements of his unique musical sound. It cemented his place in rock history and inspired so many young men to learn the guitar and form bands. Without Chuck Berry, Bruce Springsteen would be a folk singer.

Chuck outlived so many of his contemporaries. Berry is like all great innovators, truly original, and unique.

Some say he only wrote one song, which has been re-worked over and over again, but I don’t agree with that. And anyway, if it was just one song, it was a bloody good one.

“If you tried to give rock and roll another name, you might call it ‘Chuck Berry’.” John Lennon