The Smiths were the definitive British indie rock band of the ’80s, marking the end of synth-driven new wave and the beginning of the guitar rock that dominated English rock into the ’90s. Formed in Manchester in 1982, the group consisted of vocalist Morrissey, guitarist Johnny Marr, bassist Andy Rourke and drummer Mike Joyce.

Sonically, the group was indebted to the British Invasion, crafting ringing, melodic three-minute pop singles. But their scope was far broader than that of a revivalist band. Inspired by the D.I.Y. ethics of punk, The Smiths became the first indie outsiders to achieve mainstream success on their own terms. All four of their studio albums reached the top five of the UK Albums Chart, including Meat Is Murder which hit number one.

1. Morrissey attended St Mary’s Secondary School and then Stretford Tech School, where he gained three O Levels including one in English Literature. When he formed The Smiths, he’d pay tribute to his harrowing experiences of school with the track “The Headmaster Ritual” from Meat Is Murder.

2. After leaving school, Morrissey found himself struggling to find fruitful employment. He worked for the Inland Revenue as a filing clerk and later as a hospital worker.

3. Guitarist, songwriter Johnny Marr had aspirations to be a professional football player. He was approached by Nottingham Forest and had trials with Manchester City.

4. Morrissey’s parents were both Irish Catholic immigrants who moved to Manchester the year before he was born. His father, Peter, worked as a hospital porter while his mother Elizabeth was an assistant librarian.

5. Marr formed his first band, the Paris Valentinos, at the age of 13, with Andy Rourke and Kevin Williams (who later became an actor), playing Rolling Stones and Thin Lizzy covers.

6. From an early age, Morrissey’s great obsession was music. His first gig was T Rex in Belle Vue, Manchester in 1972. Years later he’d later bump into frontman Marc Bolan at the Midland Hotel and ask for his autograph – only for Bolan to refuse and walk off.

7. As well as writing numerous letters to the NME, Morrissey nearly became a music journalist when he was invited for an interview with now-defunct magazine Sounds. He also wrote two books, which were both later published by Babylon Books: a love-letter to his favourite band, The New York Dolls and another ode to one of his screen heroes with James Dean Is Not Dead.

8. On 31 August 1978, a 19-year-old Morrissey was briefly introduced to the 14-year-old Johnny Marr by mutual acquaintances Billy Duffy and Howard Bates at a Patti Smith gig at Manchester’s Apollo Theatre. Morrissey later met Marr again in 1982 when he turned up at Morrissey’s doorstep to ask if he was interested in forming a band.

9. Around the time of the band’s formation, Morrissey decided that he would be publicly known only by his surname, with Marr referring to him as “Mozzer” or “Moz”.

10. The Smiths gave their first public performance in October 1982 as a support act for Blue Rondo à la Turk during a student music and fashion show, “An Evening of Pure Pleasure”, at The Ritz in Manchester.

11. The band approached EMI for a contract, but were turned down. Morrissey and Marr subsequently visited London to hand a cassette of their recordings to Geoff Travis of Rough Trade Records. Although not signing them to a contract straight away, he agreed to cut their song “Hand in Glove” as a single.

12. Morrissey’s career as a pop star got off to a sluggish start. His first role was as frontman of The Nosebleeds (also known as Ed Banger and the Nosebleeds), until the departure of singer Ed Garrity – a gig he landed after responding to an advert placed by guitarist Billy Duffy (who’d later join The Cult) in Virgin Records. It was Duffy who suggested that Morrissey team up with Johnny Marr.

13. Morrissey represented his school in both the 100 and 400 metres and was also a football fan. In fact, he was so enthralled when his Dad took him to watch Manchester United genius George Best as an eight-year-old that he fainted.

14. Morrissey said that they came up with the name ‘The Smiths’ because it was the most ordinary name and it was time the ordinary people showed their faces.

15. The band’s first single “Hand in Glove” released in May 1983 only reached No. 124 in the UK chart. That same year, a cover version recorded by Sandie Shaw featuring Smiths members Marr, Andy Rourke and Mike Joyce as backing musicians reached No. 27 on the UK Singles Chart.

16. Their eponymous debut studio released on 20 February 1984 reached number two on the UK Albums Chart, staying on the chart for 33 weeks. The sleeve designed by Morrissey features American actor Joe Dallesandro in a cropped still from Andy Warhol’s 1968 film Flesh.

17. Bassist, Andy Rourke was temporarily fired from the band because of his alleged heroin addiction. Rourke claimed that Morrissey left a post-it-note on his car windscreen that read “Andy you have now left the Smith’s. Good luck.” Morrissey denies of the existence of any such note.

18. “How Soon Is Now?” (originally a B-side of the 1984 single “William, It Was Really Nothing”) became the band’s first US hit after becoming a club favourite.

19. The Smiths’ second album, Meat Is Murder, was released in February 1985. The LP gave Morrissey the platform to promote his long-held belief in animal rights. He had been a vegetarian since the age of 11.

20. The cardigan Morrissey wears in The Queen Is Dead album sleeve was designed by Bodymap, a 1980s design collective famed for their chic fashions.

21. The backing vocals on “Bigmouth Strikes Again” are credited to Ann Coates, however the singer was none other than a pitch-shifted Morrissey. His chosen nom de plume was a play on Manchester district Ancoats, a location which also featured in a road sign on the back of The Smiths’ Strangeways Here We Come album.

23. Morrissey brought a political stance to many of his interviews, courting further controversy. During Smiths days among his targets were the Thatcher administration, the monarchy, and his musical contemporaries. When asked about Band Aid, he once quipped, “One can have great concern for the people of Ethiopia, but it’s another thing to inflict daily torture on the people of England,” (referring to the Band Aid single).

24. In 1986, when the Smiths performed on the British music programme The Old Grey Whistle Test, Morrissey wore a fake hearing aid to support a hearing-impaired fan that was ashamed of using one.

25. “Some Girls Are Bigger Than Others” references Carry On Cleo, the 1964 film starring Sid James, Kenneth Williams and Charles Hawtrey. Hawtrey later appeared on the cover of The Very Best Of The Smiths compilation.

26. The Smiths completed recording of The Queen Is Dead at Jacobs Studios in October 1985. Studio owner Andy Fernbach has said Status Quo, who were recording “You’re In The Army Now” next door, were briefly considered to play on the album.

27. The group’s cover artwork had a distinctive visual style and often featured images of film and pop stars, usually in duotone. Design was by Morrissey and Rough Trade art co-ordinator Jo Slee. The covers of singles rarely featured any text other than the band name, and the band itself did not appear on the cover of any UK release.

28. By 1987 Johnny Marr was exhausted and took a break from the band. The breakdown in the relationship has been primarily attributed to Morrissey’s irritation by Marr’s work with other artists and Marr growing frustrated by Morrissey’s musical inflexibility. Marr particularly hated Morrissey’s obsession with covering 1960s pop artists such as Twinkle and Cilla Black. Marr recalled in 1992, “That was the last straw, really. I didn’t form a group to perform Cilla Black songs.”

29. The bands fourth and final studio album Strangeways, Here We Come (taking its title from Manchester’s notorious Strangeways Prison) was released on 28 September 1987, several months after their disbandment.

The Smiths – The Day I Was There:

The Smiths – The Day I Was There tells the story of The Smiths in the words of over 400 fans from Britain and the US. With memories from the earliest Smiths shows at UK clubs through to the last ever gig at London’s Brixton Academy, you’ll see a portrait of The Smiths from the perspective of fans, promoters and support acts with personal photographs, memorabilia, fascinating anecdotes and stories that have never been published before. 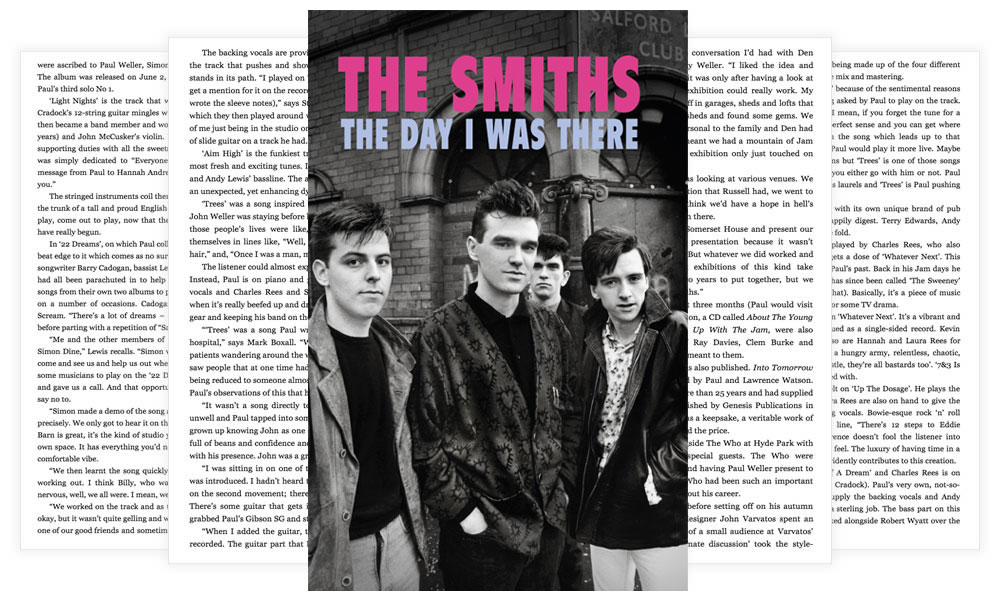 Important Dates In The Life Of The Smiths: