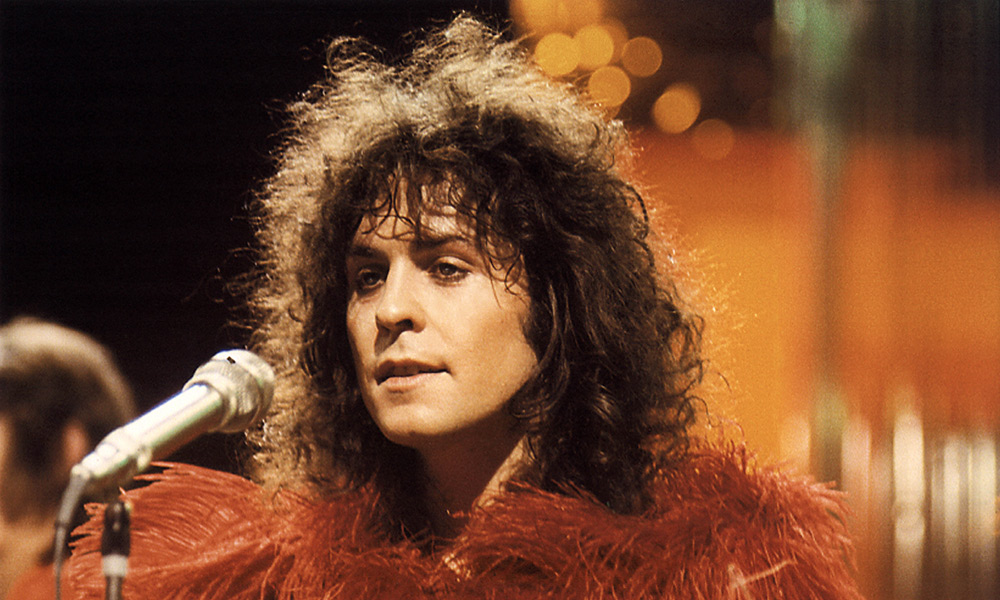 On 16th Sept 1977, 29-year-old former T. Rex singer Marc Bolan was killed instantly when the car driven by his girlfriend, Gloria Jones, left the road and hit a tree in Barnes, London.

The couple were on the way to Bolan’s home in Richmond after a night out at a Mayfair restaurant. A local man who witnessed the crash said, “When I arrived a girl was lying on the bonnet and a man with long dark curly hair was stretched out in the road; there was a hell of a mess”.

Marc had become a huge star in the UK, and at some time in the early to mid-’70s, he was probably the ‘biggest’ pop star we had. He achieved that rare thing — he had a massive teenybopper audience, yet secretly the cool guys appreciated how good he really was.

Like his friend David Bowie (they first met and became friends in the late ’60s), Bolan’s career looked for a time like it would never take off. He couldn’t quite get it right, as a solo singer or in John’s Children, but after major radio support from John Peel, Bolan’s psychedelic-folk rock acoustic duo Tyrannosaurus Rex started to gain momentum.

One of their highlights was when the duo played at the first free Hyde Park concert in 1968 on the same bill as Pink Floyd and Jethro Tull.

The following year, Bolan shortened the group’s name to T. Rex and wrote and recorded “Ride a White Swan”, dominated by a rolling, hand-clapping back-beat and Bolan’s electric guitar (he was a great guitarist). When released, the single took forever to work its way into the charts, eventually peaking at number 2.

“Ride a White Swan” made Bolan a star and boosted T. Rex’s fame and reputation, and the follow-up single “Hot Love” went to No. 1 for six weeks as the phenomenon of glam rock took hold. These were the days when David Bowie, Roxy Music, Slade, Sweet, Elton John, The Faces, and Mott The Hopple were riding high in the UK charts.

T. Rex, aided by Bolan’s ability to deliver the catchiest of pop songs, saw them ultimately enjoying four #1 singles and four number 2 singles in the UK by the end of 1972.

Trying to crack America, Bolan spent a good deal of his time in the U.S. for much of the next three years (also for tax reasons), continuing to release singles and albums which, while less popular with the masses, were full of unusual lyrics and sometimes eccentric musical experiments.

Returning to the UK in 1977, Marc embraced the punk movement by inviting the Damned to support him on his UK tour. At the same time, Granada Television commissioned Bolan to front a six-part series called Marc, where he introduced new and established bands and performed his own songs.

The last episode featured a unique Bolan “duet” with his old mate David Bowie, during which Bolan fell off the stage before the singing had commenced. With no time for a retake, the performance complete with the stage fall was aired, showing Bowie’s amusement, which was clearly visible.

This became his last public appearance. Bolan died on 16 September 1977, two weeks before his 30th birthday.

I was lucky enough to meet Marc once; I bumped into him on the stairs leading up to EMI’s promotional offices, one late afternoon in Manchester, England. Bolan was in town playing a concert that night. I was 18 and leaving the building as he was coming in. At the time he was the most famous person I’d ever met!

I remember thinking, I have to talk to him, so I said hello, and we chatted, he was so normal. After our brief exchange, he asked me if I was going to his show that night and I told him I couldn’t as I was also in a group and we had a gig that night. To my amazement, he then continued our conversation, wanting to know what we were called, what sort of music we played, what I played… I couldn’t believe it! This was Marc Bolan, the superstar, asking me, a normal kid, about my crappy little group. I’m so pleased I met him that day.

That’s who Marc Bolan was — a normal superstar. 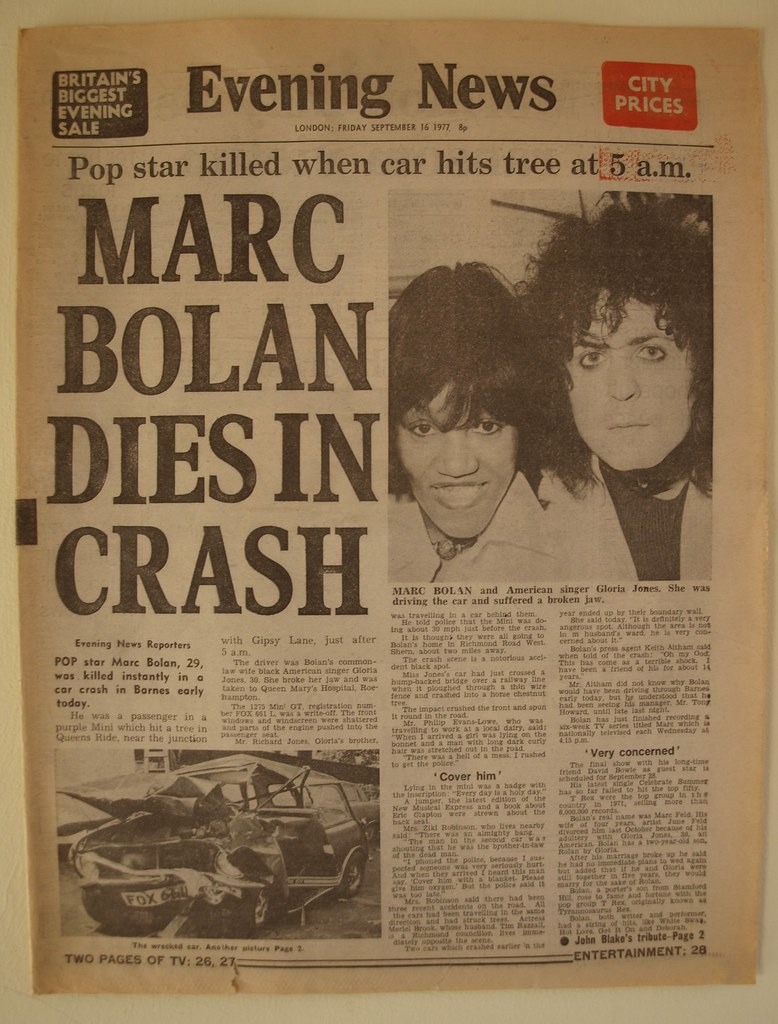 Important Dates In The Life Of Marc Bolan: