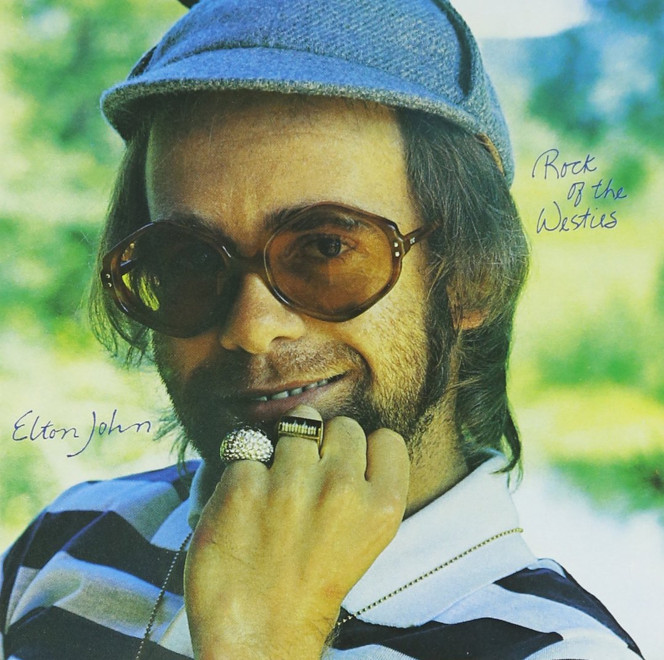 In 1973, Elton John was at No.1 on the US album chart with Goodbye Yellow Brick Road, the singer’s seventh album and third US No.1. Recorded at the Château d’Hérouville, the album contains the Marilyn Monroe tribute, “Candle in the Wind”, as well as three successful singles: “Bennie and the Jets”, “Goodbye Yellow Brick Road”, and “Saturday Night’s Alright for Fighting”.

Reginald Kenneth Dwight had arrived. America loved him, the world loved him.

Reginald was raised in Pinner, Middlesex in the council house of his maternal grandparents. He was educated at Pinner Wood Junior School, Reddiford School, and Pinner County Grammar School until age 17 when he left just prior to his A Level examinations to pursue a career in the music industry. His father, who served as a squadron leader in the Royal Air Force, tried to steer him toward a more conventional career, such as banking.

That’s an interesting thought – Elton John working behind a desk in a high street bank, humming the tunes in his head that the world would never hear. That’s a very sad thought; I can’t imagine a world without the music of Elton John. No “Your Song”, “Daniel”, “Saturday Night’s Alright For Fighting”, “Rocket Man”, “Don’t Let The Sun Go Down On Me”, “Crocodile Rock”, “Don’t Go Breaking My Heart”. I’ll be honest here, I don’t own one Elton John record, but I know his music so well, from the radio, TV, and, well… I grew up listening to Elton John.

I remember hearing “Your Song” for the very first time and like Dylan and Springsteen, you knew there was something special about that voice. Okay, Bob and Bruce never wore platform boots, ridiculous glasses or bright yellow satin pants, but maybe they should have!

Elton John is an entertainer and a great musician. I was lucky enough to meet him once in the middle of winter in 1982, in a very cold Helsinki, Finland. I was working there at the time, blagged some tickets to see him in concert, and through a friend was invited back to his hotel for drinks and dinner with Elton and his band. I was in my early 20s and I’d never met anyone so famous before.

I was nervous, but I had no need to be. Elton was the perfect host and by chance, I happened to sit opposite him during dinner. I had a great night. We talked for ages about his two passions: music and football. The only goof I made was when after the meal I offered Elton a cigarette. He said, “No thanks, I don’t smoke but I love fags,” to which I didn’t get the joke and proceeded to make a complete fool of myself.

Back to Elton. At the age of 15, with the help of his mother and stepfather, Reginald became a weekend pianist at a nearby pub, the Northwood Hills Hotel, playing Thursday to Sunday nights for £35 a week and tips. Known simply as “Reggie”, he played a range of popular standards, including songs by Jim Reeves and Ray Charles, as well as songs he had written himself.

In 1964, Dwight and his friends formed a band called Bluesology. By the mid-1960s, Bluesology was backing touring American soul and R&B musicians like The Isley Brothers, Major Lance, Billy Stewart, Doris Troy, and Patti LaBelle and The Bluebelles. In 1966, the band became Long John Baldry’s supporting band.

Dwight answered an advertisement in the New Musical Express placed by Ray Williams, then the A&R manager for Liberty Records. At their first meeting, Williams gave Dwight a stack of lyrics written by Bernie Taupin, who had answered the same ad. Dwight wrote music for the lyrics and then mailed it to Taupin, beginning a partnership that still continues to this day. In 1967, what would become the first Elton John/Bernie Taupin song, “Scarecrow”, was recorded. When the two first met, six months later, Dwight was going by the name “Elton John” in homage to Bluesology saxophonist Elton Dean and Long John Baldry.

I’m so pleased Reggie didn’t take his father’s advice and get a day job, and I’m sure the 30+ million people who’ve bought Goodbye Yellow Brick Road would agree. They don’t make Elton Johns anymore; name me one other artist who writes his own music, can look good dressed as Donald Duck, wears oversized pink spectacles, and is still taken seriously. Which is such a shame as the world would be a much happier place if there were more Reggies.