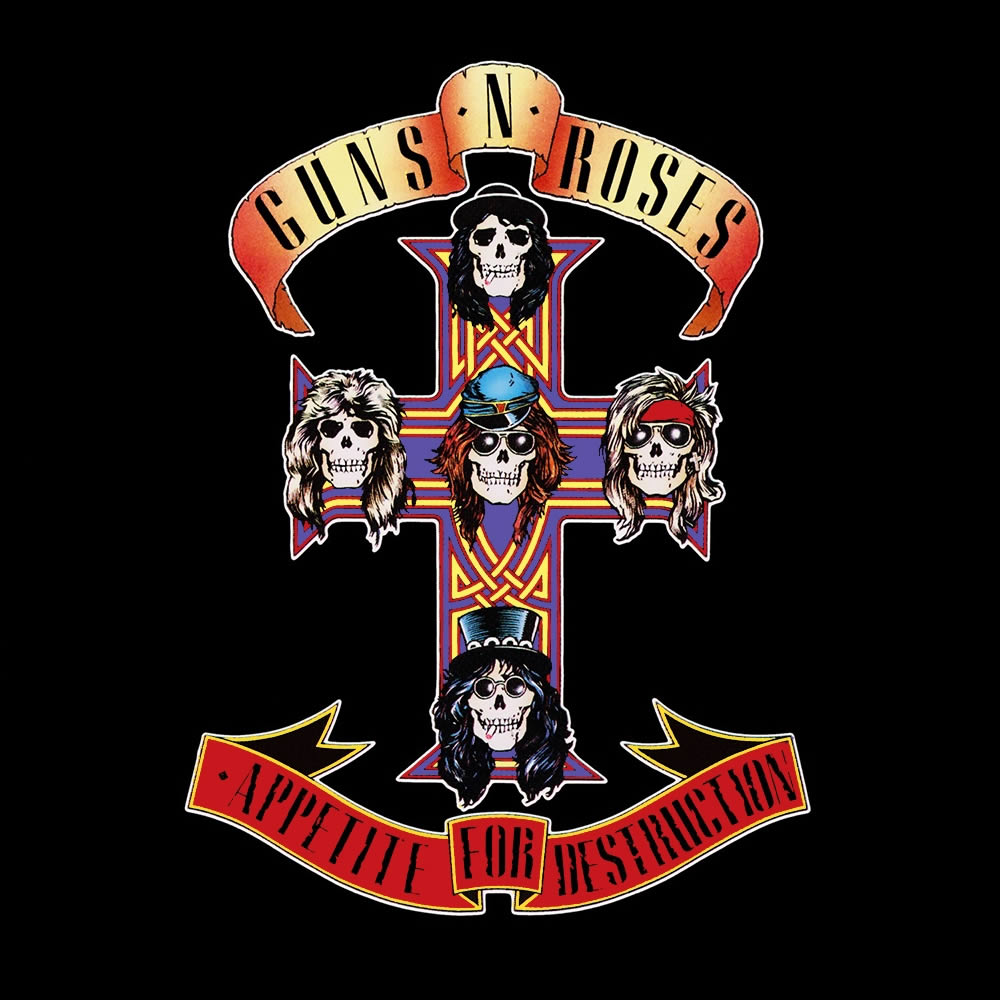 In June 1985, just four days after new guitarist and former Hollywood Rose member Slash had been recruited, Guns N’ Roses left their Los Angeles base to embark on a short, disorganised tour of the US West Coast, from Sacramento, California, to Seattle, Washington. The so-called Hell Tour cemented the band’s first stable lineup, with bassist Duff McKagan later commenting, ‘This trip had set a new benchmark for what we were capable of, what we could and would put ourselves through to achieve our goals as a band.’ Little did the band (Slash, singer Axl Rose, second guitarist Izzy Stradlin, Duff McKagan and drummer Steven Adler) know of how much their worlds were about to change as members of the ‘Most Dangerous Band in the World’.

Between regular LA gigs at the Whisky a Go-Go, The Roxy, and The Troubadour the band started to write songs for what would become their debut album, including ‘Welcome To The Jungle’, ‘Sweet Child O’ Mine’, and ‘Paradise City’. Slash states in his autobiography that Paradise was written in the back of a rental van as they were on their way back from playing a gig in San Francisco, drinking and playing acoustic guitars when he came up with the intro. Duff McKagan and Izzy Stradlin started playing along. Slash started humming a melody when Axl Rose sang, ‘Take me down to the Paradise City.’ Slash chimed in with, ‘Where the girls are fat and have big titties.’

The band entered Rumbo Recorders in January 1987, (yes, the studio owned by Daryl Dragon, from successful 1970s pop duo The Captain & Tennille, who had been nicknamed ‘The Captain’ by Mike Love of the Beach Boys). While Kiss’ Paul Stanley was considered for producing the album, he was rejected after requesting changes to the songs. Engineer Mike Clink was chosen instead to make his debut as a producer, and the group and Clink set about laying down basic tracks.

While the songwriting credits are credited to all five band members, many of the songs began as solo tracks, written by individual band members separately from the band, and completed later. These songs include ‘It’s So Easy’ (Duff McKagan) and ‘Think About You’ (Izzy Stradlin). ‘Rocket Queen’ was an unfinished Slash/McKagan/Adler song that survived from their earlier band Road Crew.

Appetite For Destruction stands as one of the strongest debut albums of all time, history proving that sometimes an initial creative spark and energy can fuse together to deliver a killer debut. Like Led Zeppelin, The Clash, and Jimi Hendrix before them, this debut was as strong as they come. The combination of Rose’s lyrics and screeching vocals, the twin-guitar interplay of Slash and Izzy Stradlin, who rolled out riffs and solos better than any band since the Rolling Stones, made this the best metal record of the late ’80s.

‘Sweet Child O’ Mine’, written about Rose’s girlfriend at the time, Erin Everly, whose father was Don Everly of The Everly Brothers, topped the US charts. The second single from the album, ‘Welcome To The Jungle’, (the first song co-written by Rose and Slash), was named the greatest hard rock song of all time by VH1 in 2009. Clint Eastwood requested to use the song in his film, The Dead Pool, which featured a then-unknown Jim Carrey (known as ‘James Carrey’ at the time), playing the part of a rock star by the name of ‘Johnny Squares’, who appears in the film lip-synching to ‘Welcome To The Jungle’. After the band was asked to be in the film, they can be seen briefly during Johnny Squares’ funeral scene, as well as during the shooting of a film within the film, when Slash, Duff, Izzy, and Steven are seen on a prop boat, with Slash firing a harpoon at a window. The harpoon was later used in the film to kill the antagonist.

In 2011, Axl Rose stated that his original idea for the cover art had been the photo of the Space Shuttle Challenger exploding, as used on the cover of Time Magazine in 1986, but Geffen refused, saying it was in bad taste. The album’s original cover art, based on the Robert Williams painting Appetite For Destruction, depicted a robotic rapist about to be punished by a metal avenger. After several music retailers refused to stock the album, the label compromised and put the controversial cover art inside, replacing it with an image depicting a cross and skulls of the five band members (designed by Billy White Jr., originally as a tattoo), each skull representing one member of the band.

Every once in a great while, an album, which by virtue of its sound and subject matter that was clearly never intended for vast mainstream success, breaks through. Appetite For Destruction became a turning point for hard rock in the late 1980s; a year after its release, this dirty, sleazy, dangerous, record sat atop the US charts for the world to see and has since seen worldwide sales in excess of 28 million.