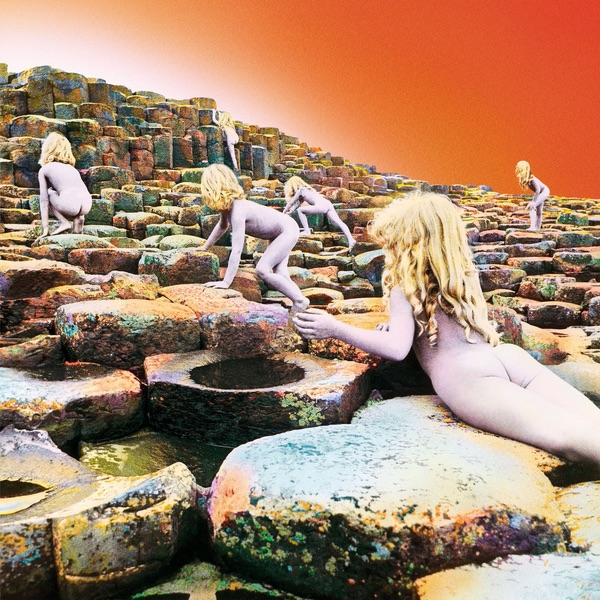 Houses of the Holy was the first Led Zeppelin album not to be titled after the band and the first of the band’s albums to contain no material with a source from outside the band. The album title is a dedication by the band to their fans that appeared at venues they dubbed ‘Houses of the Holy’.

Stylistically the album moved away from the overt electric and acoustic blues influences of the previous four albums. Built on the base of Zeppelin’s rock-solid musicianship, songs variously combined elements of reggae and doo-wop, funk and a cappella, while John Paul Jones was given more space to add keyboard embellishments and string arrangements.

It was recorded in Spring 1972 with the Rolling Stones Mobile Studio, at Stargroves, Mick Jagger’s Berkshire country house, and at Olympic Studios, London; additional sessions were undertaken at Electric Lady Studios in New York.

The album was released in March 1973 with a sleeve design by design team Hipgnosis, who had long provided striking covers for Pink Floyd and others, including ‘Argus’ by Wishbone Ash, the latter apparently the impetus for Jimmy Page to call them. The sleeve was photographed by Aubrey ‘Po’ Powell, who said he had heard lots of interesting things about Led Zeppelin, and was slightly nervous about the prospect of working with them. Powell had a meeting with Jimmy Page, Robert Plant and Peter Grant, whom he found very overpowering, and presented two concepts, which he had prepared without having been able to hear any music or having had a title to work from.

One involved a photo shoot involving recreating the ZoSo logo in the Nazca desert of Peru, while the other was based on the science fiction novel ‘Childhood’s End’ by Arthur C. Clarke. The conclusion of the 1953 book, (which also inspired a Pink Floyd song), involved all the children of the earth clambering towards some special spot, from which to depart for another world. The novel also features a 100-mile high plume of fire, which is echoed in the final cover’s red-orange sky. Having been assured that money was no object, the ‘Childhood’s End’ concept was scheduled to be realised at the otherworldly Giant’s Causeway, a formation of basalt rock columns in Northern Ireland, similar to those in Fingal’s Cave on the Scottish Hebridean island of Staffa, which Robert Plant had initially suggested.

Powell duly set off to Northern Ireland with a crew, makeup artists and two children, Samantha and Stefan Gates, plus their mother. It was early November and when they arrived it rained for ten whole days, rendering a colour shoot impossible, so the sleeve was accordingly shot in black and white. The original idea was for a family to be featured, but after five miserable days Po decided to include only the children. The final images were all taken in one hour on the sixth day and the results composited into a collage of multiple shots of the two Gates siblings. They were originally intended to be gold and silver but Phil Crennell, who hand tinted the shots, gave them a purplish tinge, which added to the otherworldly elements.

The inside cover shot was conceived on the spot at Dunluce Castle near the Giant’s Causeway on the same afternoon, in a shoot notable for the difficulty of its working environment. Jimmy Page and Peter Grant approved the sleeve at Victoria Station on the 18th December, 1973.

Houses Of The Holy is the only Led Zeppelin album to reprint the full lyrics on its inner sleeve packaging, the exception being the fourth album, which referenced Stairway To Heaven only.

Jimmy Page again shows his groundbreaking approach to the electric 12-string guitar on the opening track ‘The Song Remains The Same’ with none of the folky jangle that had been synonymous with the instrument up to then. The song was originally an instrumental, which was given the working title The Overture before Plant added lyrics to it, after which it was temporarily known as The Campaign. This instrumental was planned to segue into ‘The Rain Song’.

George Harrison reportedly inspired ‘The Rain Song’ after a conversation with drummer John Bonham about the length of Zeppelin’s shows. Harrison, a fan, couldn’t believe that Zeppelin performed for 3 hours on stage, reminding Bonham that The Beatles only played for 30 minutes. The opening two chords are similar to those in the first line of George Harrison’s Something, allegedly in tribute to him.

On ‘The Crunge’ Robert Plant pays tribute to James Brown, one of his idols, at the end of the song by asking ‘Has anybody seen the bridge? Where’s that confounded bridge?’ Since most of James Brown’s earlier studio recordings were done live with almost no rehearsal, he often gave directions to the band as they were playing, e.g. ‘Take it to the bridge’ – ie the bridge of the song.

‘The Ocean’ refers to the sea of fans seen from the stage at Led Zeppelin concerts, to whom this song was dedicated. The voice on the intro is drummer John Bonham when announcing: ‘We’ve done four already but now we’re steady, and then they went 1, 2, 3, 4!’ he is referring to the previous takes.

John Paul Jones told Zeppelin annotater Dave Lewis in 1997 that The Ocean was amongst his favourite Zeppelin tracks, along with ‘When The Levee Breaks’, ‘Kashmir’, ‘Over The Hills And Far Away’ and ‘In My Time Of Dying’.

Houses of the Holy originally received mixed reviews, with much criticism from the music press being directed at the off-beat nature of tracks such as ‘The Crunge’ and ‘D’yer Mak’er’. Gordon Fletcher from Rolling Stone called the album “one of the dullest and most confusing albums I’ve heard this year.” In 2012, the album was ranked at number 148 on Rolling Stone’s 500 Greatest Albums of All Time.