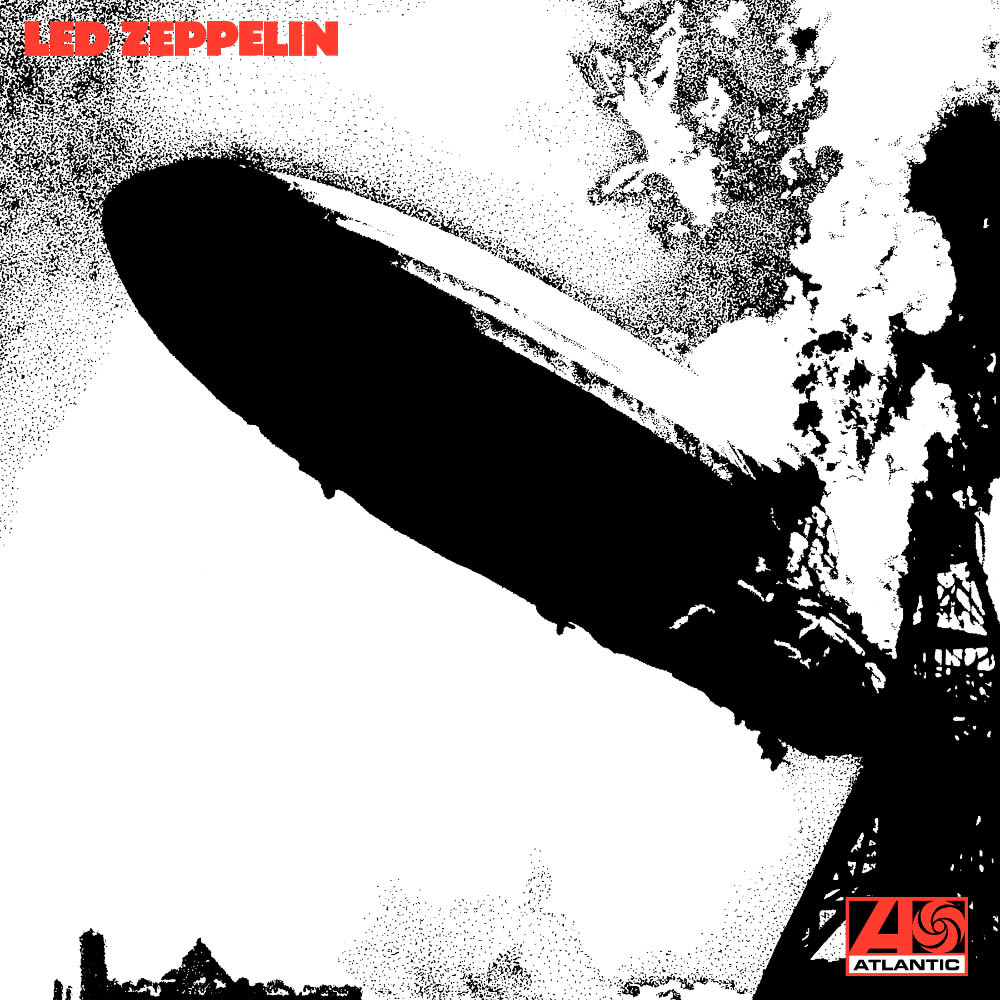 Led Zeppelin I, the band’s debut album, was released in the US, on 12 January 1969, coinciding with the band’s first headlining US concert tour. It was to peak at No.10 on the US chart, and at No.6 in the UK. The RIAA in the US has now certified it as having sold over 10 million copies in the US alone.

Recorded in October 1968 at Olympic Studios in London, the album was released via Atlantic Records on 12 January 1969. In a 1990 interview, Jimmy Page said that the album took only about 36 hours of studio time to create, including mixing, spread over some weeks. The song list was based on the band’s live set, which itself included some numbers that Page had featured in The Yardbirds, reworked with the new entity. The album was produced by Jimmy Page, as would be all future Zeppelin albums, and engineered by Glyn Johns, who worked at Olympic a great deal and was to be associated with many of the biggest artists of all time, including The Rolling Stones, The Who, The Faces, Eric Clapton, and Eagles.

To help publicise the band in America before their debut tour, the band’s manager Peter Grant sent white label advance copies of the album to key FM radio stations. Zeppelin initially played as the support act for bands such as Iron Butterfly and Vanilla Fudge (both of which were also signed to Atlantic Records) and Country Joe & the Fish. However, as the tour progressed, it became apparent that Led Zeppelin was easily outshining the headline acts, continually blowing them off stage!

This 35-date tour saw Zeppelin play in key areas, including four nights at the Whisky a Go Go in Hollywood, another four nights at the Fillmore West in San Francisco, and a four-night run at the Boston Tea Party in Boston as well as shows in Detroit, Denver, Miami, and New York City.

Everything anyone needs to know about Led Zeppelin is apparent in the opening track, “Good Times, Bad Times” — thunderous drums, tight riffing, a wild vocal, and a bluesy guitar solo. The album also featured “Dazed and Confused”, which became a centrepiece for the group during live performances, and was included in the set until 1975. “Dazed and Confused” featured Jimmy Page playing guitar with a violin bow, an idea that supposedly came from leading classical violinist David McCallum, who Page had met playing music sessions.

The album features another classic, “Communication Breakdown”. Led Zeppelin make “Communication Breakdown” sound so easy that it makes the subsequent tsunami of lesser bands specialising in hard rock riffing more understandable. But it’s not just the 2:30 concentrated sonic barrage that makes the recording so classic — it’s the interplay between the group members, the trademark Zeppelin light and shade, the openness of the sound, and Robert Plant’s banshee wail. Page launches an assault with his manic guitar solo, and the whole thing fades out with massed backing vocals chanting the chorus. It simply couldn’t be any better.

The album closes with “How Many More Times”; at eight and a half minutes, it’s the longest song on the album, and comprises various different sections, which Jimmy Page had developed in his time with the Yardbirds.

If you consider that the UK number one singles in the autumn of 1968 included Mary Hopkin and Hugo Montenegro, it gives some idea of the alternative that Zeppelin offered, one that was gratefully received by concert goers. They wouldn’t be hearing much of Zeppelin on UK radio, but the band were to travel the breadth of the country, offering their phenomenally powerful show to anyone prepared to put them on, conquering Britain and the US in short order with drive, excitement, and most of all, musicianship.

Led Zeppelin I initially received negative reviews from the critics, which helped fuel an ongoing distrust of the press and various journalists within the Zeppelin camp. But they needn’t have worried; the fans voted with their hard earned cash. Zeppelin expert Dave Lewis noted that with the possible exception of the 12 hours that The Beatles took to record their first album at Abbey Road, rarely has studio time been used so economically. Led Zeppelin’s debut album went on to gross more than £3.5 million, just short of 2,000 times more than they invested!