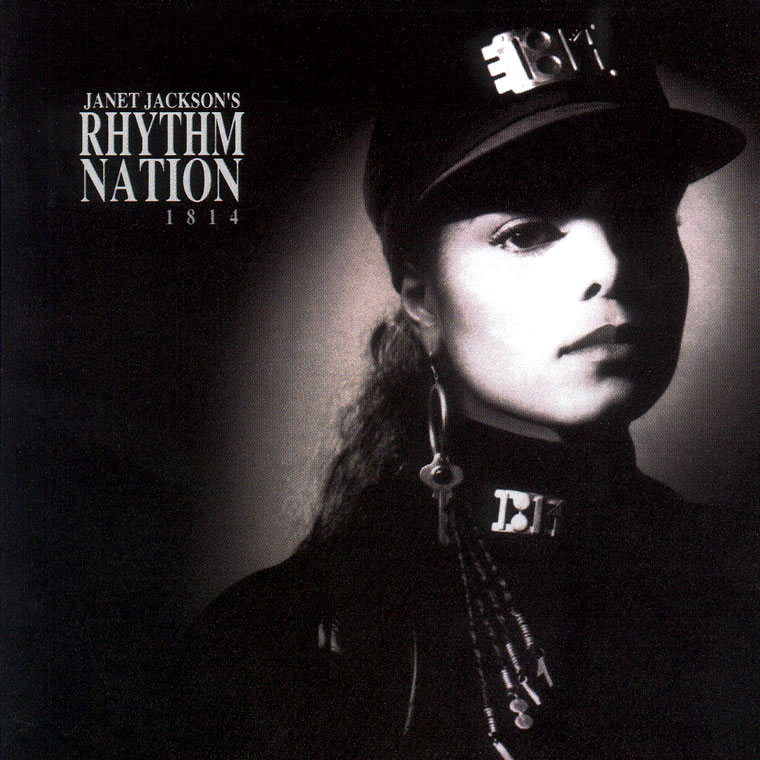 On 28th Oct 1989, Janet Jackson started a four-week run at No.1 on the US album chart with Janet Jackson’s Rhythm Nation 1814, only one of three albums to produce seven top ten US singles (the other two being Thriller by Michael Jackson and Bruce Springsteen’s Born In The USA).

Most act’s dream of having seven top ten singles during their career let alone from one album. And I wouldn?t mind, but out of the other two acts to achieve this feat, talk about keeping it in the family, it’s Janet?s brother Michael.

All three albums were released in the ’80s when the music market was a totally different beast. No computers, no digital downloads, and for the first few years of the decade, no CDs! (The first CDs went on sale in November 1982 and were mainly classical recordings.) So, these were still the days of the public making a visit to their local record store and buying a vinyl single. Oh, the memories!

So what made these three albums so popular at the time and so good that the record companies were in the enviable position to release most of the album as singles? Janet Jackson’s Rhythm Nation 1814 was released at the peak of her career; four of the singles were US No. 1’s: “Miss You Much”, “Escapade”, “Black Cat” and “Love Will Never Do (Without You)”. Both radio and MTV loved Janet. Jackson received nine Grammy nominations for the album, winning Best Music Video, Long Form for “Rhythm Nation” in 1990.

The commercial success of Jackson’s album became part of an important turning point for black women in the recording industry. Prior to the 1980s, black artists were often segregated, being limited to disco, soul, and rhythm and blues charts and radio airplay. As such, one important struggle for black women had been in their ‘crossover’ from dance music to white-dominated pop and rock. While the dominance of female superstars on the mainstream charts had been led by Madonna, artists such as Janet, Tina Turner, and Whitney Houston all reached superstar status with the help of MTV.

So Janet ended the decade as a massive global superstar, something her brother Michael had also achieved in the ’80s. His sixth studio album Thriller had been released on November 30, 1982, as the follow-up to his critically and commercially successful 1979 album Off the Wall. Thriller became and currently remains the best-selling album of all time, with over 100 million copies sold worldwide.

Maybe Michael had was partly responsible for his sister’s success. Thriller enabled Jackson to break down racial barriers via his appearances on MTV and meeting with President Ronald Reagan at the White House. The album was one of the first to use music videos as successful promotional tools – the videos for “Thriller”, “Billie Jean” and “Beat It” all received regular rotation on MTV.

And let’s not forget Bruce. Released in June 1984, Born in the U.S.A. was the best-selling album of 1985 in the United States (and also Springsteen’s most successful album ever). “Dancing in the Dark”, “Cover Me”, “I’m on Fire”, “Glory Days”, “My Hometown” along with “Born in the U.S.A.” all expressed signs of hope in the daily fight of the standard American in following the American Dream. The album had a pop-flavoured, radio-oriented sound that helped Springsteen to extend his popularity and appeal to mainstream audiences.

These were indeed very different times – no iTunes, no X Factor (thank God), no reality TV. Radio was still the dominant force delivering and making hits, backed with the new visual format of the video and the rising popularity of MTV. You heard it, you read about it and you saw the video? and then if you liked it, you parted with your hard-earned cash. No free downloads, no Spotify. Just great music.

Important Dates In The Life Of Janet Jackson: