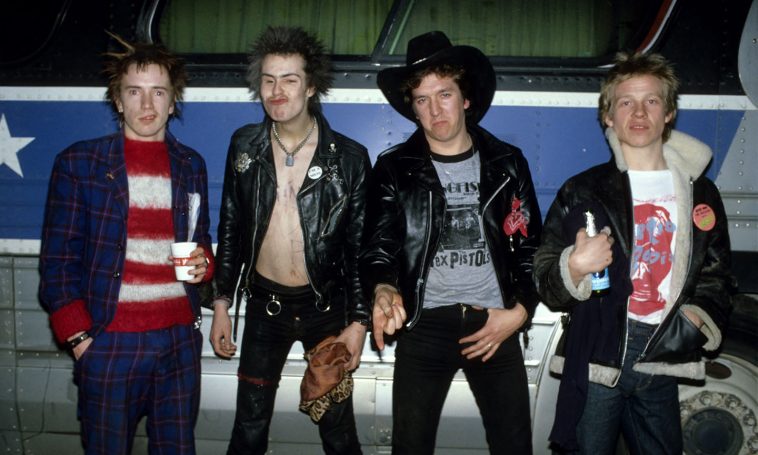 For a group who only released one proper album, the Sex Pistols made one hell of an impact. Their timing was perfect. The media had a field day and couldn’t keep those dirty little punks off the front pages of the papers. The good citizens of the British Isles were feeling patriotic; we were about to celebrate The Silver Jubilee of Elizabeth II marking the 25th anniversary of Queen Elizabeth II’s accession to the throne. But these little buggers came along to ruin the whole thing!

The Sex Pistols made their live debut at St Martin’s School Of Art in central London in November 1975, supporting a band called Bazooka Joe, which included Stuart Goddard (the future Adam Ant). We are told the Pistols’ performance lasted 10 minutes.

On 4 June 1976, the Sex Pistols appeared at The Lesser Free Trade Hall in Manchester, England. The now legendary night is regarded as a catalyst to the punk rock movement. In the audience was: Morrissey, Bernard Sumner, Peter Hook (soon to form Joy Division), and Mark E Smith (The Fall).

Future Smiths singer Steve Morrissey later had a letter published in music magazine Record Mirror and Disc asking the editor why the paper had not included any stories on the Sex Pistols.

In October 1976, Sex Pistols signed to EMI records for £40,000 ($68,000). The contract was terminated three months later with the label stopping production of the “Anarchy In The UK” single and deleting it from its catalogue. EMI later issued a statement saying it felt unable to promote the Sex Pistols’ records in view of the adverse publicity generated over the last few months.

On 1 December the Sex Pistols appeared on ITV’s live early evening Today show (in place of Queen, who had pulled out following a trip to the dentist by Freddie Mercury). Taunted by interviewer Bill Grundy, who asked the band to say something outrageous, guitarist Steve Jones said, “You dirty bastard…you dirty fucker…what a fucking rotter!” This was just what the media wanted! Most of the British public were outraged and once again the Pistols were all over the front of the papers.

On 10 March 1977, at 7am in the morning and on a trestle table set up outside Buckingham Palace, the Sex Pistols signed to A&M Records. The contract lasted for six days. The Pistols were fired from A&M due to pressure from other label artists and its Los Angeles head office. Twenty-five thousand copies of “God Save the Queen” were pressed and the band made £75,000 ($127,500) from the deal.

Knowing that someone had to put this record out, a brave Virgin Records came to the rescue and signed The Sex Pistols. And then at last on 27 May 1977, the Sex Pistols’ single “God Save the Queen” was released in the UK.

It was banned by TV and radio; high street shops and pressing plant workers refused to handle the record. It sold 200,000 copies in one week and peaked at No. 2 on the UK charts behind Rod Stewart‘s “I Don’t Want to Talk About It”. It did, however, reach No. 1 on the NME charts. There have been persistent rumours (never confirmed or denied) that it was actually the biggest-selling single in the UK at the time, and the British Phonographic Industry conspired to keep it off the No. 1 slot.

And just to rub salt into the “Jubilee” wounds, on 15 June the Sex Pistols held a party on a boat as it sailed down the River Thames in London, where they dropped anchor outside Houses of Parliament and performed “Anarchy In The UK” as loud as humanly possible, resulting in members from the party being arrested when the boat docked later that day.