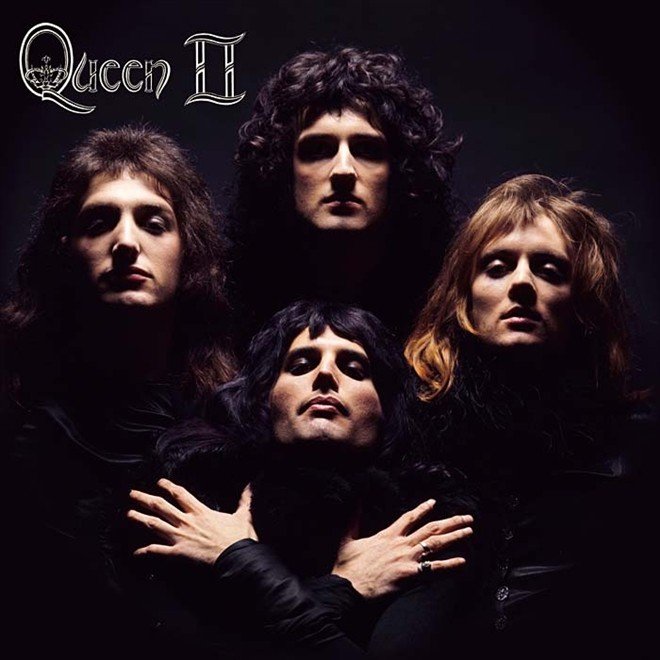 The recording of Queen II was very different from that of Queen’s debut album; they were allocated their own studio time in August of 1973 and, with the luxury of not having to move out periodically to make way for paying customers, made full use of the facilities at Trident Studios, in London, England. As with their first album, the band maintained direct involvement with the production process, developing the multi-tracking techniques they had used eighteen months earlier to create much bigger and more ambitious vocal and guitar effects.

Other ideas to be expanded and refined during the making of Queen II included: reversed passages; ‘orchestral’ guitar effects, using the ‘Deacy amp’, built by electronics wizard John Deacon; and the segueing of tracks to create extended medleys. Despite the complexity and sophistication of Queen II, it was recorded in around a month; a testament to the band’s focus and work-rate. As co-producer Roy Thomas Baker later recalled, “they were relentless”.

Many consider Queen II to be Queen’s true seminal album, although there are strong arguments in favour of each of the two which followed it. Brian May expressed some thoughts on the matter in a 1977 interview for BBC Radio 1 in the UK; “Queen II is an album which in some ways is the root of all that happened thereafter … the precursor of Bohemian Rhapsody in many ways.”

The new album’s presentation and packaging were also afforded more attention than that of its predecessor; based on ideas specified by Queen, it was shipped in a black and white themed gatefold sleeve featuring images of the band, and with an inner-sleeve featuring all the lyrics. The classic cover photograph became the basis for the iconic ensemble vocal sections of the “Bohemian Rhapsody” video. It was taken during the band’s first of many sessions with renowned photographer, Mick Rock.

Despite having worked with the likes of David Bowie, it took more than the his reputation to gain the trust of Queen. He stated in a 2013 interview with BBC Radio 2’s Johnnie Walker in the UK, “Considering they hadn’t moved many records, they were very sure of themselves”. Before the session, they played Mick Rock the new album. He described his reaction: “I said ‘Oh, it’s Ziggy Stardust meets Led Zeppelin‘. And that got Freddie, and then the others, very excited… I was definitely in after that.” As a concept for one of the cover shots he showed them a photograph of Marlene Dietrich, taken by Don English, during a session to produce publicity stills for the 1932 film Shanghai Express. Freddie loved the idea of emulating the Hollywood star’s moodily-lit ‘arms folded across the shoulders’ pose. His band-mates were less enamoured and, according to Mick Rock, were bullied by Freddie into using it. As their photographer put it, “And of course it was the right move”.

Although not a concept album Queen II does have a conceptual structure; side one (titled ‘Side White’), written by Brian May – with the exception of the last track, Roger Taylor’s “The Loser In The End” – concerns itself with positive themes and features the ballad “White Queen (As It Began)”; the flip-side, ‘Side Black’, exclusively featuring Freddie Mercury compositions deals, at least in part, with darker subject matter and includes “The March Of The Black Queen”, Freddie’s antithesis to Brian’s similarly titled ‘Side White’ contribution. Also, a lot of the album’s lyrics are concerned with fantasy themes, although not in any directly connected fashion.

Freddie Mercury will always be remembered as one of the greatest showmen in the history of rock and pop. However, he was first and foremost a brilliant and utterly dedicated musician. This was borne out in his stunning contribution to this album and would continue throughout his career, right to the very end.

All but the last track of ‘Side Black’ are in the form of a glorious medley. Although Nevermore doesn’t actually segue into The March Of The Black Queen, the former does flow into the latter naturally and without a break, maintaining the continuity of this sublime seventeen and a half minutes of music. This was no one-off flash of brilliance however and Queen would replicate the idea with the equally wonderful medley on side one of Sheer Heart Attack in 1974.

Thanks to Phil Chapman.

The album credits included “Virtuoso castanets by Roy Thomas Baker” and the continuing band in-joke, “… and nobody played synthesizer … again”.