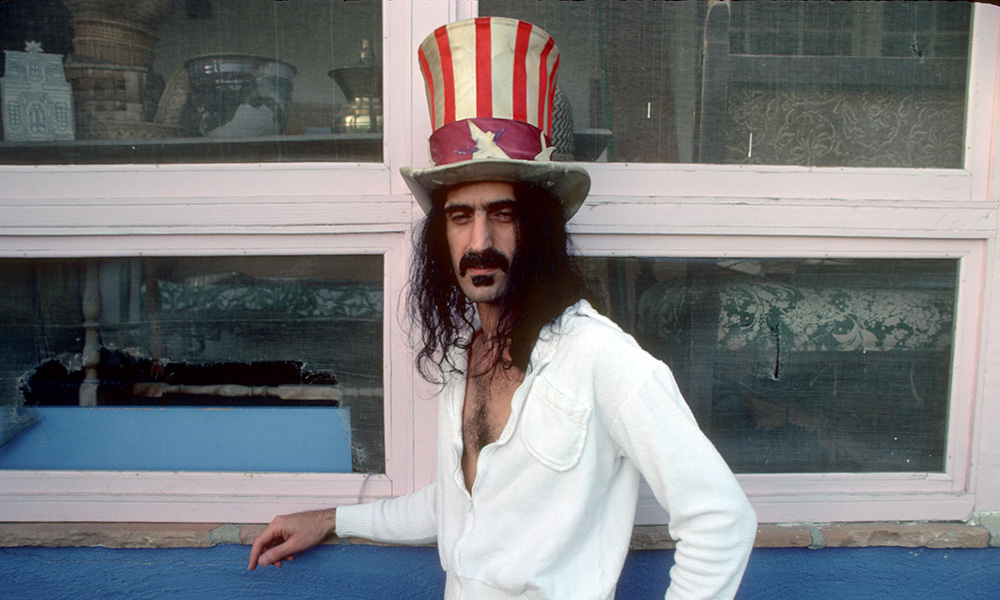 2 In 1968 Zappa appeared on The Monkees TV show dressed as guitarist Mike Nesmith. Later he was shown “playing” a car by repeatedly beating it.

3 Freak Out! released in 1966, is often cited as one of rock music’s first concept albums. The album is a satirical expression of Zappa’s perception of American pop culture.

4 Zappa’s first band was named “The Blackouts”, who renamed themselves a little later to “The Omens”.

6 Zappa’s first recording project after the break-up of the original Mothers of Invention was Hot Rats, released in October 1969. Five of the six songs are instrumental, (“Willie the Pimp” features a short vocal by Captain Beefheart).

7 Zappa produced almost all of the more than 60 albums he released with the band the Mothers of Invention and as a solo artist. Since 1994, the Zappa Family Trust has released 38 posthumous albums, making a total of 100 albums.

8 “Valley Girl” by Frank Zappa and his then 14-year-old daughter, Moon Unit Zappa became his biggest selling single ever, (topping out at No. 32 on the Billboard charts). In her improvised lyrics to the song, Zappa’s daughter satirized the vapid speech of teenage girls from the San Fernando Valley, which popularized many “Valspeak” expressions such as “gag me with a spoon,” “fer sure, fer sure,” “grody” (gross), and “barf out”.

9 Zappa worked for a short period in advertising.

11 Frank had to go to prison for 10 days, aged 18. And also was judged not to get close to a woman aged under 21 without an adult.

12 The groundbreaking Freak Out! album released in 1966, which, after Bob Dylan’s Blonde on Blonde, was the second rock double album ever released.

13 Every year the German town on Bad Doberan hosts the Zappanale where only Frank’s music is performed.

14 The forth album Ruben & the Jets was popular with radio stations, as they believed it to be an unearthed doo-wop album by an unknown band. A band called Ruben and the Jets, named in honor of the album, released their debut album, For Real! in 1973, produced by Zappa.

16 Zappa’s most commercially successful album is the 1974 release, Apostrophe (‘), which features the track “Don’t Eat the Yellow Snow”.

17 Zappa’s son Dweezil was named after his wife’s strangely shaped little toe. Dweezil’s registered birth name was Ian Donald Calvin Euclid Zappa. The hospital at which he was born refused to register him under the name Dweezil, so Frank listed the names of several musician friends.

18In 1986 Frank took part in the TV series Miami Vice. He played a drug dealer, Mario Fuente, who dealt in “weasel dust” in his boat offshore.

19 The Real Frank Zappa Book is an autobiography/memoir by Frank Zappa, co-written by Peter Occhiogrosso, and was published in 1989. Reviewing the book The New York Post said, “This book belongs in every home”.

20 In December 1971 while performing at Casino de Montreux in Switzerland, the Mothers’ equipment was destroyed when a flare set off by an audience member started a fire that burned down the casino. The incident immortalized in Deep Purple’s song “Smoke on the Water”.

22 In 1971, during a Mothers show at the Rainbow Theatre, London, an audience member, pushed Zappa off the stage and into the concrete-floored orchestra pit. The band thought Zappa had been killed, he suffered serious fractures, head trauma and injuries to his back, leg, and neck, as well as a crushed larynx, this accident resulted in an extended period of wheelchair confinement.

23 French filmmaker Claire Denis named her 2001 film Trouble Every Day after the Frank Zappa song of the same name from Freak Out!.

24 “Don’t Eat The Yellow Snow” is a song about a man who dreams that he was an Eskimo named Nanook. His mother warns him “Watch out where the huskies go, and don’t you eat that yellow snow.”

25 In 1990, Frank Zappa was diagnosed with terminal prostate cancer. The disease had been developing unnoticed for ten years and was considered inoperable. Frank Zappa died on December 4, 1993, in his home with his wife and children by his side.

Important Dates In The Life Of Frank Zappa: