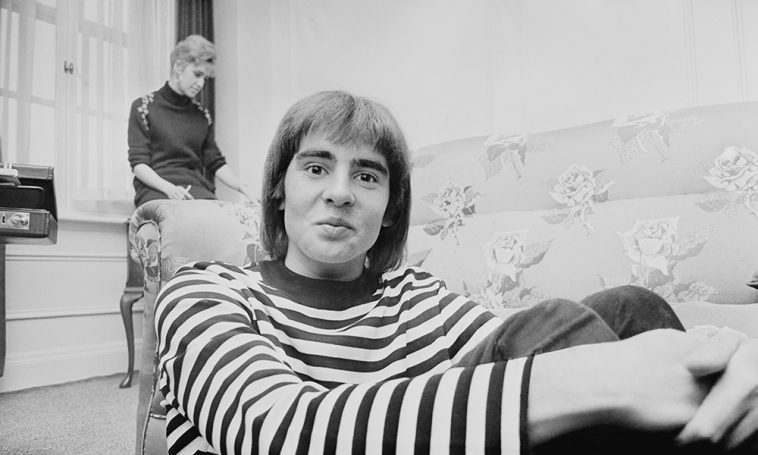 Davy Jones of the Monkees died of an apparent heart attack on 29th February 2012 aged 66. The singer had been on a solo tour this month and had complained of chest pains the previous evening and was admitted to a hospital in Stuart Florida.

Jones was born in Manchester, England and started acting as a child, though he got his big break in 1965 when he joined The Monkees. The group had a hugely successful television series and a slew of hit songs in the late 1960s. At their peak in 1967, they sold more records than the Beatles.

These were the days when the seeds of Pop Idol and X-Factor had yet to germinate in the mind of a five-year-old Simon Fuller.

So, where did these four cheeky, floppy-haired wannabes come from?

Englishman Davy Jones was a former jockey who had achieved some initial success on the musical stage (in 1964, Jones appeared with the cast of Oliver! on The Ed Sullivan Show the night of the Beatles’ live American debut).

Texan Michael Nesmith had served a brief stint in the US Air Force and had also recorded for Colpix under the name Michael Blessing. Nesmith was the only one of The Monkees who had come in based on seeing the trade magazine ad. He showed up to the audition with his laundry.

Micky Dolenz, son of screen actor George M. Dolenz, Sr., had prior screen experience (under the name Mickey Braddock) as the 10-year-old star of the Circus Boy series in the 1950s.

Peter Tork was recommended to producers Bob Rafelson and Bert Schneider by friend Stephen Stills at his own audition. Tork, a skilled multi-instrumentalist, had performed at various Greenwich Village folk clubs before moving west, where he was a dishwasher before becoming a Monkee.

The Monkees story began in 1965, when Bob Rafelson and Bert Schneider, a pair of producers, came up with an idea for a television series about a rock group. Inspired by Richard Lester’s groundbreaking comedies with the Beatles, A Hard Day’s Night and Help!, Rafelson and Schneider imagined a situation comedy in which a four-piece band had wacky adventures every week and occasionally burst into song.

The NBC television network liked the idea, and production began on The Monkees in early 1966. Don Kirshner, a music business veteran, was appointed music coordinator for the series, and Tommy Boyce and Bobby Hart, a producing and songwriting team, signed on to handle much of the day-to-day chores of creating music for the show’s fictive band.

Avant-garde film techniques—such as improvisation, quick cuts, jump cuts—helped win the show two Emmy awards in 1967 and propelled its four stars to pop stardom. John Lennon called them “the Marx Brothers of rock”, but in 1967, The Monkees outsold both the Beatles and the Rolling Stones combined, and went on to sell 50 million records.

The show also saw heavy cross-promotion and product placement, with prominent promotion of sponsors such as Gretsch (for musical instruments), Kellogg’s breakfast cereals, and Yardley’s shaving supplies. The series was sponsored on alternate weeks by Kellogg’s Cereals and Yardley of London.

Each of the four was given a different personality to portray: Dolenz the funny one, Nesmith the smart and serious one, Tork the naive one, and Jones the cute one. Their characters were loosely based on their real selves, with the exception of Tork, who was actually a quiet intellectual. The character types also had much in common with the respective personalities of The Beatles, with Dolenz representing the madcap attitude of John Lennon, Nesmith affecting the deadpan seriousness of George Harrison, Tork depicting the odd-man-out quality of Ringo Starr, and Jones conveying the pin-up appeal of Paul McCartney.

The Monkees resided in a two-story beach house at 1334 North Beechwood Blvd. in Malibu, California. The front of the first floor was a combination of the living room, dining room and kitchen. In the back, overlooking the Pacific Ocean, was an alcove where the Monkees kept their instruments and rehearsed songs. The walls were covered with various signs and posters, such as the “MONEY IS THE ROOT OF ALL EVIL” sign near the kitchen and the “IN CASE OF FIRE, RUN” sign with an arrow pointing to an old-fashioned fire extinguisher near the front door.

The Monkees premiered on NBC in September 1966; this was just the start of The Monkees phenomenon. “Last Train to Clarksville,” the group’s first single, had become a number one hit a few weeks earlier.

The Monkees were the first group to exploit television and have songs written for them by classic Brill Building artists (Neil Diamond, Gerry Goffin and Carole King, Barry Mann and Cynthia Weil, Harry Nilsson, Tommy Boyce and Bobby Hart, and Jeff Barry). And what great tunes they were: “Last Train to Clarksville”, “Daydream Believer”, “A Little Bit Me, a Little Bit You”, “I’m a Believer” and “Pleasant Valley Sunday”.

So what if the Monkees never played on their first two albums and that their 1968 psychedelic film Head was a turkey. And yes, in one of rock’s all-time mismatches, Jimi Hendrix was the wrong choice as the opening act on their 1967 tour. Forget about that. It hasn’t stopped The Monkees’ songs from standing the test of time and becoming classic guitar pop hits