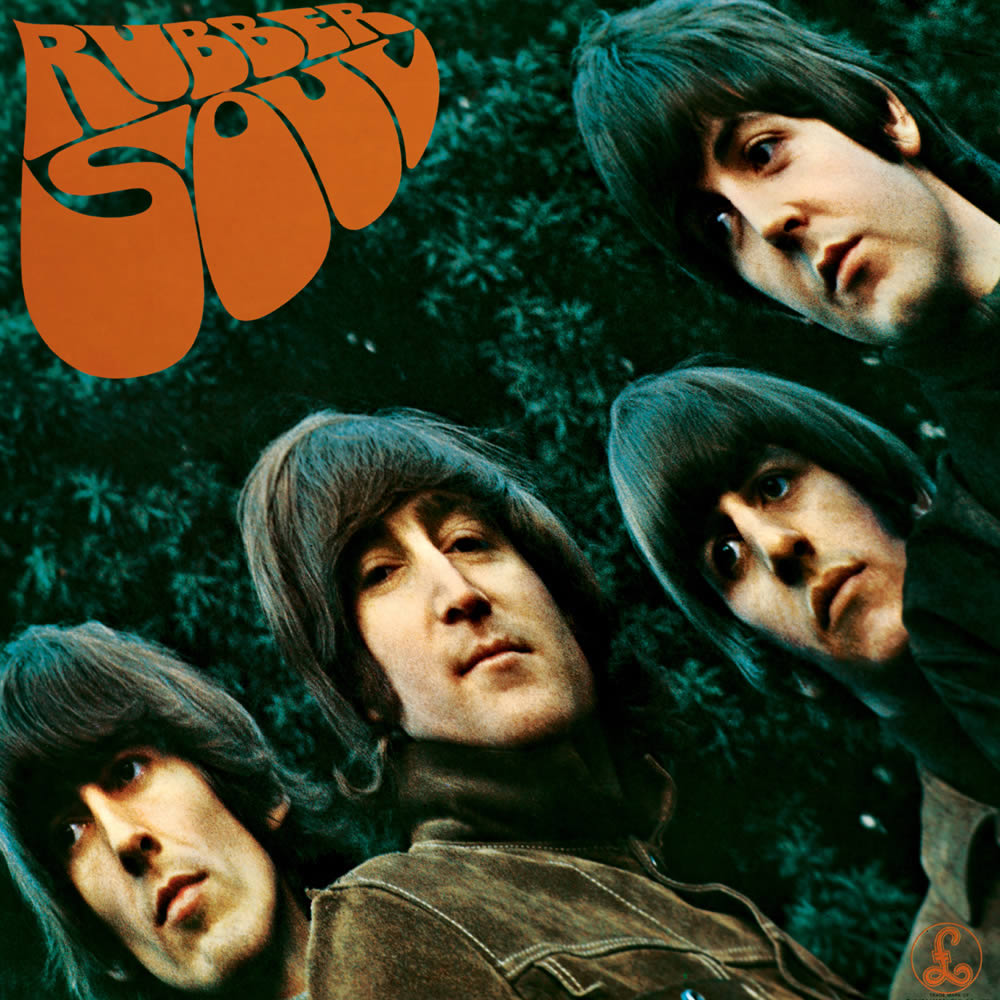 Following a well deserved holiday, John, Paul, George and Ringo returned to the studios in mid October 1965, not only to record their next album but also a new single – their first double A-side “Day Tripper” and “We Can Work It Out. ”

During these sessions, The Beatles took a major artistic leap forward, and when Rubber Soul was released in Dec 65, it presented a new, growing Beatles to the world, with a stunning collection of songs which introduced a new direction, sophistication and depth. Talking about the recording many years later Paul McCartney said, “We smoked a bit of pot, the first time we’d ever done that. We normally didn’t smoke when we were working.”

Rubber Soul was the group’s first release not to feature their name on the cover and the stretched effect of the cover photo came about after photographer Bob Freeman had taken some pictures of the group wearing suede leather jackets at Lennon’s house. Freeman showed the photos by projecting them onto an album-sized piece of cardboard to show how they would appear on an album cover. The unusual Rubber Soul album cover came to be when the slide card fell slightly backwards, elongating the projected image of the photograph and stretching it. Excited by the effect, the boys decided that was how the cover would look. McCartney conceived the album’s title after overhearing a musician’s description of Mick Jagger’s singing style as “plastic soul”.

The album spent 42 weeks on the UK chart and 59 weeks on the US chart, selling over 1.2 million within nine days of its release, and to date has sold over six million copies in America.

Standout tracks on the album include “Drive My Car”, the upbeat opening track, written mainly by McCartney who arrived at Lennon’s Weybridge home for a writing session, with the tune in his head.

According to McCartney, “Drive My Car” was an old blues euphemism for sex. The song’s male narrator is told by a woman that she’s going to be a famous movie star, and she offers him the opportunity to be her chauffeur. When he objects that his “prospects are good”, she retorts that “working for peanuts is all very fine/but I can show you a better time.” reversing the traditional boy-girl roles in The Beatles’ songs, presenting a tale of a wannabe star who wants a man purely as a chauffeur and for sexual services. 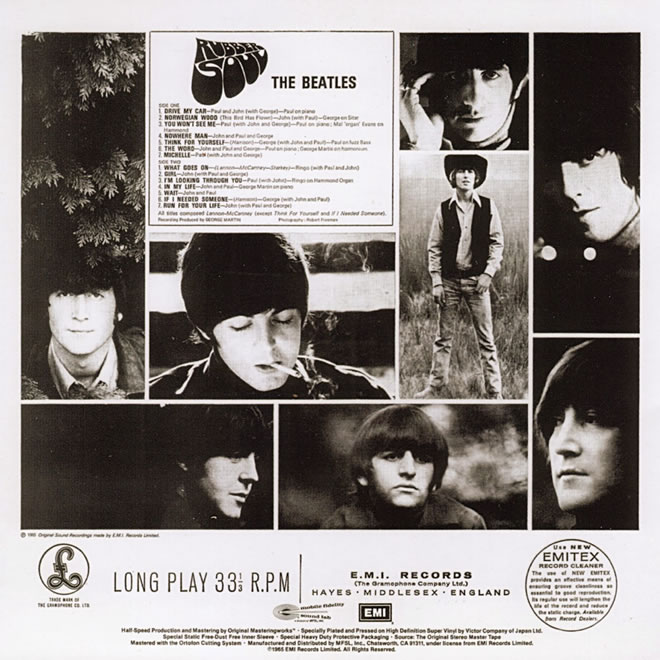 Recorded in one day at Abbey Road studio’s on 13 October 1965, the session saw McCartney and Harrison working closely together on the rhythm track, (McCartney played the lead guitar solo). It became The Beatles’ first recording session to extend past midnight and the song features a McCartney lead vocal with Lennon plus Harrison on backing vocals. McCartney played the lead guitar solo, bass and piano, although Harrison plays the guitar which doubles the bass throughout the song. Over the past few decades the “Beep Beep Beep Beep Yeah!” portion of the song has been used as a jingle by radio stations as they run the traffic reports.

“Drive My Car” also appeared in the US on the Yesterday and Today collection. The upbeat, lighthearted “Drive My Car” was used as the opening track for both albums.

In the following few days after recording “Drive My Car”, The Beatles also laid down “We Can Work It Out”, “Day Tripper” and “In My Life”, all outstanding songs which just prove how prolific the fab’s had become.

Another standout track on Rubber Soul is “Norwegian Wood (This Bird Has Flown)”, which was originally recorded with the working title of “This Bird Has Flown”. This John Lennon song was first recorded in one take and was complete in less than 5 hours of overdubs on 12th October 1965, (the re-make was recorded on 21st Oct in 4 takes).

The track is the first example of a rock band playing the sitar in one of their songs, played by George Harrison who was becoming increasingly influenced by Indian culture and had bought a cheap sitar from an Indian gift shop on Oxford Street in London.

“Norwegian Wood” is credited to Lennon/McCartney, but was written primarily by Lennon, with McCartney contributing to the middle eight section. The song was apparently inspired by Lennon’s extramarital flings. Ironically, he wrote it while he was on a holiday with his wife, Cynthia, at St. Moritz in the Swiss Alps.

Lennon acknowledged being strongly influenced by Bob Dylan during this time period, and it is commonly speculated that Dylan responded with “4th Time Around” on his 1966 Blonde On Blonde album, with a similar melody, subject matter and lyrical delivery. The Norwegian music festival Norwegian Wood, which takes place in Oslo, is named after the song.

Not content with finishing another classic, The Beatles also started work on another new Lennon song “Nowhere Man” on the same day. 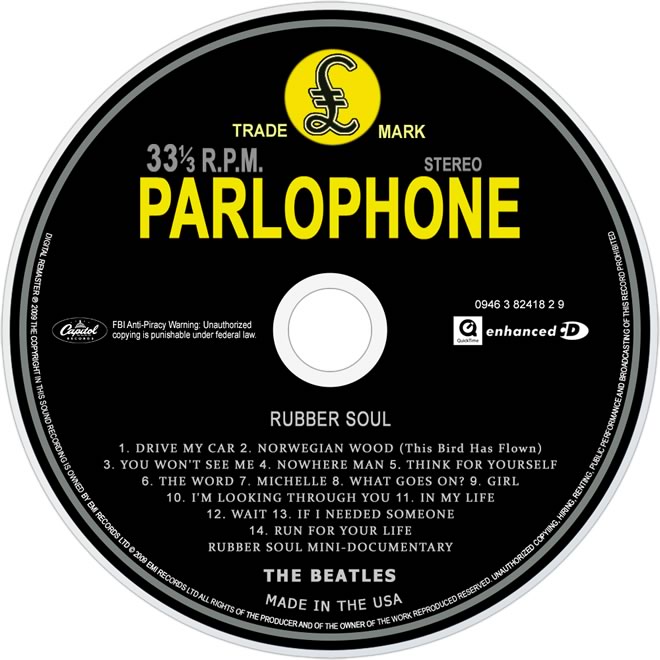 During these sessions The Beatles needed three more songs to complete Rubber Soul and during a 13 hour session at Abbey Road they completed the McCartney song “You Won’t See Me”, (the longest song The Beatles had recorded to that point), and Lennon’s “Girl”.

In 1974, “You Won’t See Me” became a hit for Canadian singer Anne Murray, reaching No. 8 on the Billboard Hot 100 chart. Lennon is said to have told Murray that her version of the song was his favourite Beatles’ cover ever.

“Wait” had already been recorded during the ‘Help!’ sessions which is about a crisis in McCartney’s relationship with his then English actress girlfriend Jane Asher who was the inspiration for many of McCartney’s songs. (Asher was not returning his phone calls at the time of writing the track). The couple dated for almost 5 years and became engaged in 1967.

It’s one of the few songs where McCartney sings lower harmony while Lennon and Harrison sing higher harmony together.

“Nowhere Man” is among the very first Beatles’ songs to be entirely unrelated to romance or love, and marks a notable instance of Lennon’s philosophically-oriented songwriting.

Lennon claimed that he wrote the song about himself and his feelings of isolation in his Weybridge home in Surrey. He wrote it after wracking his brain in desperation for five hours, trying to come up with another song for Rubber Soul. It was released as a single (although not in the United Kingdom) on 15 February 1966, and reached No.1 in Australia and Canada and No.3 in the US.

Rubber Soul was commercially successful, beginning a 42-week run in the British charts on 12 December 1965. The following week it replaced The Sound of Music soundtrack at the top of the charts.

The US version of the album greatly influenced Brian Wilson of the Beach Boys. Wilson believed it was the first time in pop music that the focus had shifted from just making pop singles to making an actual album, without the usual filler tracks. He “answered” the album by releasing Pet Sounds in 1966.