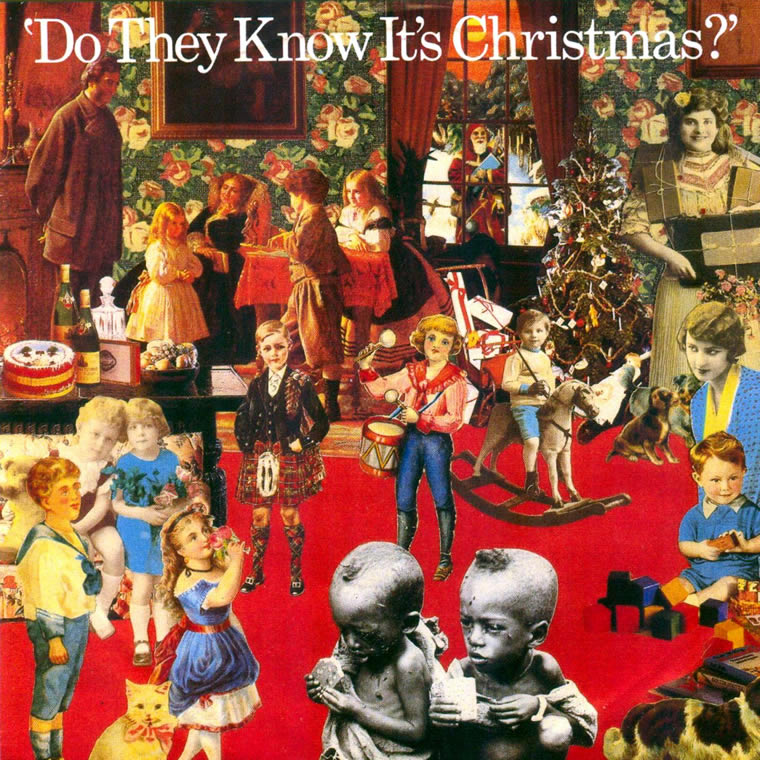 On November 25th 1984, the cream of the British pop world gathered at SARM Studios, London, to record the historic “Do They Know It’s Christmas?” The single, which was written by Bob Geldof and Midge Ure, featured Paul Young, Bono, Boy George, Sting, and George Michael. It went on to sell over three million copies in the UK, becoming the bestselling record ever, and raised over £8 million ($13.6 million) worldwide.

In October 1984, a BBC report by Michael Buerk was aired on British TV highlighting the famine that had hit the people of Ethiopia. Boomtown Rats singer Bob Geldof saw the report and wanted to raise money. He called his friend Midge Ure from Ultravox and together they quickly co-wrote the song, “Do They Know It’s Christmas?” The original version was produced by Midge Ure and released by Band Aid on 29 November 1984.

Geldof asked producer (and Buggles member) Trevor Horn to produce the song, but he was unavailable. Instead, Horn gave the use of his studio, SARM West in London, free of charge to the project for 24 hours, and Geldof put Ure in charge of production duties.

The song has since been covered many times and has continued to raise money, which is great, but no one could ever repeat the buzz, the excitement and feel of this original version. Pop stars who had previously never met checked their egos at the door and got down to business – and recorded a piece of pop music history.

The world’s media were in attendance (as is shown in the video) as artists began arriving from 9am. Duran Duran, George Michael, Sting, Spandau Ballet, Bono and Adam Clayton of U2, Paul Young, Culture Club, Phil Collins of Genesis, Paul Weller, Francis Rossi and Rick Parfitt of Status Quo, Bananarama, and some of Geldof’s band mates from the Boomtown Rats.

Some artists had to make a bit of an effort to attend. Boy George was forced to leave his bed early and take a flight from New York to London to record his lines.

So how did they organize such a star-studded session? Producer Midge Ure played the backing track and guide vocals to the singers, then decided, in a way of getting all involved straightaway, to record the crescendo first, which also allowed the ‘team shot’ of the day to be photographed. The artists were put in a huge group and sang the ‘feed the world, let them know it’s Christmas time’ refrain over and over again until it was completed.

Then Ure asked for a volunteer to be first into the studio to sing the main body of the song. Tony Hadley of Spandau Ballet took the plunge, with plenty of rival artists watching him, and sang the song straight through. Then other singers then did the same – with Ure taping their efforts and then making notes as to which bits would be cut into the final recording. Despite having already recorded his vocal at Ure’s house, Duran Duran singer Simon Le Bon re-recorded his parts so he could be part of the moment. Sting also recorded the words again, this time to provide harmony.

Phil Collins arrived with his entire drum kit and recorded his parts over an electronic drum track that had already been put in place. Boy George arrived late in the afternoon from the airport and went straight into the recording booth to deliver his lines.

Ure worked on the mix through the night and finally completed the task at 8am on the Monday morning. Prior to departing SARM, Geldof recorded a statement: “This record was recorded on the 25th of November 1984. It’s now 8am on the 26th. We’ve been here 24 hours and I think it’s time we went home.”

The song was quickly dispatched to the pressing plants who had promised to have the single pressed and ready by the Tuesday. “Do They Know It’s Christmas?” hit the shops on Thursday 29 November in a sleeve designed by Peter Blake (who designed the Beatles’ Sgt Pepper sleeve), and the track went straight to the top of the charts.

Geldof’s life was never to be the same again. The Irish singer threw himself into the project, becoming the front person and voice and driving force behind Live Aid. Not only was he responsible for making the biggest selling charity single ever, he was about to stage the largest worldwide concert ever seen.