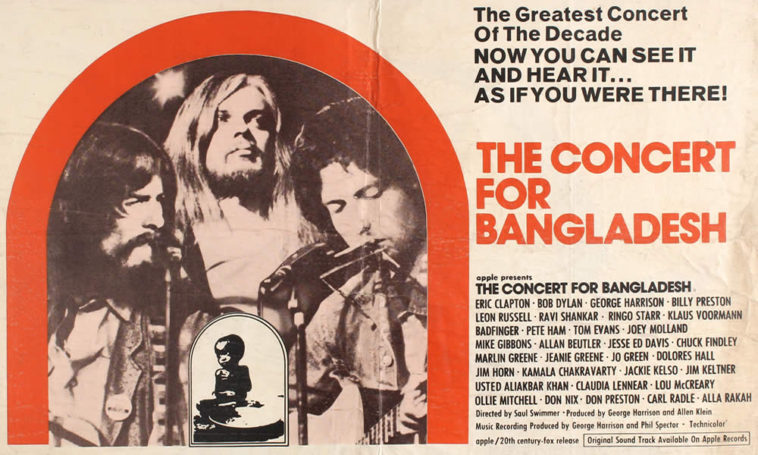 On 1st August 1971, the Concert For Bangladesh, organized by George Harrison to aid victims of famine and war in Bangladesh, took place at New York’s Madison Square Garden. The two concerts, one afternoon and one evening, played to over 40,000 people and featured the all-star cast of Bob Dylan, Ringo Starr, Leon Russell, Billy Preston, Eric Clapton, Ravi Shankar, Klaus Voorman, and Badfinger.

Harrison was well ahead of his time, organizing a large scale charity event with the aid of his musician mates, almost 15 years prior to Live Aid.

His original plan was to recruit his former bandmates, which would’ve turned this into a Beatles reunion, seeing the four on stage together in the US for the first time since 1966. But that was never going to happen.

John Lennon agreed to take part in the concert, however Harrison stipulated that Lennon’s wife Yoko could not perform with him. Lennon agreed, but left New York two days before the event following an argument with Ono regarding his and Harrison’s agreement, so that was the end of that.

Paul McCartney declined because of bad feelings caused by The Beatles’ legal problems on their breakup. McCartney told Rolling Stone years later, “George came up and asked if I wanted to play Bangladesh and I thought, blimey, what’s the point? We’re just broken up and we’re joining up again? It just seemed a bit crazy”. Ringo Starr did, however, appear.

At the press launch for the event, the former Beatle was asked by a reporter, “Why Bangladesh?” Harrison replied, “Because I was asked by a friend if I would help, you know, that’s all”. His friend was Indian musician Ravi Shankar (who surprised us all a few years back when we discovered he was the father of the very talented Norah Jones).

After Shankar had opened the proceedings, Harrison took to the stage with his guests – Eric Clapton on guitar, Ringo on drums, Leon Russell on keyboards, and the guys from Badfinger on guitars and vocals (Badfinger’s Peter Ham did a duet with Harrison on “Here Comes the Sun“). After pleasing the crowd with a selection of his hits, including a few Beatles songs, Harrison casually announced his next guest. “I’d like to bring on a friend of us all, Mr Bob Dylan”.

This was a reclusive time for Dylan – and the first proper live show since his Isle of Wight appearance in 1969. Dylan didn’t disappoint, performing “Blowin’ In The Wind”, “Mr. Tambourine Man”, and “Just Like A Woman” backed by Harrison and his all-star band.

Harrison had to shell out his own money to maintain the fund after legal problems froze all proceeds. The triple album release (the second in a row by Harrison) hit No.1 in the UK and No.2 in the US and received the Grammy award for Album of the Year.

The concert raised $243,418.50, which was given to UNICEF to administer. However, there were complaints about the high price of the album and allegations that there were delays in money from the album sales being sent to help the Bangladeshi refugees. Allen Klein, then an executive at Apple Corps, insisted the company made no money from the album or film and was only recovering its advertising and production costs.

The Los Angeles Times reported that by 1985 nearly $12 million had been sent to Bangladesh for relief. However, the money was tied up in an Internal Revenue Service escrow account for 11 years because the concert organizers had not applied for tax-exempt status. Sales of the DVDs and CDs of the concert continue to benefit the George Harrison Fund for UNICEF.

It was the crowning event of Harrison’s public life, a gesture of great goodwill that captured the moment in history. I read that after the concerts Harrison and Dylan headed back up to Woodstock to Bob’s house, where the two hung out for a few days. Wouldn’t you have just loved to share that journey with them? I bet George and Bob were pretty damn pleased with themselves.