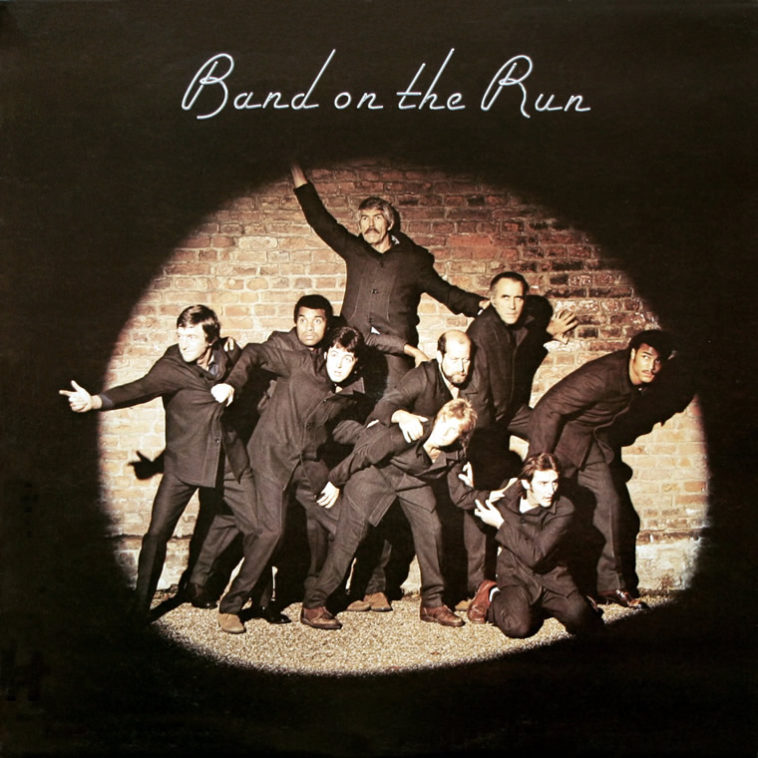 On 8th June in 1974, Wings started a seven-week run at No.1 on the UK album chart with Band On The Run. The album went on to become one of McCartney’s best sellers spending 124 weeks on the UK chart.

But on the run-up to and during recording – McCartney and his band were well and truly ‘on the run’.

The former Beatle was on a roll, his last album Red Rose Speedway had topped the U.S. charts and at last, after a shaky post Beatle start, the future looked good for McCartney and his new group Wings.

Armed with a batch of new songs written at his farm in Scotland, Paul contacted EMI to book the familiar surroundings of Abbey Road studios – only to be informed they were fully booked for the time McCartney had requested. He asked EMI to send him a list of their international recording studios, resulting in the singer choosing between Rio de Janeiro and Lagos in Nigeria. Paul and Linda fancied a few weeks in Africa, so Lagos it was. The singer later stated the idea of lying on the beach all day and recording in the evening seemed like a great way to make a new album.

Then the problems started.

In late August 73, five days before departing for Africa – Wings’ guitarist Henry McCullough phoned Paul to announce he was quitting the group. Not so much of a problem as Paul can handle a few licks himself. But worst news was yet to come – on the day they were leaving and just three hours before the plane was due to take off – drummer Denny Seiwell also quit the band.

This left just the core of the band – Paul, Linda and Denny Laine – to venture to Lagos, along with former Beatles engineer Geoff Emerick.

Upon arriving in Lagos, the band discovered a country, which was run by a military government, with corruption and disease running rampant. The studio, in the dangerous suburb of Apapa, was ramshackle and under-equipped. The control desk was faulty and there was only one tape machine. Un-deterred the trio started the sessions, working from late afternoons into the night. Paul would play the drums and lead guitar parts with Denny playing rhythm guitar and Linda adding keyboards.

Just as they thought nothing else could go wrong – taking a late night walk, Paul and Linda were robbed at knifepoint. The assailants made away with all of their valuables and stole a bag containing a notebook full of handwritten lyrics and songs, and cassettes containing demos for songs to be recorded. They were lucky not to be physically attacked.

A few nights later as McCartney was laying down a vocal track he began gasping for air. Feeling unwell, he went outside for some fresh air – but once he was exposed to the blazing heat he fainted and collapsed to the ground. He was rushed to see a doctor – who informed Paul he had suffered a bronchial spasm brought on by too much smoking.

McCartney recovered and the sessions were completed over the following weeks. When released Band on the Run was met with glowing reviews and saw the album gradually inching its way up the charts. By the spring of 1974, bolstered by the hits “Helen Wheels”, (named after the McCartney’s Land Rover, which they nicknamed “Hell on Wheels”), “Jet” and the title track “Band on the Run”, it reached #1 in the U.S. on three separate occasions.

Band On The Run contains some of McCartney’s best solo efforts. So let’s finish on a lighter note.

More recently Paul told the tale of how he came to write the song “Picasso’s Last Words (Drink to Me)”. Paul and Linda were holidaying in Montego Bay, Jamaica where he met Dustin Hoffman and Steve McQueen who were working on the film Papillon. After a dinner with Hoffman, with McCartney playing around on guitar, Hoffmann didn’t believe that McCartney could write a song “about anything”, so Hoffman pulled out a magazine where they saw the story of the death of Pablo Picasso and his famous last words, “Drink to me, drink to my health. You know I can’t drink anymore.” Paul rose to the challenge and wrote the song on the spot.