Plenty of acts carve a career from one hit, maybe two, and there’s nothing wrong with that. It’s bloody hard to write a number 1 hit! These four young men from the North West of England wrote more hits than anyone. In just four years, they’d scored nine number 1’s, in the UK, this one became their tenth. And the B-Side was a cracker as well.

The Beatles were on their way to hitting their creative peak, tired of touring, the same routine, with each concert not being heard over the roar of screaming fans. John Lennon’s Jesus remarks had also made for more problems with death threats against the group. In less than two months, The Fab Four would make their final stage performance at Candlestick Park San Francisco, California.

On this day 23 June 1966, The Beatles had their tenth consecutive UK number 1 single with “Paperback Writer/Rain”.

It’s another classic Beatles single, written by Paul McCartney (John Lennon had written the previous five number 1’s), and was recorded in just two days during April of that year.

The track is marked by the boosted bass guitar sound throughout, partly in response to John Lennon demanding to know why the bass on a certain Wilson Pickett and Otis Redding recordings far exceeded the bass on any Beatles records. To get the loud bass sound, Paul played a different bass, a Rickenbacker instead of his old trusty Hofner which had featured on the majority of Beatles recordings so far. It was also cut louder than any other Beatles record, due to a new piece of equipment used in the mastering process. 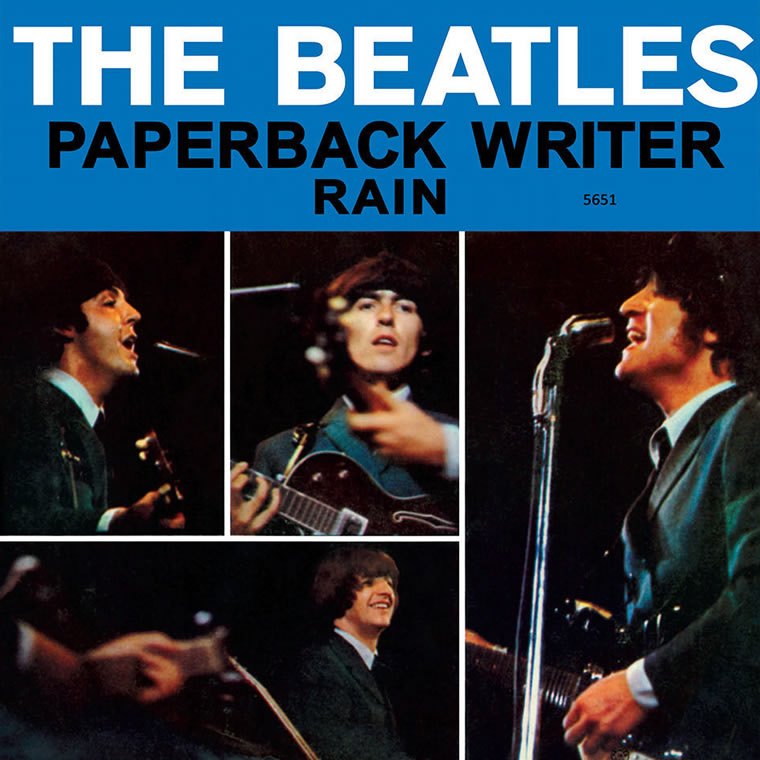 In a 2007 interview, McCartney recalled that he wrote the song after reading in the Daily Mail (Lennon’s daily read), about an aspiring author. The song’s lyrics are in the form of a letter from an aspiring author addressed to a publisher. The author badly needs a job and has written a paperback version of a book by a “man named Lear”. This is a reference to the Victorian painter Edward Lear, who wrote nonsense poems and songs of which Lennon was very fond (though Lear never wrote novels).

Earlier in the year, photographer Robert Whitaker had taken a series of pictures of the group dressed in butcher smocks and draped with pieces of meat and body parts from plastic baby dolls. The group played along as they were tired of the usual photo shoots and the concept was compatible with their own “black humour”.

The Beatles had submitted photographs from the session for their promotional materials resulting in a photograph of the band smiling amid the mock carnage being used as promotional advertisements for the British release of the “Paperback Writer”.

This photograph was also originally used as the cover for the Capitol U.S.only album Yesterday and Today. The image was soon replaced with a normal picture of the band as it had caused great controversy in America.

The airwaves were filled with the sound of The Beatles again and “Paperback Writer” became a worldwide number 1. The Fab Four played those final shows and retreated to the comfort of the studio, to start work on what would become Sgt. Peppers.