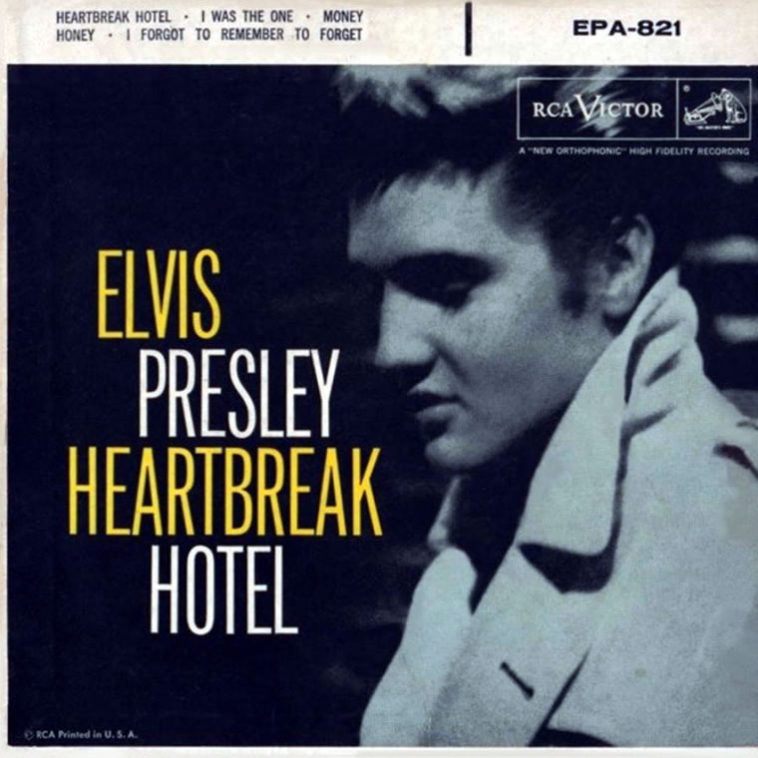 On 10 January 1956, Elvis Presley made his first recordings for RCA Records at The Methodist Television, Radio and TV Studios, 1525 McGavock Street, Nashville. “Heartbreak Hotel” was one of the songs recorded during this session, which was released as a single just 17 days later.

I’ve often wondered how one feels, as a musician, when a song you’ve played on becomes a timeless classic. It must be very rewarding. Because, let’s face it, when you learn to play a new song, you will work out your bit to the best of your ability, then lay down the track. At that point you’ll have no idea how the song is going be received. “Heartbreak Hotel” is a great example of that. Every part of that song is integral — from Presley’s’ opening vocal, to Bill Black’s descending bass line, the drifting piano, the guitar solo by Chet Atkins, all turn the song into the tune we love.

Presley had first performed “Heartbreak Hotel” during a live show in December 1955 during a tour of the Louisiana Hayride, but the song gained strong popularity after his appearance on Stage Show in March 1956. It became a staple of Presley’s repertoire in live appearances, last performed by him on May 29, 1977 at the Civic Center in Baltimore, Maryland.

Recording at RCA was a different experience for Presley and his band, who were used to the more relaxed atmosphere at Sun Studio. Producer Steve Sholes discovered a problem while recording Presley. He noticed that Presley’s voice and guitar were not always being picked up by the microphone. Presley explained to Sholes that he had to “jump around to sing it right.” Sholes then arranged for the whole studio to be re-miked so that Presley’s voice and guitar could be picked up from anywhere in the studio, and recording continued. Also following a suggestion from Presley, Scholes used a hallway at the studio to get an unusual echo for the single.

Durden and Axton got the idea for the song after reading a newspaper story about a man who had cut the labels off his clothing and destroyed all documents that could identify him, then left a one-line suicide note. Axton stated that everyone has someone who cares, and when those who love him learn of his death, they’ll be broken-hearted, so she came up the idea of putting a “Heartbreak Hotel” at the end of that lonely street.

A few months after the song was completed, Mae Axton attended a disc jockey convention in Nashville with “Heartbreak Hotel” on her tape player. She bumped into Elvis and Bob Neal (Presley’s manager at the time) in the lobby of a hotel. She invited the pair up to her room to hear her new song. Elvis loved the dark, brooding song and immediately made plans to record it.

Mae Axton, who became known as the Queen Mother of Nashville, wrote over 200 songs, 14 of which made the US charts. She also claimed to have introduced Elvis to his future manager Colonel Tom Parker, shaping the history of music as we know it today.