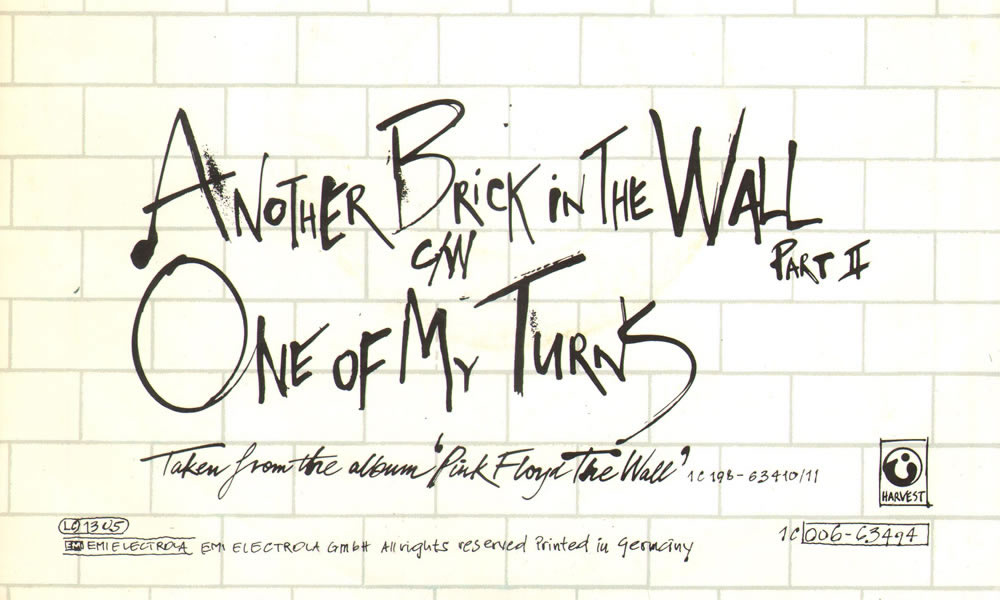 In 1980, Pink Floyd’s “Another Brick In The Wall, (Part 2)” started a four week run at No.1 on the US singles chart. The song received a Grammy nomination for Best Performance by a Rock Duo or Group, but Floyd lost to Bob Seger’s “Against the Wind.”

It topped the US singles chart for four weeks from March 22, 1980, and was number 1 in Canada, Israel, New Zealand, Norway, Portugal, and West Germany, reaching the Top 5 in a further eight countries. It also hit number 1 in South Africa, after which it was banned, on May 6, 1980, when black school children used it to condemn educational apartheid in Soweto.

Co-producer Bob Ezrin had suggested “Another Brick In The Wall, Part 2” as a single with a 4/4 beat, but since the song has just one repeated verse, engineer Nick Griffiths, at Pink Floyd’s Britannia Row Studios in London, was asked to find some children to add colour to the second verse. In a 2009 interview with Guitar World, Ezrin explained that, having produced “School’s Out” with Alice Cooper, he “had a thing about kids on record.”

Griffiths accordingly contacted Alun Renshaw, Head of Music at Islington Green School, who provided the schoolkids. According to Nick Mason, Griffiths was asked originally just to provide two or three kids singing in “a rather pathetic voice.” Griffiths was a fan of Todd Rundgren, who had, on his double album Todd, recorded a live audience singing one of his song’s choruses in New York, and then taken the tape and overdubbed another whole audience singing the harmony in San Francisco. The song was “Sons Of 1984,” which dovetails rather neatly into the Wall album’s themes. At any rate, Griffiths was allowed to record a much larger group of schoolkids, which he did, in the 40 minutes he was allotted by the school.

David Gilmour plays the solo on a vintage 1955 Gibson Les Paul Gold Top guitar, originally played directly through the mixing desk, and the recording subsequently played back through an amplifier in the studio, to be re-recorded with more ambience. The solo is given extra weight and tension by the contrasting and changing chords of the keyboards underneath the guitar.

David Gilmour’s guitar solo, without any of his trademark tremolo or distortion, is a masterpiece of rhythmic precision, a fluid exposition of surefooted interlinked riffing, virtually a masterclass in how to play a solo – and it was the first take.

“Another Brick in the Wall, Part 2” is one of three Pink Floyd songs included in The Rock and Roll Hall of Fame’s list of 500 Songs that Shaped Rock and Roll, curated by Jim Henke. The others are “See Emily Play” and “Money.”
Don’t you just love it when a song like this travels the world and affects peoples lives, makes people think about change, makes people realize they can do better, or try and improve their life for good? This had to be a good thing.