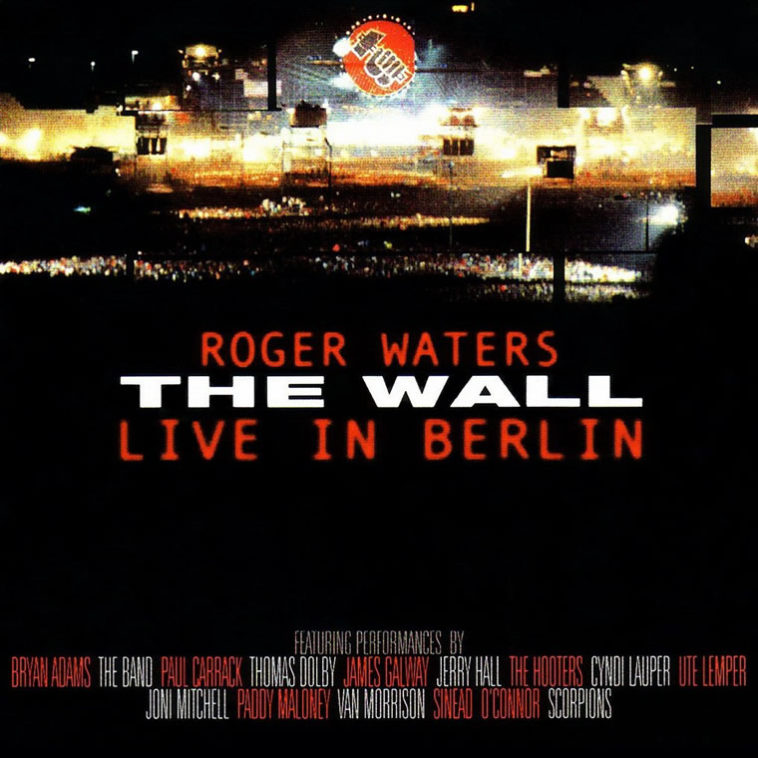 On July 21st 1990, Roger Waters’ The Wall took place in Potzdamer Platz, Berlin at the site of Berlin Wall, which had been torn down only 8 months previously. Over 350,000 people attended the event which was also broadcast live to fifty-two countries throughout the world.

Nobody had really expected the Berlin Wall to come down in 1989, and the speed with which it did so caught many by surprise. Roger Waters had once made a promise never to perform The Wall again after the 1981 tour until the bricks fell in Berlin, so when they did, he had the opportunity to make good on his promise. The Wall became a star-studded megaconcert to benefit the Memorial Fund for Disaster Relief, started by World War II bomber pilot Group Captain Leonard Cheshire, a holder of the Victoria Cross and latterly a tireless worker for charity.

This had resonance for Roger Waters, since his father, a former conscientious objector who then volunteered for the front ranks in World War II, and was killed at the Anzio beach-head in Southern Italy in 1944, when Roger was only 5 months old.

The Wall album, meanwhile, is possibly the most successful rock album concept of all time, and its stage presentation one of the most forward-looking and influential. The album tells the story of the protagonist Pink, often in flashback, and the dramatic concept is the ‘wall’ he erects to isolate himself from the world and its eventual demolition. Created by Roger Waters, the story is semi-autobiographical, dealing as it does with a central figure whose father died in World War II and who is a touring rock star. However many of the events and figures are overstated for effect and not intended to directly reflect Waters’ own family or experiences.

The double album, released in December 1979, was an instant hit, propelled by the worldwide Number 1 single ‘Another Brick In The Wall Part 2’. It remains hugely popular, and is still the third largest grossing album in the US, behind Thriller and Eagles’ Greatest Hits.

It was the stage show, though, which helped to create the legend of The Wall. A monumental production, presented only in Los Angeles, New York and London in 1980, and then restaged in 1981 for the purposes of filming in only London, and Dortmund, West Germany, the show started with a wall half built across the entire stage, and ended the first half with the performers completely isolated from the audience. Some creative tableaux saw songs performed within, in front of, and in the case of Comfortably Numb, on top of the wall, before at the show’s climax the entire edifice was brought crashing down in an avalanche of cardboard bricks. Anyone lucky enough to have seen the original production said that it was the best rock concert they had ever seen.

So it was a second chance to stage the production with larger bricks, bigger inflatable puppets, and a larger audience than any of the original Pink Floyd shows, plus a worldwide TV audience, that prompted the 1990 show. A sell-out crowd of over 250,000 people attended, joined just before the performance by a further 100,000 spectators when the gates were opened. The massive 550 foot (170 metre) long and 82 foot (25 metre) high wall was built in close to the Brandenburg Gate, right on Potsdamer Platz, the no man’s land between East and West Germany, and the production team didn’t know if the area might still be riddled with mines. In fact no-one did, so before setting up they did a sweep of the area and found a cache of munitions and a previously unknown SS regiment bunker.

Available on VHS at the time, the concert was reissued on DVD in 2006 – check it out, and in particular the performance of someone who has plainly not forgotten the occasion: Van Morrison. Perhaps a surprising choice of guest, Van nonetheless turned in a fantastic version of Comfortably Numb. Returning to it recently, Van has included it in his live sets, and allowed its use in Martin Scorsese’s The Departed, so for Van, as for all of us, the answer to the question “Is There Anybody Out There?” is: