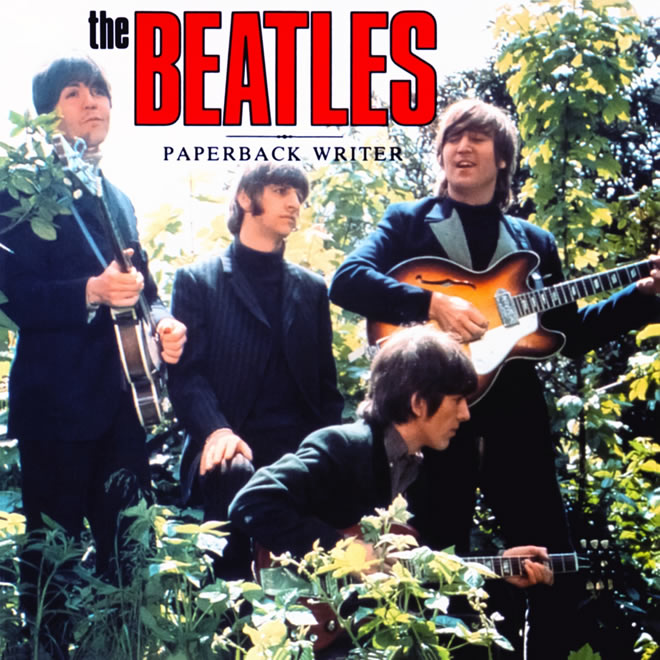 With a non-stop work schedule The Beatles took advantage of promotional films and TV appearances to help promote their latest releases. TV companies around the world would pay good money to broadcast these clips while the cost of the production itself for the group was relatively inexpensive.

“Help!” the title song for the 1965 film and its soundtrack album was released as a single in July 1965. The Beatles made this second promotional clip on 23 November 1965 for inclusion in the year-end recap special of Top of the Pops. Directed by Joseph McGrath, the black-and-white clip shows the group miming to the John Lennon song while sitting astride a workbench. Ringo Starr holds an umbrella overhead throughout the song, which becomes useful as fake snow falls during the final verse.

Michael Lindsay-Hogg directed four promotional films for “Paperback Writer” including this colour film shot at Chiswick House in West London, England on 20 May 1966, where The Beatles mimed to the song. The clip was first broadcast in black and white on BBC-TV’s Top of the Pops on 2 June 1966. “Paperback Writer” was the last new song by The Beatles to be featured on their final tour in 1966.

Three different music videos of the Paul McCartney song “Hello Goodbye” would emerge from footage shot on 10 November 1967 at the Saville Theatre in London. The first film shot featured The Beatles in their Sgt. Pepper uniforms performing against a psychedelic backdrop and featured cutaways to The Beatles, seated and waving, wearing their grey, collarless stage suits from 1963, while over the coda they are joined on the stage by female hula dancers.

For “Revolution” The Beatles sang live to a prerecorded tape. One of the promotional films would make its debut (and only contemporary screening) in the UK on Top of the Pops on 19 September 1968. “Revolution 1” was the first track recorded for The White Album, the initial takes were recorded with the aim of it being a possible single.

On 4 September 1968 The Beatles filmed promotional clips for “Hey Jude” and “Revolution” at Twickenham Film Studios. This promotional film for “Hey Jude” debuted on Frost on Sunday in the United Kingdom on 8 September 1968 surrounded by members of the studio audience. In this version The Beatles broke into an impromptu rendition of Elvis Presley’s “It’s Now Or Never”, although this was edited out of the broadcast. A 36-piece orchestra was also assembled, the members wearing white tuxedos, and 300 extras were brought in for the finale. The latter had been recruited after 20 students handed out leaflets in the area, and The Beatles’ assistant Mal Evans invited a number of fans from outside EMI Studios.

Complied from home movies showing the four band members and their wives this became the final music video made while all four Beatles were together as a band. The single “Something”, backed by “Come Together”, (both from Abbey Road) was released on 6 October 1969 in the United States and 31 October 1969 in the United Kingdom, just as The Beatles were on the verge of breaking up – George Harrison’s first Beatles single A-side. Since the individual Beatles had drifted apart by this time, each of The Beatles and their wives were shot around their respective homes. The individual footage was then edited together to create the promotional film for “Something”.

On 30 January 1969, The Beatles enacted the final public performance of their career with an unannounced concert held from the rooftop of their Apple Corps headquarters at 3 Savile Row, London. Joined by keyboardist Billy Preston on electric piano, the band played a 42-minute set before the Metropolitan Police asked them to turn down the volume. The concert ended with the conclusion of “Get Back”, with John Lennon joking, “I’d like to say thank you on behalf of the group and ourselves and I hope we’ve passed the audition.”