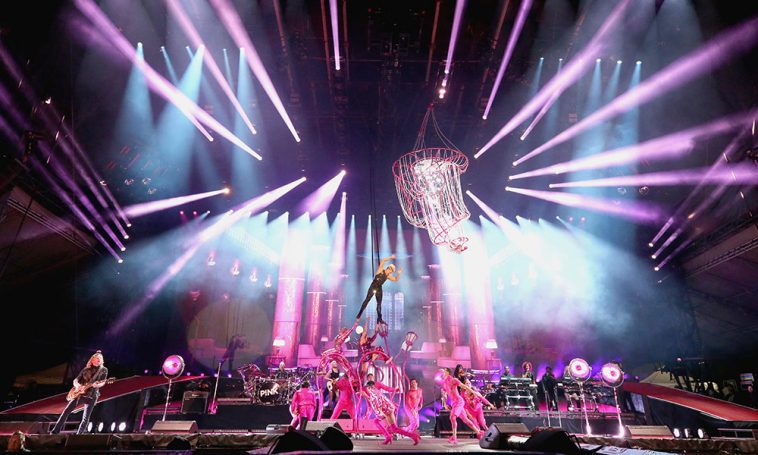 2. Pink was trained as a competitive gymnast between the ages 4 and 12.

3. She took the name ‘Pink’ from the character ‘Mr. Pink’ in Quentin Tarantino’s film Reservoir Dogs. Seeing the movie with friends, they all agreed that she resembled the character

4. She was originally a member of the all-female group Basic Instinct and later the group Choice in 1995 and was also the lead singer of the rock band Middleground before getting a record deal.

5. Pink won the trophy for Female New Artist of the Year at the 2000 Billboard Music Awards.

6. She was billed as a supporting act on the North American leg of NSYNC’s No Strings Attached Tour throughout the summer of 2000.

7. Pink, alongside singers Christina Aguilera and Mýa as well as rapper Lil’ Kim, performed a cover of ‘Lady Marmalade’ for the soundtrack of the film Moulin Rouge! In the US it became the most successful airplay-only single in history, as well as Pink’s first number one single.

8. For her second studio album Pink recruited Linda Perry, former singer of 4 Non Blondes (one of Pink’s favorite groups in her teenage years). Pink moved into Perry’s Los Angeles home where the pair spent several months writing songs. ‘Get the Party Started’, ‘Don’t Let Me Get Me’ and ‘Just like a Pill’ became hits on the Billboard Hot 100, peaking inside the top 10 between 2001 and 2002.

9. The music video for ‘Get the Party Started’ features the song’s composer, Linda Perry, seen as a bartender.

11. Pink is an animal-rights activist and a prominent campaigner for PETA, contributing her voice toward causes such as the protest against KFC. In 2015, she posed nude for PETA’s ‘I’d Rather Go Naked Than Wear Fur’, campaign.

12. Pink is married to American former professional freestyle motocross racer Carey Hart who is known for being the first motorcyclist to perform a back flip on a 250cc motorcycle during a competition.

13. During her I’m Not Dead Tour, for which ticket sales in Australia were particularly high; she sold approximately 307,000 tickets, giving her the record for the biggest concert attendance for an arena tour by a female artist. The album I’m Not Dead also proved popular in Australia, with six top five singles and a record-breaking 62 weeks in the top 10.

14. During the show on her 2010 The Funhouse Summer Carnival Tour in Nürnberg, whilst performing ‘So What’, Pink was not attached to her harness properly and fell, landing on the barricade. The song was immediately stopped and Pink was rushed to hospital. The stunt was later removed from the show.

16. Being a passionate campaigner for PETA, she once sent a letter to Prince William criticizing him for fox hunting and to Queen Elizabeth II protesting the use of real fur in bearskins of the Honourable Artillery Company and the Foot Guards.

17. A chartered 747 jumbo jet transported Pink and cast for the 142 date The Truth About Love Tour along with nineteen semi-trailers and eighty crew members employed to set up 400 tons of equipment.

18. Pink was the third highest grossing female touring artist of 2013, behind Beyoncé and Taylor Swift.

19. She was awarded a Star on the Hollywood Walk of Fame for Recording at 6801 Hollywood Boulevard in Hollywood, California on February 5, 2019.