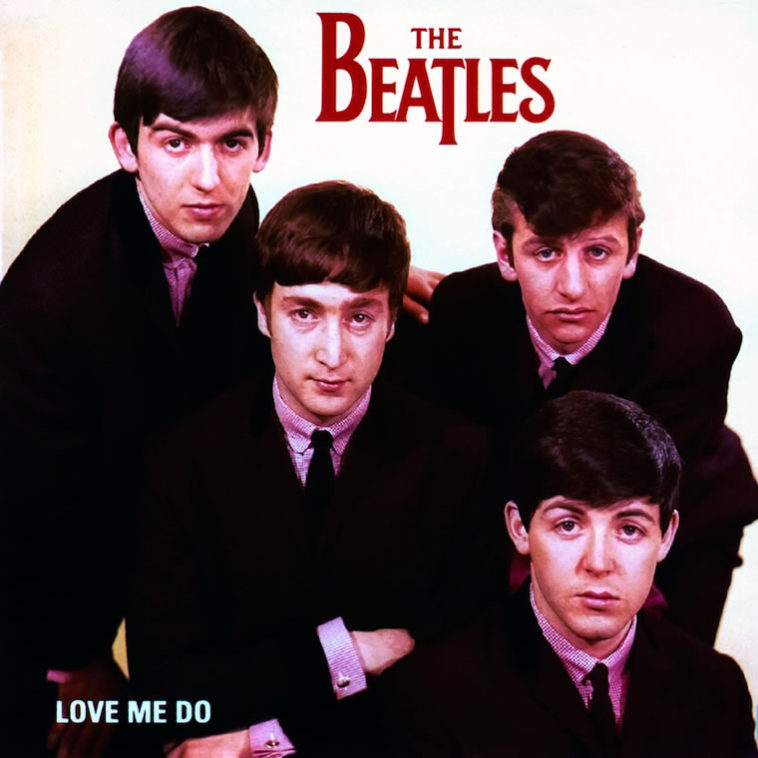 On the evening of 5th October 1962, with its powerful transmitter broadcasting to the UK on 208 Meters on the Medium Wave band (AM to our US readers) Radio Luxembourg played a new song, a simple song, in which the singers sang the word ‘love’ a total of 23 times. It was raw, it was sexy, and an almost complete rebuttal of the saccharine, over-produced pap prevalent at the time.

Beatles producer George Martin said when The Beatles “Love Me Do” was released, on Friday 5th October 1962, it was the day the world changed, and the world has consistently agreed with him ever since.

Liverpool, in the North West of England, was approaching the winter of 1962 with rocketing unemployment rates and the worst slums in Europe, and yet it was also the world’s biggest port. Even as the deadly game of bluff, played with nuclear weapons, was enacted as The Cold War between East and West, some of Liverpool’s’ youth had been reaching out across the oceans to pursue the rock ‘n’ roll dream, inspired by the groundbreaking efforts of Elvis Presley in the USA, and, closer to home, the example of do it yourself music as led by British singer / banjo player Lonnie Donegan.

Amidst a bleak economic backdrop, five young men from Liverpool had been slowly learning their craft in Hamburg, Germany as a rock ‘n’ roll band (they left one behind). The unbeatable Hamburg apprenticeship of 4-hour sets, 7 days a week, meant that when the leaner, and certainly hungrier, quartet returned to their home city, they were able to whip up excitement in audiences inspired by their musicianship, showmanship and sheer enthusiasm.

Label head and producer George Martin wasn’t initially bowled over by the lads’ musicianship or compositions, but he was impressed with their self-confident insouciance, and something in his gut told him to take a chance.

Even when the band had signed, they were determined to be individual, refusing to release a song suggested by George Martin, even though he assured them it would be a hit. (It was – the song was ‘How Do You Do It?’, a chart-topper in 1963 when recorded by Gerry & The Pacemakers. History shows that The Beatles’ instincts were correct, though).

George Martin does deserve credit for his control of the recording session for ‘Love Me Do’, in which he made a vital change to the arrangement. It was a very early Lennon–McCartney composition, principally written by the 16-year old Paul McCartney while playing truant from school, with John Lennon later adding the middle eight section (starting with “Someone to love…”) to complete the song, Their practice at the time was to scribble songs in a school notebook, and, in their dreams of future respect as professional songwriters, to always write “Another Lennon-McCartney Original” at the top of the page.

Having been promised a deal by George Martin in the spring, The Beatles formally signed to Parlophone on June 4th 1962 and had their first recording session at London’s EMI Studios in Abbey Road on 6th June with Pete Best on drums. After Martin expressed concern over Best’s level of technique, The Beatles returned to London three months later, on 4 September, with their new drummer, Ringo Starr, formerly of Rory Storm and the Hurricanes. A controversial decision at the time in Liverpool, since Best had his own coterie of personal fans, the band’s decision has been more than vindicated by the excellent rhythm parts of Ringo since then, but also by a perusal of the original recorded version of ‘Love Me Do’: Ringo adds the final ingredient to The Beatles’ mix of originality, the swinging new version sounding like a completely new song.

“Love Me Do” kicks off with John Lennon playing a bluesy dry harmonica riff, having learnt to play as a child after his Uncle George introduced him to the instrument. The actual harmonica being used at this time was one stolen by the light-fingered Lennon from a music shop in Arnhem, the Netherlands, in 1960, as the Beatles first journeyed to Hamburg. It has been much reported that Delbert McClinton, who supplied the distinctive harp riff on Bruce Channel’s ‘Hey Baby’, taught Lennon to play, but this isn’t strictly accurate. ‘Hey Baby’ was already in the Beatles’ repertoire, and The Beatles did open for Bruce Channel when he appeared at Liverpool’s Tower Ballroom, but that was on June 21st, so McClinton merely gave Lennon a few pointers.

The song features Lennon and McCartney on joint lead vocals, in their best Everly Brothers style, harmonising during the beseeching “please” before McCartney sings the unaccompanied vocal line on the song’s title phrase, ‘Love Me Do’. Lennon had previously sung the title sections, but this change in arrangement was made in the studio under the direction of producer George Martin when he realised that the harmonica part encroached on the vocal, allowing McCartney’s solo voice to act as a contrast to the harmony work elsewhere.

After first checking into their Chelsea hotel on September 4th, The Beatles arrived at EMI Studios early in the afternoon where they set up their equipment in Studio 3 and began rehearsing six songs including: “Please Please Me”, “Love Me Do” and “How Do You Do It?”

One week later, on 11 September, the Beatles returned to the same studio where they made another recording of “Love Me Do” with session drummer Andy White on drums, as Martin was unhappy with the 4th September drum sound, relegating Ringo to tambourine. The first pressing of the single, however, did feature the Ringo Starr version, prompting Mark Lewisohn to later write: “Clearly, the 11 September version was not regarded as having been a significant improvement after all”. It was also later included on the compilation albums Rarities (American version) and Past Masters, Volume One. The Andy White version was included on the Beatles’ debut UK album, Please Please Me, The Beatles’ Hits EP, and all subsequent album releases on which “Love Me Do” was included. As the tambourine was not included on the 4 September recording, this is the easiest way to distinguish between the Starr and White recordings.

That first week of October 1962 saw The Tornadoes at No.1 on the UK singles chart with the instrumental “Telstar”, while The Four Seasons were at the top of the charts in the US with “Sherry”. The Rollin’ Stones, (as they were known during this period), played The Woodstock Hotel in Surrey to less than 200 people. The Who hadn’t yet met Keith Moon, and Bruce Springsteen, who had recently turned 13, had just bought his first guitar.

So it was with one foot in the established order of package tours and light entertainment shows, that The Beatles launched their debut. Compared to modern day promotional activities, where artists set out on a gruelling schedule of radio, TV and press interviews, The Beatles didn’t really have a plan. The day after “Love Me Do’ was released, in the afternoon the band made a special 15 mile trip to Dawson’s Music Shop in Widnes, Cheshire, to hold an in-store signing session, and in the evening they played at the Horticultural Dance at Hulme Hall, Port Sunlight, Birkenhead. The following day they appeared at The Cavern, Liverpool, and the next was spent recording a Radio Luxembourg special, The Friday Spectacular, before a live audience of 100. Still, in London, the following day The Beatles made a visit to the offices of Record Mirror in the hope that someone might review their new release. To finish the week off, they returned to Liverpool and played a lunchtime and evening show at The Cavern.

By the end of the month, The Beatles returned to Hamburg for a 14-night run at the Star Club, sharing the bill with Little Richard. Back in England, over the next two months, The Beatles continued to make the odd radio and TV appearance along with gigs in the North West.

During this time, airplay on the single was steadily increasing, and eventually, two days after Christmas, on December 27th 1962, The Beatles’ “Love Me Do” peaked on the Record Retailer Top 50 charts, at number 17, its highest position.

So, after a tough year, The Beatles had at least put themselves in the map. But, unbeknownst to the world, they had already got in the can the track that would place them at the top of the tree – “Please Please Me”, to be released in January 1963. That was to break them wide open, but in the meantime, The Beatles could spend their last New Year as normal humans before the madness and mayhem to come.